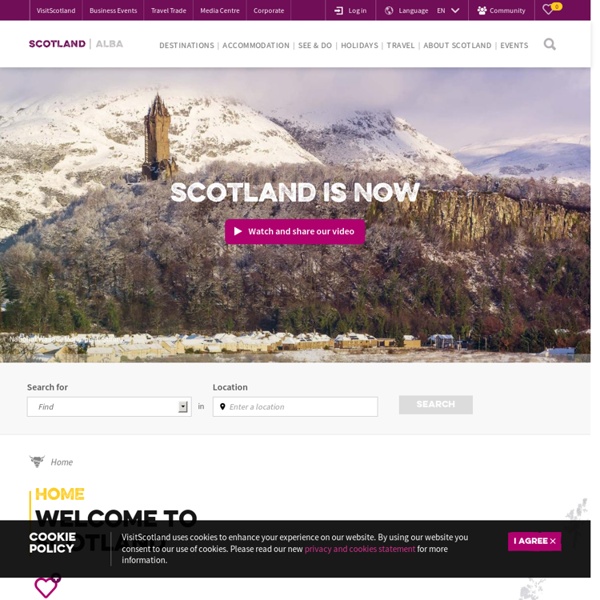 Come and discover Scotland, world-famous for its awesome scenery, vibrant culture and spectacular heritage. It’s a land packed with brilliant moments, those sights, sounds and experiences that make your break truly memorable, especially in 2014, our Year of Homecoming. You’re invited to join our year-long celebration of all that makes Scotland great and an amazing place to visit. Plan your break with great accommodation deals, helpful travel advice and inspiring ideas for what to see and do.

Against All Odds, England's Massive Chalk Horse Has Survived 3,000 Years If you stand in the valley near the village of Uffington in Oxfordshire, England, and look up at the high curve of chalk grassland above you, one thing dominates the view. Across the flank of the hill runs an enormous white, abstract stick figure horse cut from the chalk itself. It has a thin, sweeping body, stubby legs, a curiously long tail and a round eye set in a square head. This is the Uffington White Horse, the oldest of the English hill figures. It’s a 3,000-year-old pictogram the size of a football field and visible from 20 miles away. On this July morning black specks dot the lower slopes as small groups of people trudge slowly upwards.

Hill-walking and stalking Scotland has fantastic hill-walking opportunities, but summer and autumn are also important times for deer stalking, which supports the local economy and is essential for sustainable deer management. Here's some advice from the Scottish Outdoor Access Code to help you and land managers have a great day on the hill. From 1st July to 20th October (the stag stalking season) you should: Teenagers and UK culture Why bring UK culture to the teen classroom? We can introduce UK culture into the English classroom to help our students improve their English and at the same time learn about values and ways of doing things which may be different to theirs. Learning about life and culture in the UK can be very motivating as it brings the language alive for learners and creates a link between language and real life. See if you agree with these comments from teachers on teaching UK culture to their teenage learners:

On location: six walking trails made famous in TV and film Shetland Start/end Bird ObservatoryDistance 4 milesTime 2 hours if you go all the way south My first encounter with Shetland was Fair Isle, the most remote inhabited island in the UK. I washed up there, a university dropout, to be assistant cook in the bird observatory. It’s the island I know and love best, and it’s where the character DI Jimmy Perez in my Shetland series of murder mysteries was born. It’s also where the BBC filmed part of the adaptation of my book Blue Lightning for the series, and on this walk, you’ll glimpse many of the background scenes.

Isle of Skye Select area The Isle of Skye is a walkers' paradise. From family walks on the spectacular coastline to dramatic scrambles in the Cuillin mountains, the most challenging in Britain, the island provides fantastic walking for everyone. Let's talk about the UK (still with Scotland) At the beginning of the new school year teachers usually explain to their students what they are going to study. Sometimes efl teachers not only teach grammar but also British culture, so one of the first cultural topics they discuss with their students are the geography of the UK and its form of government. Here you can find an interactive mindmap, a digital poster and a collection of useful websites, just to simplify the work. Click on the Glogster digital poster below, you will find general information about the United Kingdom and some videos. Now take a look at my Cacoo mindmap below about the UK form of government. I have edited it with Thinglink to make it interactive.

Avoncroft Museum Historic Bldgs click 2x In 1963, a medieval town house in the village of Bromsgrove was scheduled for demolition to make way for a bypass until a local landowner decided to step in to save it. The house was painstakingly deconstructed, it’s parts labelled and packaged and shipped off to be reassembled in a field outside the town. The 1960s were a particularly brutal time for Britain’s historic buildings, as many remarkable structures were bulldozed in the name of progress to make way for shopping malls and motorways, and soon a number of other doomed buildings from all over the English Midlands and Wales followed the same fate. This assortment of saved structures became the basis for the Avoncroft Museum of Historic Buildings, which opened to the public in 1967.

ZoneCard Buy If you don’t have a ZoneCard, simply go to an SPT travel centre or staffed ScotRail station with a passport-sized photo of yourself. Proof of date of birth is needed for children under 16 years of age. Renew If you have already registered for ZoneCard, you can order a new card via our online ticket sales site. Britain is GREAT The GREAT Britain campaign showcases the very best of what Britain has to offer. We welcome the world to visit, study and do business with the UK. Business The UK’s dynamic economy and business-friendly environment make it a great place to locate and expand your business.

Avebury – Wiltshire, England Not far from the more famous Stonehenge and the mysterious Silbury Hill, the standing stones of Avebury form the world’s largest megalithic stone circle, but shed little light on the purpose behind their existence and that of their brethren. Likely placed around 2600 BCE, the circles within circles of stones at the site (now village) known as Avebury paint one of the more complete pictures of a prehistoric ritual site to be found anywhere in the world. It is believed that the broad Avebury henge contained around 600 standing stones, though only around 76 survive today after various preservation and excavation efforts, and a handful more are thought to still be buried.

Meals and Meal Times in English-Speaking Countries Years ago a student of mine came up to me after class, looking quite perplexed. She asked, ''Why do some English people eat dinner at midday or very early in the afternoon?'' That's a good question indeed, and the answer to it is not an easy one. Many foreigners find the terminology and customs that accompany eating in English-speaking countries quite baffling. For example, the word dinner is not only the name of the main evening meal eaten in these countries, but it can also be used for the meal eaten in the middle of the day. To understand this better, let's first travel back in time to the 16th and 18th-century England, where the men and women of nobility had a lot of free time on their hands.

Uffington White Horse click 2x In an area that includes an Iron Age hill fort and the place where St. George purportedly slew his allegorical dragon, the Uffington White Horse is perhaps the most remarkable site of all. The earliest reference to the Uffington White Horse comes from the late 11th century, by which time it was already a well-established geographical feature. Thus, speculation abounded for centuries as to the origin of the chalk-cut hill figure. Some suggested that it was created during the Anglo-Saxon era, either by King Alfred to celebrate his victory over the Danes in 871 or by Hengist, the first Saxon king, whose emblem was a white horse.

The Intriguing Carvings of Rosslyn Chapel Rosslyn Chapel (officially known as the Collegiate Chapel of St. Matthew) was a Roman Catholic chapel (it now belongs to the Scottish Episcopal Church) in Roslin, Midlothian, Scotland. Founded in the 15 th century by William Sinclair, 1 st Earl of the Caithness of the Scoto-Norman Sinclair family, the chapel took about 40 years to complete, perhaps due to the plethora of ornate stone carvings that can be seen adorning the walls throughout the chapel. The exquisite carvings are among the best in the whole of Europe, and portray scenes not found in any other 15th century chapel.

Shetland Mousa Broch click 2 x A mysterious round stone tower on the island of Mousa in northern Scotland is one of the best-preserved prehistoric structures in Europe. Dating back to the Iron Age, it is some 2,000 years old, and is the tallest of all the remaining brochs in the country. Believed to have been built between 300 and 100 BC, the broch of Mousa’s exact purpose is not known, though it is thought to have had two primary epochs of use. During the first, there was probably a wooden structure within the stone walls, which was later replaced by a wheelhouse.