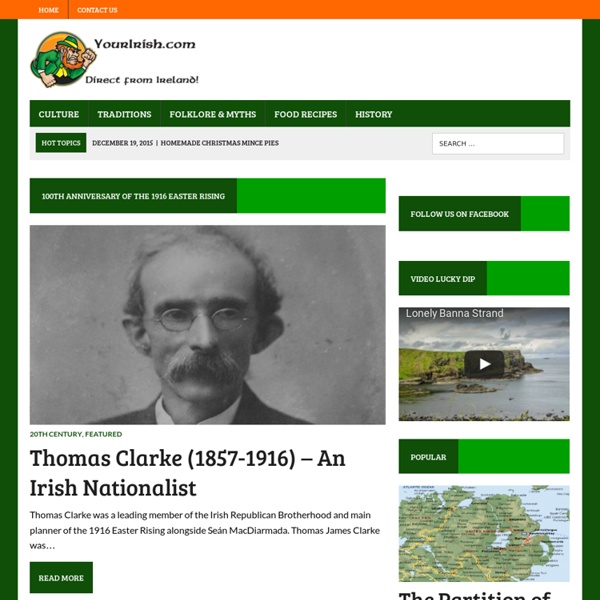 Irish culture and Irish customs - World Cultures European Irish Customs, Food and Fun Folklore for Your Family Reunion - CustomInk Celebrating culture and heritage is plenty of fun for Irish families when they get together for a family reunion. Ireland has a rich history of arts, music, dance, mythology, and cuisine. By introducing some of these aspects in a family reunion, it is a wonderful way of passing down parts of one’s heritage to the next generation. Many people in the U.S. have Irish ancestry. Even if you have not been to Ireland, there is still plenty you can do to celebrate the culture. Irish Traditions Irish song and dance have become well-known in the last couple of decades thanks to the award-winning touring show, Riverdance. Irish Food Although potatoes have come to be a bit of an Irish stereotype, they are usually joined by several other foods. Irish Folklore Most people are familiar with the image of the Irish leprechaun.

How St. Patrick's Day Works" Regardless of your heritage, you're prob­ably very aware of St. Patrick's Day. Celebrated each year on March 17, it's a day when people from all sorts of national and ethnic backgrounds dip a toe in Irish culture. Many observe the day by sporting a bright green shirt and meeting up with friends at a favorite local Irish pub. But there's a lot more to St. Patrick's Day than simply wearing green and knocking back a pint of Guinness. ­­For instance, who was Saint Patrick? As the luck of the Irish would have it, we've got the answers to these questions as well as lots more information about this historic holiday. Bobby Sands Biography Early Years A hero among Irish nationalists, Robert Gerard "Bobby" Sands was born in Belfast, Ireland on March 9, 1954. Bobby Sands was the oldest of four children born to John and Rosaleen Sands, and the couple's first son. At an early age, Sands's life was affected by the sharp divisions that shaped Northern Ireland. At the age of 10, he was forced to move with his family out of their neighborhood due to repeated intimidation by British loyalists. "I was only a working-class boy from a Nationalist ghetto," Sands later wrote about his childhood. Loyalist intimidation proved to be a theme in Sands's life. Activism The steady number of conflicts pushed Sands to join the Republican Movement in 1972. In late 1976, authorities arrested Sands again, this time in connection with a bombing that had taken place at a large furniture company, and an ensuing gun battle. As a prisoner, Sands's stature only grew. Death and Legacy

Northern Ireland: A brief background to the conflict FAQs ABOUT NORTHERN IRELAND Ireland's history is a long story of suffering, suppression and poverty, but also one of strong people who refuse to give up and who manage to see things from a humorous side in the face of hardship. After most of Ireland got its freedom from Britain, the northern part remained in union with England, Scotland and Wales. In the following text we will look at some frequently asked questions (FAQs) in connection with the situation in Northern Ireland. Note: To find out more about the history of the conflict and the current situation in Northern Ireland, go to the links given below. What is the difference between Ireland and Northern Ireland? Ireland – or the Republic of Ireland as it is officially named – is now a completely separate country and has no longer any formal bond to the UK. Copyright: Getty Images Why is there so much talk of Catholics and Protestants in the conflict in Northern Ireland? Why has this separation between the two Irish nations taken place?

Authentic video in the classroom: Ireland II | Elisabeth Horn My second example of utilising authentic video in the EFL classroom is based on the same 50-minute travel video as my first. Of course, one can apply this to any video, but this time I will stick with Ireland. How I do it now will, however, differ from my last post because now I’ll concentrate on the language and vocabulary awareness in detail (but I wouldn’t use both methods on the same video in the same class, though). This approach is, however, associated with a lot of painstaking preparatory work for the teacher, because transcription of the video material needs to be done, at least for some of the clips. It takes about 1 hour to take down 5 minutes of video material, so one needs plenty of time to get a complete transcript. I rather enjoy transcribing videos and sound; oddly enough I experience the process as relaxing, especially if there is no deadline approaching. The “game board” that the students start out with looks like this: 1. 2. 3. 4A Road bowling 4B Janus the fertility god

The Irish in Film -- The Complete Database of Irish Movies Northern Ireland Scene 1 Transcript Stephen: Come on, Ash. You said you wanted to see the scenery and you keep looking at the guidebook. Ashlie: Yes, it’s just really interesting finding out a bit more about all the places along this coast. Stephen: We’re here in Northern Ireland. Ashlie: This scenery is beautiful, but lots of places here also have interesting stories. Stephen: We’re here to visit the Giant’s Causeway, one of the most famous attractions in Northern Ireland. Ashlie: Not far to go now. Ashlie: Don’t you think this coastline is just beautiful, Stephen? Stephen: You can see why people might say that. Stephen: Hi. Surf Shop Assistant: Don’t worry about it. Ashlie: Yes, we’re both good swimmers. Surf Shop Assistant: Don’t worry about the cold. Ashlie: Great, thank you! Ashlie: That looks pretty hard, Stephen. Stephen: I might be able to, but you won’t! Ashlie: Hi there. Instructor: Absolutely – no problem. Stephen: That’s excellent! Instructor: We’re going to start off on the beach first of all, guys.

BBC Wales - History - Themes - Who was Arthur? BBC Wales - History - Themes - Origins of the legend BBC Wales - History - Themes - Geoffrey of Monmouth Celtic Holidays and Festivals The information on these pages are a collection of both authentic Celtic holidays and their modern translation. Tradition holds that each holiday is celebrated from sunset on the day before the actual holiday to sunset on the day following the actual holiday, thusly three days centering around that holiday. Click to see large version Notes: Folklore has it that in the three days preceding Samhain, the Sun God Lugh, maimed at Lughnassadh, dies by the hand of his Tánaiste (counterpart or heir), the Lord of Misrule. What we like to do: Besides scare the local children dressed as silent hags with red apples and candies, we attend a Walk of the Dead in a local ghost town on Nov 2nd, walking from the center of town to the cemetery, praying for those who have gone before. Read more about Halloween history and traditions HERE. Notes: The Druids felt the sun stood still for twelve days during this season and the Yule log was burnt to insure light for those days.