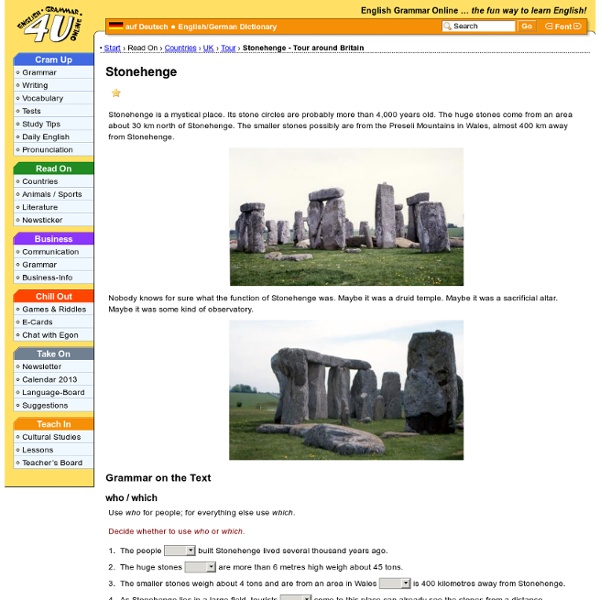 Stonehenge is a mystical place. Its stone circles are probably more than 4,000 years old. The huge stones come from an area about 30 km north of Stonehenge. The smaller stones possibly are from the Preseli Mountains in Wales, almost 400 km away from Stonehenge. Nobody knows for sure what the function of Stonehenge was. Maybe it was a druid temple. Related:  Great Britain

Listening: A Tour of London Tower Bridge, London (Copyright: Getty) When you visit a city for the first time, a good way to explore it is to go on an organised sightseeing tour. The tour will give you an overview of what there is to see and also provide you with some historical background. A popular way of seeing London is to go in one of the red double deck buses. This tour will take you around London by bus. Listen to the guide, and then do the activity below. Activity Check how well you know London. a Madame Tussaud’s is a famous wax museum. b Bond Street is where the detective, Sherlock Holmes, once lived. c Marble Arch is a gate which was built in 1827. d Hyde Park used to be the royal hunting grounds. e Buckingham Palace is the London home of the Queen. f Piccadilly Circus is the largest circus in the world. g Fleet Street once housed the national newspapers. h St Paul’s Cathedral is a small but beautiful church. i The Tower of London is more than 900 years old. j The Globe is the world’s oldest restaurant.

ProjectBritain.com - A resource of British Life and Culture in the UK by Woodlands Junior Geography of the UK The official title of the UK is the United Kingdom of Great Britain and Northern Ireland . Great Britain (the formerly separate realms of England and Scotland, and the principality of Wales. ) Northern Ireland (also known as Ulster) Numerous smaller islands including the Isle of Wight, Anglesey, and the Scilly, Orkney, Shetland, and Hebridean archipelagos. The UK is an island nation in Western Europe just off the coast of France. The mainland areas lie between latitudes 49°N and 59°N and longitudes 8°W to 2°E. The UK lies between the North Atlantic Ocean and the North Sea, and comes within 35 km (22 miles) of the northwest coast of France, from which it is separated by the English Channel. The UK has a total area of approximately 245,000 km², almost a quarter-of-a-million square kilometres. The UK is made up of several islands. The UK is bordered by four seas: Scotland and Wales are the most mountainous parts of the UK. Lakes Find out more about the landscape of England

British Royal Family Arms Royal Coat of Arms The main element of the Royal Arms is the shield which is divided into four quarters (see diagram). The three golden lions on a red background, symbolising England, occupy the first and fourth quarters. The lion and the unicorn supporting the shield represent England and Scotland respectively. Around the shield is a belt or strap with the motto Honi soit qui mal y pense ("Evil to him who evil thinks"), the symbol of the Order of the Garter. The Royal Arms we see today have evolved over nine centuries, since Richard 1st (the Lionheart) chose a shield of three lions to represent the three areas England, Normandy and Aquitaine - which were associated with the English crown. This symbol on the King's shield would immediately identify him in the midst of battle. The Arms of the Stuart kings remained very similar to those of James 1st. The succession of George, Elector of Hanover, to the throne as George 1st in 1714 led to further changes to include his territories.

Vandana Shiva: Everything I Need to Know I Learned in the Forest Today, at a time of multiple crises, we need to move away from thinking of nature as dead matter to valuing her biodiversity, clean water, and seeds. For this, nature herself is the best teacher. My ecological journey started in the forests of the Himalaya. My father was a forest conservator, and my mother became a farmer after fleeing the tragic partition of India and Pakistan. It is from the Himalayan forests and ecosystems that I learned most of what I know about ecology. The songs and poems our mother composed for us were about trees, forests, and India’s forest civilizations. My involvement in the contemporary ecology movement began with “Chipko,” a nonviolent response to the large-scale deforestation that was taking place in the Himalayan region. In the 1970s, peasant women from my region in the Garhwal Himalaya had come out in defense of the forests. Logging had led to landslides and floods, and scarcity of water, fodder, and fuel. Beyond Monocultures The Dead-Earth Worldview