The Tower of London: an introduction 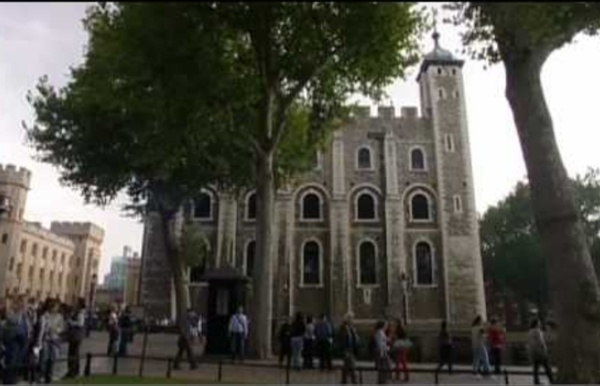 Stonehenge - Tour around Britain Stonehenge is a mystical place. Its stone circles are probably more than 4,000 years old. The huge stones come from an area about 30 km north of Stonehenge. Nobody knows for sure what the function of Stonehenge was. Listening: A Tour of London Tower Bridge, London (Copyright: Getty) When you visit a city for the first time, a good way to explore it is to go on an organised sightseeing tour. The tour will give you an overview of what there is to see and also provide you with some historical background. This tour will take you around London by bus. Activity Check how well you know London. a Madame Tussaud’s is a famous wax museum. b Bond Street is where the detective, Sherlock Holmes, once lived. c Marble Arch is a gate which was built in 1827. d Hyde Park used to be the royal hunting grounds. e Buckingham Palace is the London home of the Queen. f Piccadilly Circus is the largest circus in the world. g Fleet Street once housed the national newspapers. h St Paul’s Cathedral is a small but beautiful church. i The Tower of London is more than 900 years old. j The Globe is the world’s oldest restaurant.

Learning English - Home - The Natural History Museum, London: A Walk Through Time I was never a very outdoorsy child. Interested in old history and buildings rather than dresses and makeup, I was too busy building modern Barbie houses and with my nose in a book, to play skipping games and race around the playground kissing boys (ok, a little of that did happen, usually in the art cupboard if I’m honest). This means it was no real surprise that when the lovely Keri (from Ladies That Travel) and I had our plans of brunch and wandering through Londonscuppered by a bout of dismal weather, we decided to pop over to the Natural History Museum near South Kensington instead. Warning: Images contain animal skeletons & taxidermy. As a childhood favourite haunt of Keri’s and one that I grew to love in the first few years living in the UK, the Natural History Museum has a special place in both our hearts, and taking a wander – even on a busy weekend day – was a walk down memory lane. The displays rock. This is his replacement. Did we love our wander? Pin for later: Like this:

Vandana Shiva: Everything I Need to Know I Learned in the Forest Today, at a time of multiple crises, we need to move away from thinking of nature as dead matter to valuing her biodiversity, clean water, and seeds. For this, nature herself is the best teacher. My ecological journey started in the forests of the Himalaya. My involvement in the contemporary ecology movement began with “Chipko,” a nonviolent response to the large-scale deforestation that was taking place in the Himalayan region. In the 1970s, peasant women from my region in the Garhwal Himalaya had come out in defense of the forests. Logging had led to landslides and floods, and scarcity of water, fodder, and fuel. Women knew that the real value of forests was not the timber from a dead tree, but the springs and streams, food for their cattle, and fuel for their hearths. A folk song of that period said:These beautiful oaks and rhododendrons, They give us cool water Don’t cut these trees We have to keep them alive. The women sang back in chorus:What do the forests bear? Beyond Monocultures

7 ways for Modern Society to Reconnect with Nature I got a question recently which I spent a while pondering, and now am striving to try and put into words this idea that i’m having about the way that modern society and nature interact with each other. The question went something like – “If the Flower of Life is everything, then is stuff like traffic jams and office cubicles a representation of the Flower of Life too?” So far, the short answer that I have for that is “Yes and No”. There are parts of that which is true. What occurs to me however, is that around a certain point of that fractal, from the atoms to the molecules to the cells in your skin all the way to the clothes that you’re wearing, those geometric fundamentals break down in favor of man-made structures that are more removed from that original geometry. We take those fundamental patterns, and make stuff out of it. For example, did you know that Man made Plastic out of Oil? Of course, as many stories go with humans, that’s not what we did. 1. 2. We can learn a lot from that.