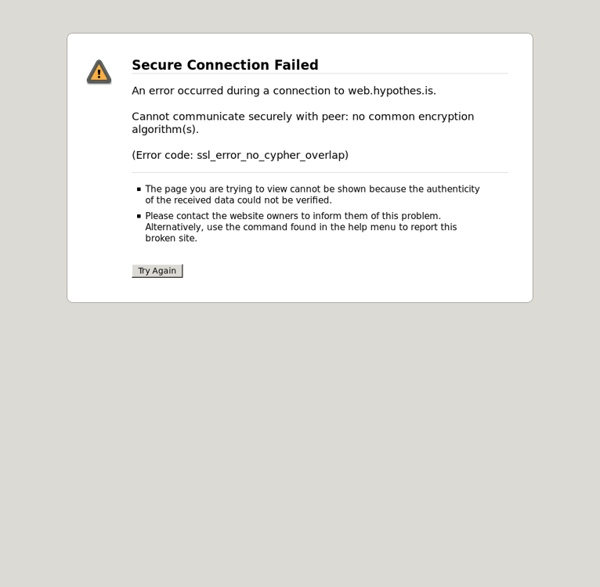 The Filter Bubble: How the Web Gives Us What We Want, and That's Not a Good Thing by Maria Popova How the web gives us what we want to see, and that’s not necessarily a good thing. Most of us are aware that our web experience is somewhat customized by our browsing history, social graph and other factors. But this sort of information-tailoring takes place on a much more sophisticated, deeper and far-reaching level than we dare suspect. I met Eli in March at TED, where he introduced the concepts from the book in one of this year’s best TED talks. The primary purpose of an editor [is] to extend the horizon of what people are interested in and what people know. What, exactly, is “the filter bubble”? EP: Your filter bubble is the personal universe of information that you live in online — unique and constructed just for you by the array of personalized filters that now power the web. How did you first get the idea of investigating this? EP: I came across a Google blog post declaring that search was personalized for everyone, and it blew my mind. Donating = Loving

Amazon is doing its real job: Squeezing retail chains One of the dramas in tech right now is the story around Amazon’s Kindle Fire tablet and its potential to mess up Apple’s iPad business. I don’t think the Kindle Fire (an okay-but-not-great media tablet) is a real, long-term threat to the iPad (the personal computer of the future, and potentially many more things). But that will take a while to sort out. The real story right now is that Amazon — both through its Kindle business and its broader e-commerce business — is driving retail chains crazy. This is by design, of course: Recall that e-commerce is still less than 5% of U.S. retail sales. So driving brick-and-mortar competitors into the ground and directing more spending toward Amazon is absolutely what Amazon should be putting most of its effort into. A brief rundown of recent cries for help from the retail chain world: Meanwhile, Wall Street expects Amazon to report 40% year-over-year sales growth for last quarter, and a profit.

Brain Pickings Peacetime CEO/Wartime CEO You’re lucky that I ain't the presidentCause I'll push the f*#king button and get it over withF&$k all that waiting and procrastinatingAnd all that goddamn negotiating—Bushwick Bill, Fuck a War TOM HAGEN Mike, why am I out?MICHAEL CORLEONE You're not a wartime consigliere. Things may get tough with the move we're trying. Recently, Eric Schmidt stepped down as CEO of Google and founder Larry Page took over. Definitions and Examples Peacetime in business means those times when a company has a large advantage vs. the competition in its core market, and its market is growing. In wartime, a company is fending off an imminent existential threat. A classic peacetime mission is Google’s effort to make the Internet faster. In my personal experience, I was a peacetime CEO for about 9 months, then a wartime CEO for the next 7 years. In peacetime, leaders must maximize and broaden the current opportunity. Peacetime CEO/Wartime CEO Peacetime CEO knows that proper protocol leads to winning.

Content Curation: definition and generation. | I Love SEO A lot has been already talked about Content Curation, meant as the capacity of filtering and adding value to the content we receive and are exposed to everyday from all the online sources (Search and Social). Content Curation is certainly more necessary than ever, a critical task in the business environment, not only in Marketing, Communications or Advertising, but it is especially so in areas such as Product, Innovation, Customer Service or Human Resources. Its impact goes far beyond the content we may generate. Really it is a state of mind affecting the monitoring, research, investigation and the way we listen to people and are able to discern what affects us what not. But what could be a definition of Content Curator? A content curator is a critical knowledge broker who seeks, collects and shares on a continuous base the most relevant content in her area of expertise. Initially, the term is attributed to Rohit Bhargava, who developed a Content Curation Manifesto in which he states:

The 5 Models Of Content Curation Curation has always been an underrated form of creation. The Getty Center in Los Angeles is one of the most frequently visited museums in America – and started as a private art collection from one man (J. Paul Getty) who had a passion for art. Aside from a few well known examples like this one, however, the term curation has rarely been used outside of the world of art … until now. One of the hottest trends in social media right now is content curation – thanks in no small part to the leading efforts of several thought leaders actively promoting the idea. Joe Pulizzi is a “content marketing evangelist” who speaks and writes often about content marketing publishes a list of the best content marketing blogs across the web. What Is Content Curation? Back in 2009 I published a blog post called the “Manifesto For The Content Curator” which predicted that this role would be one of the fastest growing and most important jobs of the future. The 5 Models Of Content Curation

Cash is no longer king Money in its physical form, in other words coins and notes, has played an important role in society for centuries. But today, society is becoming more and more “cash less”. And while consumers choose to use debit and credit cards, and mobile money services to complete their monetary transactions, they are not the ones leading the change. Retail stores, public transportation services and so on, see increasing costs and safety risks for handling cash and want digital transactions instead. So what role, if any, will cash play in the Networked Society? So many trends indicate that the Networked Society will be cash-free, for example passengers taking the bus in Stockholm can no longer use cash as a payment method and instead use an SMS-ticket system. Electronic money systems such as PayPal and M-Pesa are also simplifying the way money is being sent around the world, reducing the amount of cash that banks need to have at their disposal. Written by Mikael Eriksson Björling

Lessons Anyone Can Take From Their Local Diner Every town has them (especially the small ones), that one diner that everyone knows about and that has been a part of the community for years and years. You know, the one where you know the waitresses by name and can recite their menu? Ya, that place. When your product is in demand, you can make a few demands-For example the diner in town only accepts cash. Now for your homework: go down to your local diner, order your favorite meal and see if you notice the same things I did, it basically comes down to this: have a product people seek out, let others co-op your costs, become a community, not just a commodity. - Matthew King Awesome People + Awesome Places Travel around the world while making new friends Under30Experiences curates awesome experiences around the world for young travelers. Tags: business lessons, diner Category: Personal Branding, Startup Advice

Walmart Labs is building big data tools — and will then open source them — Cloud Computing News Geeks and Delegation: A Match Made in Hell Last week, I was invited to join 3,000 delegates to what turned out to be the largest entrepreneurship conference in the world. The Global Entrepreneurship Congress 2012 took place in Liverpool, UK (a few words about Liverpool in a moment) and its speakers and panels were selected in order to inspire us into entrepreneurial action. Upon arriving in Liverpool on the GEC Express Virgin train, chartered for the specific occasion (welcoming speech and random encounter with Sir Richard Branson), I didn’t know what to expect. One of the first things that I found out, to my surprise, was how geeky Liverpool is! It has more scientists than Cambridge and a booming game industry (it’s supposedly second in the UK). Sir Richard Branson was the main ”attraction” for the day and who could blame the the crowd? Q&A with Sir Richard Branson Delegation was the first skill I was forced to learn when I made the jump from a technical to a managerial position. Don’t drop the “ball”!