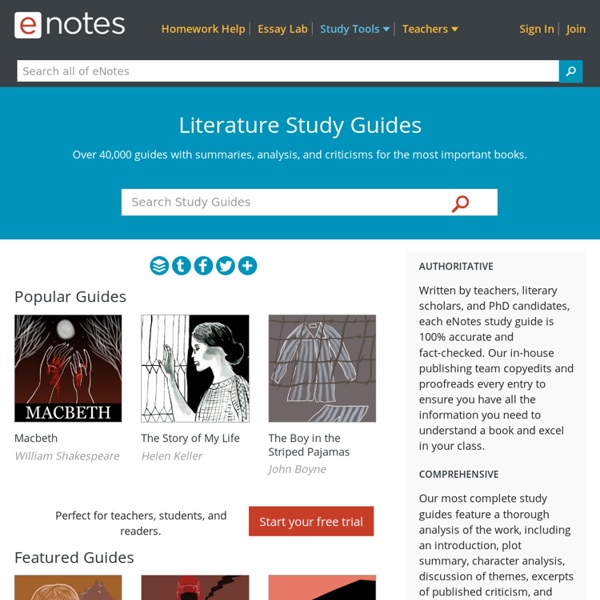 What Is an eNotes Study Guide? eNotes proudly features over 40,000 study guides on the most important books studied in classrooms across the globe. Each guide is specifically designed to meet the needs of high school and undergraduate college students and their teachers, as well as the interests of general readers. The purpose of an eNotes study guide is to accompany you through a literary work. As you read, it aids your understanding of the text by providing detailed chapter summaries as well as analysis of major themes, tropes, and characters. Working on an essay? Find an eNotes Study Guide

Virtual Reality / Hyper-Reality Virtual Reality / Hyper-Reality Virtuality and Simulation Imagine that you participated in a world where all the objects and all the people seemed real enough to touch but you knew--somewhere in your mind--that what you were experiencing was both constructed, and mediated by technology. The telephone, for example. You're pretty sure you're having a conversation with your friend as if he were in the room with you, and it's easy to feel that he's right there. Odwalla, Inc. Odwalla, Inc. is engaged in the manufacture of fruit-based beverages such as fruit juices and smoothies. The company also manufactures soy-based beverages and nutritional bars. History Odwalla was created in 1980 by Bonnie Bassett, Gerry Percy and Greg Steltenpohl in Santa Cruz, California. The three founders thought of marketing fruit juices and started the business by using a secondhand juicer to extract orange juice. They then sold their product to restaurants in the area. Five years after its foundation, Odwalla became incorporated and by 1988 had expanded its business to San Francisco.

Ancient Sumer with thanks to The History GuideWhat is good in a man's sight is evil for a god, What is evil to a man's mind is good for his god. Who can comprehend the counsel of the gods in heaven? The plan of a god is deep waters, who can fathom of it? Where has befuddled mankind ever learned what is a god's conduct? Queen Anne Style architecture (United States) In America, the Queen Anne style of architecture, furniture and decorative arts was popular in the United States from 1880 to 1910.[1] In American usage "Queen Anne" is loosely used of a wide range of picturesque buildings with "free Renaissance" (non-Gothic Revival) details rather than of a specific formulaic style in its own right. American Queen Anne style[edit] Queen Anne Style buildings in America came into vogue in the 1880s, replacing the French-derived Second Empire as the "style of the moment." The popularity of high Queen Anne Style waned in the early 1900s, but some elements, such as the wraparound front porch, continued to be found on buildings into the 1920s. The "Queen Anne" style that had been formulated in Britain by Norman Shaw and other architects arrived in New York with the new housing for the New York House and School of Industry[2] (Sidney V. Stratton, architect, 1878) at 120 West 16th Street.

In the following I will present some of Jean Baudrillard’s theoretical claims about the mass media in the postmodern era Mette Støttrup Jensen, The Teletubbies, Hyperreality and Narcissism Introduction In this assignment I wish to examine if the children’s television series the Teletubbies can be seen as a product of hyperreality and narcissism. To be able to do this I will introduce key concepts in Baudrillard’s theory about hyperreality, which, according to him, is the present state of affairs in what he calls the third order simulacra – and what is more commonly called postmodernity. Odwalla Gets Juiced Up [Daily Double] November 27, 2000 By Ticker: (Nasdaq: ODWA) Phone: ï¿½650-726-1888 Website: Price (11/24/00): $10.94 How Did It Double? "Odwalla came through the people of the Sun to warn them of the vanished legions and to teach them how they may increase their bounty through the practice of the drum and silent gong." ï¿½ï¿½-- "Illistrum" by Malachi Favors ï¿½ ï¿½ Vanished legions?

12 of the World’s Most Mysterious Monuments & Ruins 12 of the World’s Most Mysterious Monuments & Ruins Article by Steph, filed under Abandoned Places in the Architecture category. Around the world, in places as diverse as Homestead, Florida and Yonaguni, Japan stand monuments and ruins whose origins are shrouded in mystery. Compost Compost A homemade compost tumbler Compost (/ˈkɒmpɒst/ or /ˈkɒmpoʊst/) is organic matter that has been decomposed and recycled as a fertilizer and soil amendment. Major Philosophy: Experiments in Ontology: Baudrillard and Hyperreality One of Baudrillard’s key insights is that upon radicalization, every theory (or system) is subject to the form of reversibility. He is speaking specifically about systems of signification, but following the sentiments of his own methodology – that we take ideas to their extremes – can we not extend his notion of reversibility to other kinds of systems? The idea is that taken to the extreme, any theory or system will fold back on itself. An interesting way to read the concept ‘hyperreality’ is as a kind of reversal from simulation to reality. A simulation is a copy of some real. As simulation reaches totality, as it covers over the real completely, there is nothing left but simulation.