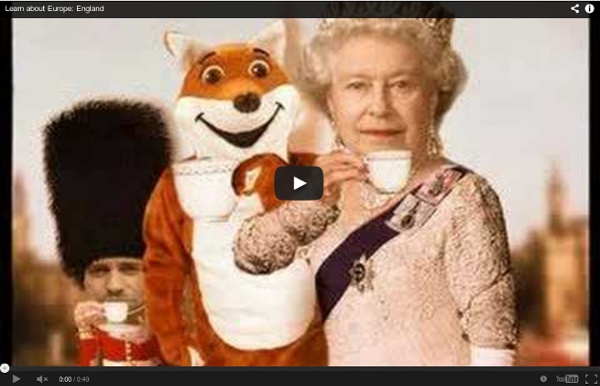 Let's talk about the UK (still with Scotland) At the beginning of the new school year teachers usually explain to their students what they are going to study. Sometimes efl teachers not only teach grammar but also British culture, so one of the first cultural topics they discuss with their students are the geography of the UK and its form of government. Here you can find an interactive mindmap, a digital poster and a collection of useful websites, just to simplify the work. Click on the Glogster digital poster below, you will find general information about the United Kingdom and some videos. Now take a look at my Cacoo mindmap below about the UK form of government. I have edited it with Thinglink to make it interactive. You can also click on the following link to enlarge the above image: Last September, 18th Scottish people voted for Scotland independence. Scottish referendum explained for non-Brits If you want more general information about the Uk government, the Queen and the Royal Family, open my Blendspace lesson.

Home Page : SEN Teacher ~ Free teaching resources for Special Needs. Listening: A Tour of London Tower Bridge, London (Copyright: Getty) When you visit a city for the first time, a good way to explore it is to go on an organised sightseeing tour. The tour will give you an overview of what there is to see and also provide you with some historical background. A popular way of seeing London is to go in one of the red double deck buses. This tour will take you around London by bus. Activity Check how well you know London. a Madame Tussaud’s is a famous wax museum. b Bond Street is where the detective, Sherlock Holmes, once lived. c Marble Arch is a gate which was built in 1827. d Hyde Park used to be the royal hunting grounds. e Buckingham Palace is the London home of the Queen. f Piccadilly Circus is the largest circus in the world. g Fleet Street once housed the national newspapers. h St Paul’s Cathedral is a small but beautiful church. i The Tower of London is more than 900 years old. j The Globe is the world’s oldest restaurant.

airasia QZ8501 blackbox Geography of the UK The official title of the UK is the United Kingdom of Great Britain and Northern Ireland . Great Britain (the formerly separate realms of England and Scotland, and the principality of Wales. ) Northern Ireland (also known as Ulster) Numerous smaller islands including the Isle of Wight, Anglesey, and the Scilly, Orkney, Shetland, and Hebridean archipelagos. The UK is an island nation in Western Europe just off the coast of France. The UK lies between the North Atlantic Ocean and the North Sea, and comes within 35 km (22 miles) of the northwest coast of France, from which it is separated by the English Channel. The UK has a total area of approximately 245,000 km², almost a quarter-of-a-million square kilometres. The UK is made up of several islands. The UK is bordered by four seas: to the south by the English Channel, which separates it from continental Europe to the east by the North Sea to the west by the Irish Sea and the Atlantic Ocean Lakes Find out more about the landscape of England

Lessons with Maps 2: Europe According To … This is a well overdue post from me, especially considering it was supposed to appear to coincide with the designerlessons presentation on “Classroom Cartography” at the TESOL Spain event at UAB back in February! Still, better late than never, and I hope you find this lesson as fun and productive as I and my students have. I have chosen the European map as the context for this lesson, but this can easily be changed as the Alphadesigner website, from which the maps below are taken, also includes maps of other continents. Level: Upper Intermediate, Advanced, Proficiency (B2-C2); Adults Lesson Aims To practise country names in EnglishTo develop the functions of speculation, summarising and distancing in relation to stereotypesTo develop creativityTo discuss the persistence of stereotypical viewsTo deal with ‘whatever else comes up’ (the lesson provides lots of opportunities for emergent language) Preparation Procedure 1. 2. from 3. Other examples: 4.

• Languages and education in the United Kingdom (UK) - Statistics & Facts There is no denying that the United Kingdom is a linguistically diverse nation, with languages from all over the globe spoken within its borders. However, English native speakers are often criticized, as most cannot speak another language. Education is often held to blame as the root of the problem, as not enough pupils are encouraged to take a language subject at school. It is not compulsory to study a language in post-16 education and the numbers of students studying a European language at A level (Higher level in Scotland) have been falling across the United Kingdom in recent years. However, the number of Modern Foreign Language students does not paint the full picture of the UK’s linguistic education. Furthermore, the numbers of pupils from non-English language backgrounds, that is to say children who have been exposed to other languages in the home during their childhood, have increased dramatically in recent years. This text provides general information.