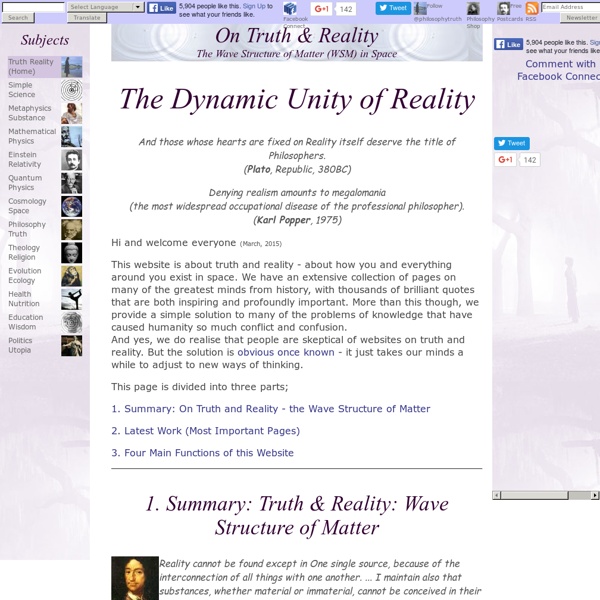 And those whose hearts are fixed on Reality itself deserve the title of Philosophers. (Plato, Republic, 380BC) Denying realism amounts to megalomania (the most widespread occupational disease of the professional philosopher). (Karl Popper, 1975) Hi and welcome everyone (March, 2012) This website is about truth and reality - about how you and everything around you exist in space.

Religion’s smart-people problem: The shaky intellectual foundations of absolute faith Should you believe in a God? Not according to most academic philosophers. A comprehensive survey revealed that only about 14 percent of English speaking professional philosophers are theists. As for what little religious belief remains among their colleagues, most professional philosophers regard it as a strange aberration among otherwise intelligent people. Among scientists the situation is much the same. Surveys of the members of the National Academy of Sciences, composed of the most prestigious scientists in the world, show that religious belief among them is practically nonexistent, about 7 percent.

Wayne Herschel author - The Hidden Records - discovered ancient alien star maps around the world showing human star origins - a true story now 'fictionalized' and twisted in PROMETHEUS movie David Bowie placed his name with the seven stars cipher personifying himself as the starman. He is Orion Man as the human blueprint message found in the other ancient star maps ref . No surprise as he played this role in a movie some time back as well.

Gibson's law See also[edit] Clarke's three laws, including Clarke's fourth law: "For every expert there is an equal and opposite expert." References[edit] Jump up ^ Proctor, Robert .N. (2004). Neuroscience of free will Neuroscience of free will is the part of neurophilosophy that studies the interconnections between free will and neuroscience. As it has become possible to study the living brain, researchers have begun to watch decision making processes at work. Findings could carry implications for our sense of agency and for moral responsibility and the role of consciousness in general.[1][2][3] Relevant findings include the pioneering study by Benjamin Libet and its subsequent redesigns; these studies were able to detect activity related to a decision to move, and the activity appears to begin briefly before people become conscious of it.[4] Other studies try to predict activity before overt action occurs.[5] Taken together, these various findings show that at least some actions - like moving a finger - are initiated unconsciously at first, and enter consciousness afterward.[6] A monk meditates. Overview[edit]

Positivism Positivism is the philosophy of science that information derived from logical and mathematical treatments and reports of sensory experience is the exclusive source of all authoritative knowledge,[1] and that there is valid knowledge (truth) only in this derived knowledge.[2] Verified data received from the senses are known as empirical evidence.[1] Positivism holds that society, like the physical world, operates according to general laws. Introspective and intuitive knowledge is rejected, as is metaphysics and theology. Although the positivist approach has been a recurrent theme in the history of western thought,[3] the modern sense of the approach was developed by the philosopher Auguste Comte in the early 19th century.[4] Comte argued that, much as the physical world operates according to gravity and other absolute laws, so does society.[5] Etymology[edit] Overview[edit] Antecedents[edit]

40 Astounding Facts You Should Know About Your Amazing Human Body Human fingers are so sensitive, that if your fingers were the size of Earth, you could feel the difference between a house and a car. With the 60,000 miles of blood vessels inside the average human body, you could circumnavigate Earth two and a half times. The human eye is so sensitive that if the Earth were flat, you could spot a candle flickering at night from up to 30 miles away. Nerve impulses travel to and from the brain at speeds of up to 250 miles per hour, faster than a Formula 1 racecar.

KrishnamurtiArchive Is it Possible to Live with Total Lucidity?J. Krishnamurti & Dr. Altruism Giving alms to the poor is often considered an altruistic action. Altruism or selflessness is the principle or practice of concern for the welfare of others. It is a traditional virtue in many cultures and a core aspect of various religious traditions and secular worldviews, though the concept of "others" toward whom concern should be directed can vary among cultures and religions.

Eye Movement and Lying - How to detect lies Interesting Info -> Lying Index -> Eye Direction & Visual Accessing Cues Eye Movement and Direction & How it Can Reveal Truth or Lies This is a continuation of our previous article Detecting Lies. Many comments by our visitors asked about how eye direction can indicate the presence of a lie. Can the direction a person's eyes reveal whether or not they are making a truthful statement? Taoism The word Tao means path or way, although the original meaning in Chinese philosophy and religion is more abstract. Behind all material things and all the change in the world lies one fundamental, universal principle which is the Way or Tao. This principle governs everything, all change and all life. Behind the multiplicity and contradictions of the world lies a unity: the Tao. The Power of the Way is Te. The purpose of human life is to live life according to the Tao.

The Movement of Meditation So we are asking, whether a brain, which is your brain, which is the brain of all human beings evolved through immemorial time, conditioned by cultures, religions, by economic, social pressures, that brain has had a timeless continuity till now, and in that duration it has found a sense of being safe. That is why you accept tradition. Because in tradition there is safety, in imitation there is safety, in conformity there is safety, and there is also safety in an illusion. Obviously. All your gods are illusions obviously, put up by thought.