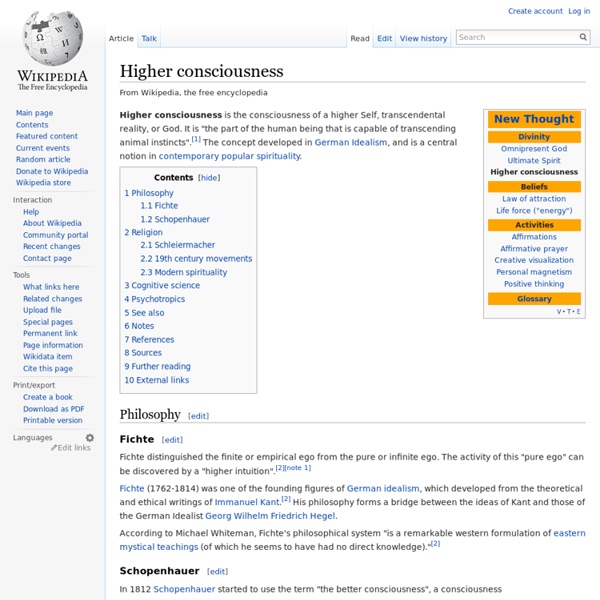 Higher consciousness is the consciousness of a higher Self, transcendental reality, or God. It is "the part of the human being that is capable of transcending animal instincts". The concept developed in German Idealism, and is a central notion in contemporary popular spirituality. Philosophy[edit] Fichte[edit] Fichte distinguished the finite or empirical ego from the pure or infinite ego. Fichte (1762-1814) was one of the founding figures of German idealism, which developed from the theoretical and ethical writings of Immanuel Kant. According to Michael Whiteman, Fichte's philosophical system "is a remarkable western formulation of eastern mystical teachings (of which he seems to have had no direct knowledge)." Schopenhauer[edit] In 1812 Schopenhauer started to use the term "the better consciousness", a consciousness ... According to Schopenhauer, The better consciousness in me lifts me into a world where there is no longer personality and causality or subject or object. Religion[edit]

Mithraic mysteries Double-faced Mithraic relief. Rome, 2nd to 3rd century AD (Louvre Museum) The Mithraic Mysteries were a mystery religion practised in the Roman Empire from about the 1st to 4th centuries AD. The name of the Persian god Mithra (proto-Indo-Iranian Mitra), adapted into Greek as Mithras, was linked to a new and distinctive imagery. Writers of the Roman Empire period referred to this mystery religion by phrases which can be anglicized as Mysteries of Mithras or Mysteries of the Persians;[1][2] modern historians refer to it as Mithraism,[1] or sometimes Roman Mithraism.[3][4] The mysteries were popular in the Roman military.[5] The Romans themselves regarded the mysteries as having Persian or Zoroastrian sources.

Theosophy Theosophy comes from the Greek theosophia (θεοσοφία), which combines theos (θεός), "God"[3] and sophia (σοφία), "wisdom," meaning "divine wisdom." From the late 19th century onwards, the term theosophy has generally been used to refer to the religio-philosophic doctrines of the Theosophical Society, founded in New York City in 1875 by Helena Blavatsky, William Quan Judge, and Henry Steel Olcott. Blavatsky's major work, The Secret Doctrine (1888), was one of the foundational works of modern theosophy.[4] As of 2015[update], members of organizations descended from, or related to, the Theosophical Society were active in more than 52 countries around the world.

Tacit knowledge Tacit knowledge (as opposed to formal, codified or explicit knowledge) is the kind of knowledge that is difficult to transfer to another person by means of writing it down or verbalizing it. For example, stating to someone that London is in the United Kingdom is a piece of explicit knowledge that can be written down, transmitted, and understood by a recipient. However, the ability to speak a language, knead dough, use algebra,[1] or design and use complex equipment requires all sorts of knowledge that is not always known explicitly, even by expert practitioners, and which is difficult or impossible to explicitly transfer to other users. While tacit knowledge appears to be simple, it has far-reaching consequences and is not widely understood. Definition[edit] The term “tacit knowing” or “tacit knowledge” was first introduced into philosophy by Michael Polanyi in 1958 in his magnum opus Personal Knowledge.

Web resources on consciousness, philosophy, and such Web resources related to consciousness, philosophy, and such. Compiled by David Chalmers Here are a small number of high-quality academic resources on the web that I find useful or interesting. Sol Invictus Coin of Emperor Probus, circa 280, with Sol Invictus riding a quadriga, with legend SOLI INVICTO, "to the Unconquered Sun": the Emperor (at left) wears a radiated solar crown, worn also by the god on the obverse The idea, particularly popular in the 18th and 19th centuries, that the date of 25 December for Christmas was selected in order to correspond with the Roman festival of Dies Natalis Solis Invicti, or "Birthday of the Unconquered Sun", is challenged today. Invictus as epithet[edit] Sol Invictus played a prominent role in the Mithraic mysteries, and was equated with Mithras himself.[15] The relation of the Mithraic Sol Invictus to the public cult of the deity with the same name is unclear and perhaps non-existent.[16]

Hoʻoponopono Hoʻoponopono (ho-o-pono-pono) is an ancient Hawaiian practice of reconciliation and forgiveness. Similar forgiveness practices were performed on islands throughout the South Pacific, including Samoa, Tahiti and New Zealand. Traditionally hoʻoponopono is practiced by healing priests or kahuna lapaʻau among family members of a person who is physically ill. Modern versions are performed within the family by a family elder, or by the individual alone.

Nous This article is about a philosophical term. For the philosophy journal, see Noûs. In philosophy, common English translations include "understanding" and "mind"; or sometimes "thought" or "reason" (in the sense of that which reasons, not the activity of reasoning).[2][3] It is also often described as something equivalent to perception except that it works within the mind ("the mind's eye").[4] It has been suggested that the basic meaning is something like "awareness".[5] In colloquial British English, nous also denotes "good sense", which is close to one everyday meaning it had in Ancient Greece.