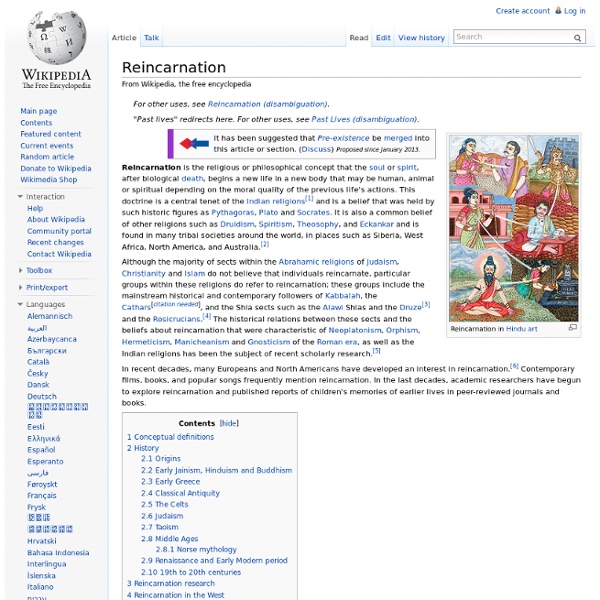 Reincarnation is the religious or philosophical concept that the soul or spirit, after biological death, begins a new life in a new body that may be human, animal or spiritual depending on the moral quality of the previous life's actions. This doctrine is a central tenet of the Indian religions.[1] It is also a common belief of various ancient and modern religions such as Spiritism, Theosophy, and Eckankar and is found in many tribal societies around the world, in places such as Siberia, West Africa, North America, and Australia.[2] In recent decades, many Europeans and North Americans have developed an interest in reincarnation.[6] Contemporary films, books, and popular songs frequently mention reincarnation. In the last decades, academic researchers have begun to explore reincarnation and published reports of children's memories of earlier lives in peer-reviewed journals and books. Conceptual definitions[edit] Temple door depicting Dashavatar-the ten avatars, Sree Balaji Temple, Goa.

Age of Aquarius Overview[edit] The approximate 2,150 years for each age corresponds to the average time it takes for the vernal equinox to move from one constellation of the zodiac into the next. This can be computed by dividing the earth's 25,800 year gyroscopic precession period by twelve, the number of Zodiac constellations used by astrologers. According to different astrologers' calculations, approximated dates for entering the Age of Aquarius range from 1447 AD (Terry MacKinnell) to 3597 (John Addey).[2] Astrologers do not agree on when the Aquarian age will start or even if it has already started.[3] Nicholas Campion in The Book of World Horoscopes lists various references from mainly astrological sources for the start of the Age of Aquarius. Astrological ages exist as a result of precession of the equinoxes. Astrological meaning[edit] Astrologers believe that an astrological age affects mankind, possibly by influencing the rise and fall of civilisations or cultural tendencies. David Williams[edit]

Agnosticism Agnostosticism is the belief that claims concerning God and certain accompanying religious or metaphysical beliefs cannot be proven either way. The truth is not known so it cannot be argued. In the words of Jorge Luis Borges, a famous Argentinian writer and poet: Many Atheists discover that the proper for their beliefs would actually be Agnostic, while some Agnostics occasionally refer to themselves as Atheists, just to 'keep it simple'. However, as in his essay ' Am I An Atheist Or An Agnostic? Read " Am I An Atheist Or An Agnostic? The History of Agnosticism Even though the term is somewhat modern, coined by Thomas Henry Huxley who first mentioned it in his speech given in 1876, is ancient! An excerpt from an ancient sacred text of Hinduism called Rigveda (~1700-1100 BCE) , or more specifically the Nasadiya Sukta, a creation hymn, says: " {*style:<i><b>Who really knows? Whence is this creation? Who then knows whence it has arisen?

Metempsychosis Transmigration of the soul Europe before the pre-Socratic philosophers[edit] In Greek philosophy[edit] The earliest Greek thinker with whom metempsychosis is connected is Pherecydes of Syros,[8] but Pythagoras, who is said to have been his pupil, is its first famous philosophic exponent. In later Greek literature the doctrine appears from time to time; it is mentioned in a fragment of Menander (the Inspired Woman) and satirized by Lucian (Gallus 18 seq.). Post-Classical occurrence[edit] Metempsychosis was a part of the Neo-Manichaen dogma of the Albigenses around France in the 12th century.[11] Created in the early XVth century, the Rosicrucianist movement also conveyed an occult doctrine of metempsychosis.[12] In literature after the classical era[edit] "Metempsychosis" is the title of a longer work by the metaphysical poet John Donne, written in 1601.[13] The poem, also known as the Infinitati Sacrum,[14] consists of two parts, the "Epistle" and "The Progress of the Soule". See also[edit]

Odyssey Epic poem attributed to Homer A 15th-century manuscript of the Odyssey, book i, written by the scribe John Rhosos for the Tornabuoni family, Florence, Italy (British Museum) Greek text of the Odyssey's opening passage The Odyssey (;[1] Greek: Ὀδύσσεια, Odýsseia; Attic Greek: [o.dýs.sej.ja]) is one of two major Ancient Greek poems attributed to Homer. In antiquity, Homer’s authorship of the Odyssey, along with the Iliad, was not widely questioned, but contemporary scholarship predominately assumes the poems were composed independently, and the stories themselves formed part of a long oral tradition.[2] It is believed that the Odyssey was written down near the end of the 8th century BC, somewhere in Ionia, the Greek coastal region of Anatolia,[3] and as such is one of the oldest extant works of literature often read by contemporary audiences.[4] A few noteworthy elements of the text are its non-linear plot, and the position of women and slaves as important narrative agents. Synopsis Structure

Spiritual Economics Now Deism & Pandeism Deism is the belief that a supreme power created the universe and that this, and other truths, can be determined using reason and by observing the natural world. For deists there is no need for faith, nor organized religion in order to come to these conclusions. Most deists don't see holy books and divine revelation as an authoritative source, but rather as interpretations by other humans. In the words of Thomas Paine, an author, inventor and one of the Founding Fathers of the United States: "The true Deist has but one Deity, and his religion consists in contemplating the power, wisdom, and benignity of the Deity in his works, and in endeavoring to imitate him in everything moral, scientifical, and mechanical." There are various verbal evasions deists use when referring to 'God'. Pandeism is a pantheistic form of deism, or a belief which is a mixture of pantheism and deism. Some pandeists refer to God as the Deus in order to differentiate their ideas from those of theists.

Pythagoras | Philosimply | Philosophy Made Easy Pythagoras was an ancient Greek philosopher born in Samos (an island near Miletus, the famed “birthplace of Greek philosophy”) in 570 BC. He was famous throughout Greece as the leader of a religious community (the Pythagoreans), for his belief that the soul is immortal and in the possibility of reincarnation, as well as for maintaining that numbers are the fundamental principle of the world. He was a charismatic figure who combined mathematics, mysticism, science and religion together to create a way of life with a devoted following. Today, he is best known for his theory about the hypotenuse of a triangle ( a2 + b2 = c2), what is known as the Pythagorean theorem. In Samos, Pythagoras studied the astronomy of Anaximander as well as the geometry of Thales, until leaving at the age of 40 when the tyrant Polycrates came to power. Pythagoras’s belief in the immortality of the soul and the possibility of reincarnation was a huge break from tradition.

Lavinium Gate into the interior of the settlement of the frazione of Pratica di Mare, a medieval walled village at the site of the center of ancient Lavinium. The structures in the photograph vary in date. On the left is the Castello Borghese, possibly the site of the Roman arx or citadel. The archaeological excavations are in a field off to the left of the photograph. The comune of Pomezia and the museum are directly behind the photographer. Lavinium was a port city of Latium, 53 km (33 mi) to the south of Rome, midway between the Tiber river at Ostia and Anzio. The location of Lavinium has never been lost to historians nor does there appear to have been any significant break in its habitation. Pratica di Mare is about 6 km (3.7 mi) from the Tyrrhenian Sea near the top of a slope descending to an alluvial shelf on which the Pratica di Mare Air Force Base has been placed. Archaeology[edit] Ex voto statues in the museum at Lavinium Legend and history[edit] Modern culture[edit] Notes[edit] Coordinates:

Love for Life | A strong immune system means protection from disease. A united community presents an impenetrable front against corruption! 'Am I An Atheist Or An Agnostic?' by Bertrand Russell ~ Agnosticis A Plea For Tolerance In The Face Of New Dogmas by Bertrand Russell (1947) I speak as one who was intended by my father to be brought up as a Rationalist. He was quite as much of a Rationalist as I am, but he died when I was three years old, and the Court of Chancery decided that I was to have the benefits of a Christian education. I think perhaps the Court of Chancery might have regretted that since. It does not seem to have done as much good as they hoped. They arise chiefly out of reaction to a system of education which considers it quite right that a father should decree that his son should be brought up as a Muggletonian, we will say, or brought up on any other kind of nonsense, but he must on no account be brought up to think rationally. Sin And The Bishops Don't Be Too Certain! The question of how to define Rationalism is not altogether an easy one. The question is how to arrive at your opinions and not what your opinions are. Proof of God Skepticism Persecution

Romulus Legendary founder and first king of Rome Romulus () was the legendary founder and first king of Rome. Various traditions attribute the establishment of many of Rome's oldest legal, political, religious, and social institutions to Romulus and his contemporaries. Although many of these traditions incorporate elements of folklore, and it is not clear to what extent a historical figure underlies the mythical Romulus, the events and institutions ascribed to him were central to the myths surrounding Rome's origins and cultural traditions. Traditional account[edit] The myths concerning Romulus involve several distinct episodes and figures: the miraculous birth and youth of Romulus and Remus, his twin brother; Remus' murder and the founding of Rome; the Rape of the Sabine Women; the war with the Sabines; Titus Tatius; the establishment of Roman institutions; and the death or apotheosis of Romulus, and succession of Numa Pompilius. Romulus and Remus[edit] Establishment of the city[edit] Tarpeia[edit]

America Can Be Free Seminar Support