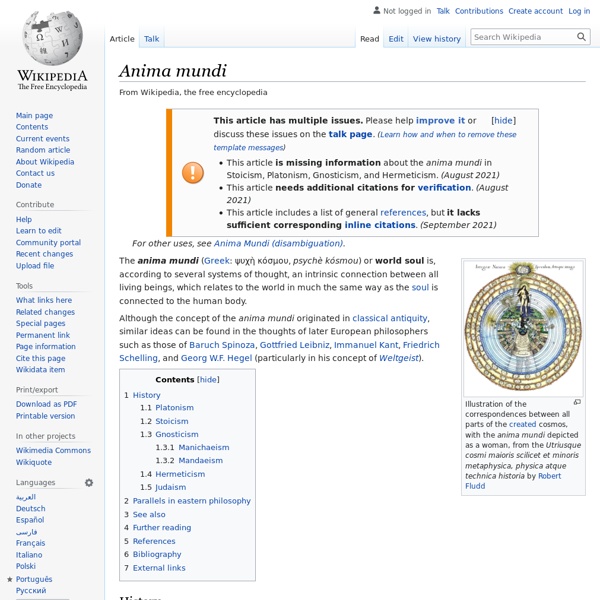 World soul Therefore, we may consequently state that: this world is indeed a living being endowed with a soul and intelligence ... a single visible living entity containing all other living entities, which by their nature are all related.[1] Other resemblances can be found in the thoughts of hermetic philosophers like Paracelsus, and by Baruch Spinoza, Gottfried Leibniz, Friedrich Schelling and in Hegel's Geist ("Spirit"/"Mind"). Ralph Waldo Emerson published "The Over-Soul" in 1841, which was influenced by the Hindu conception of a universal soul. There are also similarities with ideas developed since the 1960s by Gaia theorists such as James Lovelock.[citation needed] In Jewish mysticism, a parallel concept is that of "Chokhmah Ila'ah," the all-encompassing "Supernal Wisdom" that transcends, orders and vitalizes all of creation. See also[edit] References[edit] Related:  More 5

Theosophy Theosophy comes from the Greek theosophia (θεοσοφία), which combines theos (θεός), "God"[3] and sophia (σοφία), "wisdom," meaning "divine wisdom." From the late 19th century onwards, the term theosophy has generally been used to refer to the religio-philosophic doctrines of the Theosophical Society, founded in New York City in 1875 by Helena Blavatsky, William Quan Judge, and Henry Steel Olcott. Blavatsky's major work, The Secret Doctrine (1888), was one of the foundational works of modern theosophy.[4] As of 2015[update], members of organizations descended from, or related to, the Theosophical Society were active in more than 52 countries around the world.[a] Modern theosophy has also given rise to, or influenced, the development of other mystical, philosophical, and religious movements.[5] Etymology[edit] The term theosophia appeared (in both Greek and Latin) in the works of early church fathers, as a synonym for theology:[6] the theosophoi are "those who know divine matters Theosophy:

Some paradoxes - an anthology Philosopher's stone Legendary alchemical substance History[edit] Antiquity[edit] The earliest known written mention of the philosophers' stone is in the Cheirokmeta by Zosimos of Panopolis (c. 300 AD).[2] Alchemical writers assign a longer history. Middle Ages[edit] Early medieval alchemists built upon the work of Zosimos in the Byzantine Empire and the Arab empires. In the 11th century, there was a debate among Muslim world chemists on whether the transmutation of substances was possible. According to legend, the 13th-century scientist and philosopher Albertus Magnus is said to have discovered the philosophers' stone. Renaissance to early modern period[edit] The Squared Circle: an alchemical symbol (17th century) illustrating the interplay of the four elements of matter symbolising the philosophers' stone The English philosopher Sir Thomas Browne in his spiritual testament Religio Medici (1643) identified the religious aspect of the quest for the philosopher's Stone when declaring: Properties[edit] Names[edit]

Spiritual practice A spiritual practice or spiritual discipline (often including spiritual exercises ) is the regular or full-time performance of actions and activities undertaken for the purpose of cultivating spiritual development . A common metaphor used in the spiritual traditions of the world's great religions is that of walking a path. [ 1 ] Therefore a spiritual practice moves a person along a path towards a goal. The goal is variously referred to as salvation , liberation or union (with God). [ edit ] Abrahamic religions [ edit ] Baha'i Faith Prayer in the Bahá'í Faith refers to two distinct concepts: obligatory prayer and devotional prayer (general prayer). [ edit ] Christianity In the Catholic tradition, spiritual disciplines may include: prayer , fasting, acts of mercy, Sacraments (e.g., Baptism & Eucharist ), monasticism , chanting , celibacy , the use of prayer beads , mortification of the flesh , Christian meditation , and Lectio Divina . [ edit ] Islam [ edit ] Judaism [ edit ] Indian religions

Rosary of the Philosophers Woodcut illustrating the illuminatio stage, captioned "Here Sol plainly dies again, And is drowned with the Mercury of the Philosophers." The Rosary of the Philosophers (Rosarium philosophorum sive pretiosissimum donum Dei) is a 16th-century alchemical treatise. It was published in 1550 as part II of De Alchimia Opuscula complura veterum philosophorum (Frankfurt). The term rosary in the title is unrelated to the Catholic prayer beads; it refers to a "rose garden", metaphoric of an anthology or collection of wise sayings. The 1550 print includes a series of 20 woodcuts with German-language captions, plus a title page showing a group of philosophers disputing about the production of the lapis philosophorum. The Artis auriferae, printed in 1572 in Basel, reproduced the 20 illustrations as re-cut woodcuts. Manuscripts[edit] The Latin text also survives in numerous manuscripts, none of them predating the 1550 print edition. late 16th century Glasgow University Library MS. Translations[edit]

Emerald Tablet Alchemical and Hermetic text An imaginative 17th century depiction of the Emerald Tablet from the work of Heinrich Khunrath, 1606. The Emerald Tablet, also known as the Smaragdine Tablet, or Tabula Smaragdina, is a compact and cryptic piece of the Hermetica reputed to contain the secret of the prima materia and its transmutation. The layers of meaning in the Emerald Tablet have been associated with the creation of the philosopher's stone, as well as with other esoteric ideas. Textual history[edit] Following Balinas, an early version of the Emerald Tablet appeared in Kitab Sirr al-Asrar (Book of the Secret of Creation and the Art of Nature), a composite of earlier works, and in Kitab Ustuqus al-Uss al-Thani (Second Book of the Elements of Foundation) attributed to Jabir ibn Hayyan.[6] The Smaragdine Tablet was first translated into Latin in the twelfth century by Hugo of Santalla.[7] The text also appears in a thirteenth century edition of Secretum Secretorum. The tablet text[edit] C.G.

Zosimos of Panopolis Distillation equipment of Zosimos, from the 15th century Byzantine Greek manuscript Codex Parisinus 2327.[1] Zosimos of Panopolis (Greek: Ζώσιμος ὁ Πανοπολίτης; also known by the Latin name Zosimus Alchemista, i.e. "Zosimus the Alchemist") was an Egyptian[2][3][4][5] alchemist and Gnostic mystic who lived at the end of the 3rd and beginning of the 4th century AD. He was born in Panopolis, present day Akhmim, in the south of Roman Egypt, and flourished ca. 300. He wrote the oldest known books on alchemy, which he called "Cheirokmeta," using the Greek word for "things made by hand." Arabic translations of texts by Zosimos were discovered in 1995 in a copy of the book Keys of Mercy and Secrets of Wisdom by Ibn Al-Hassan Ibn Ali Al-Tughra'i', a Persian alchemist. Alchemy[edit] In general, Zosimos' understanding of alchemy reflects the influence of Hermetic and Gnostic spiritualities. Carl Jung and the Visions of Zosimos[edit] The Book of Pictures[edit] The Book of the Keys of the Work[edit] H.

A Sufi Message of Spiritual Liberty Sacred-texts Islam Pir-o-Murshid Inayat Khan London 1914 Beloved ones of God, you may belong to any race, cast, creed, or nation, still you are all impartially beloved by God. The sun, moon, and stars give light; the timely change of seasons promotes health and cheerfulness; the rain grows corn, fruits, and flowers; and the alternation of day and night provides the opportunity for work and rest. If you study your own body, you will find its mechanism to be the original model of the artificial mechanism of the world. He has fashioned and molded you after His own image, and made you Ashrá f al-Makhluá t, the highest of all beings and the pride of the universe, having given you command over all other beings of both worlds. The argument has been raised that all manifestation is due to the interaction of natural elements, working by their own force; every cause has its effect, and the effect again becomes a cause for the reaction; thus nature works unaided. Baqa is the original state of God.

'When You Shine, the Whole World Is Illuminated,' Melinda Gates Tells Johannesburg Audience Why Global Citizens Should Care For women and girls all around the world, not having agency over their own bodies presents a significant obstacle to everything from education and healthcare access to economic empowerment. The UN’s Global Goal 5 works to achieve true gender equality, as a key element to the overall mission to end extreme poverty by 2030. Join the movement by taking action here to support women and girls everywhere. Over 1,000 people gathered in Johannesburg to witness American philanthropist Melinda Gates in conversation with South African journalist Redi Tlhabi about Gates’ book, The Moment of Lift. The event, in partnership with Pan Macmillan and the Nelson Mandela Foundation, was held on Oct. 29 at the Fox Junction in Johannesburg — to explore the issues holding women back globally, and how we can all lift each other to achieve gender equality. Test Your Knowledge: Why Are Women Still Having to Risk Their Lives to Have Children? 27,462 / 50,000 actions taken