Hamlet materials. We're All Failures. Academics are wired to achieve, and their CVs are designed to showcase their every accomplishment. 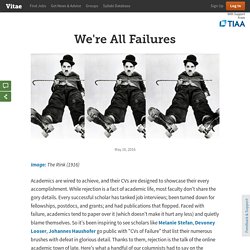 While rejection is a fact of academic life, most faculty don’t share the gory details. Every successful scholar has tanked job interviews; been turned down for fellowships, postdocs, and grants; and had publications that flopped. Faced with failure, academics tend to paper over it (which doesn't make it hurt any less) and quietly blame themselves. So it's been inspiring to see scholars like Melanie Stefan, Devoney Looser, Johannes Haushofer go public with "CVs of Failure" that list their numerous brushes with defeat in glorious detail. 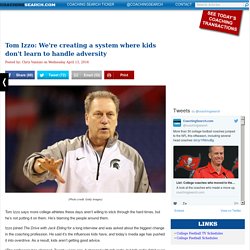 He’s blaming the people around them. Izzo joined The Drive with Jack Ebling for a long interview and was asked about the biggest change in the coaching profession. He said it’s the influences kids have, and today’s media age has pushed it into overdrive. “The profession has changed. “We’re creating a system that we’re never teaching a kid how to fight through (tough times). More than 700 college hoops players transferred last year. Again, he’s putting this swell on the people influencing kids, and it's not just transfers. College programs fall into the category of influencers, too. “I’m fortunate I’ve got as good of a president and AD as there is in the world, because there are some bad AD’s out there,” Izzo said.

“I know Mike Krzyzewski wouldn’t have been. Scholarship of Teaching and Learning. The Role Of The Introductory Sociology Course On Students' Perceptions Of Achievement Of General Education Goals, Jay R. 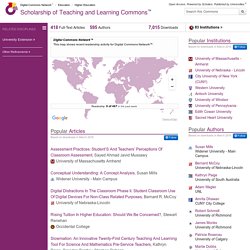 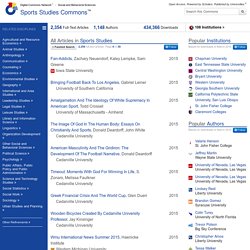 Besides viewing the massive stadiums planted everywhere as playpens inserted by extraterrestrial forces, what would change? Bringing Football Back To Los Angeles, Gabriel Leiner 2015 University of Southern California Bringing Football Back To Los Angeles, Gabriel Leiner Gabriel Leiner Identifying a suitable parcel for a large scale professional football stadium in the greater Los Angeles, CA area, which does not conflict with current uses, environmental protection codes, or airspace rights, and also has adequate transportation access and nearby populated neighborhoods. Amalgamation And The Ideology Of White Supremacy In American Sport, Todd Crosset 2015. TeachingandAgency. Factoring 21st Century Education Our Vision for Malvern Prep. Sports Studies. Fulltext. Teaching Excellence. Sam Hinkie Letter. Daniel Pink: The Surprising Truth about What Motivates Us. RSA offers up another animated video explaining what makes us tick. 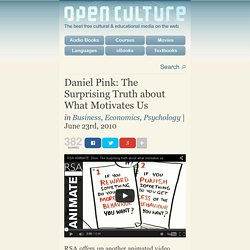 This time, they’re featuring a lecture by Daniel Pink, the bestselling author of Drive: The Surprising Truth About What Motivates Us. Revisiting research also found in Dan Ariely’s new book, The Upside of Irrationality, Pink drives home the point that traditional motivation schemes – namely, bonuses – rarely achieve their intended results. In fact, the bigger the bonus, the bigger the decline in performance. Or so studies show again and again. An Animated Carol Dweck on Why Parents Who Tell Their Kids How Smart They Are Aren't Doing Them Any Favors. After a long hiatus, the RSA (The Royal Society for the Encouragement of Arts, Manufactures and Commerce) has returned with another one of the whiteboard animated-lectures they pioneered five years ago. 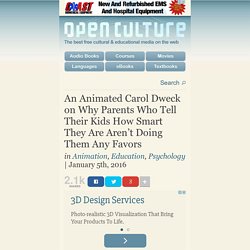 The original set of videos, you might recall, featured Slavoj Zizek on the Surprising Ethical Implications of Charitable Giving; Barbara Ehrenreich (author of Nickel and Dimed) on The Perils of Positive Psychology; Daniel Pink on The Surprising Truth About What Motivates Us, and Stanford psychologist Philip Zimbardo on The Secret Powers of Time. The animated reboot (above) brings to life the thoughts of another Stanford psychology professor, Carol S. Dweck. The author of Mindset: The New Psychology of Success (a book that appeared on Bill Gates’s Best of 2015 list), Dweck has looked closely at how our beliefs/mindsets strongly influence the paths we take in life. Related Content: How Company Culture Shapes Employee Motivation. "Identifying Characteristics of Expert Elementary School Technology Int" by Mark Campoli.

Abstract In all domains, certain individuals consistently perform better than their peers. 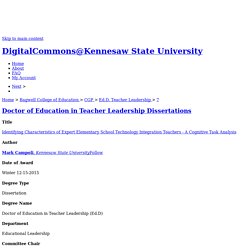 In ill-structured domains such as education, the identification of experts can be difficult. This is especially true when considering technology integration experts (TIEs). In order to be a TIE, one must be an expert in content knowledge, pedagogy, and instructional technology. Systematically identifying and studying TIEs could provide characteristics consistent with expert performance.