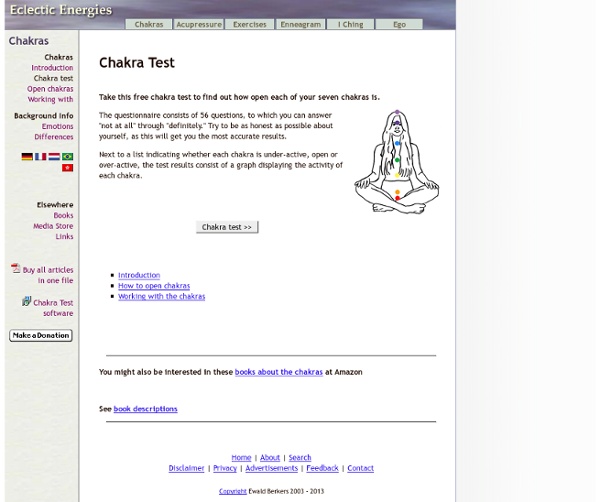 Take this free chakra test to find out how open each of your seven chakras is. The questionnaire consists of 56 questions, to which you can answer "not at all" through "definitely." Try to be as honest as possible about yourself, as this will get you the most accurate results. Next to a list indicating whether each chakra is under-active, open or over-active, the test results consist of a graph displaying the activity of each chakra.

Chakra Balanicing Third Chakra, Solar Plexus Chakra, Meditations for Healing Chakra Balancing – Meditations for Healing & Essential Oils to Use by KG Stiles, LMT, RBT, CBP, CAT “The day that you discover the sanctuary of the Divine within you is the day that your life settles down forever and that you’re ready for the magic of the true adventure.” - John O’Donohue, Irish Poet & Philosopher The Perfect Massage - Q by Equinox - StumbleUpon Learn to give a mind-blowing rubdown. (You can both thank us later). Thursday, September 8, 2011 Sacred Centers - The Chakras Portal - Pathways for Personal and Global Transformation - Chakras, Videos, Workshops and Books by Anodea Judith. The Chakra System originated within the yoga traditions of India, most specifically the Tantric period, circa 500 – 1000 AD. Therefore, yoga is an ideally designed practice to not only train your mind and body, but to access your chakras. The word yoga means yoke or union, and one can see how the chakra system represents the structural aspect of that yoke — the means through which mind and body, mortal and divine, connect.

Herbs & Herbal Uses Herbs in medicine, cooking, and magic. Find charts, planting tips, and other uses for these valuable plants below. Imagine....awakening in the morning and stepping outside to a lush and fragrant paradise....which exists to satisfy your own culinary, medicinal, and even spiritual needs..... Welcome to Herb Gardening! What is an herb? Bach Flower Remedies and the Solar Plexus Chakra ©2004 by Gaye Mack, M.A., Bach Foundation Registered Practitioner Note: The following is reprinted with permission from Igniting Soul Fire: Spiritual Dimensions of the Bach Flower Remedies, from Polair Publishing, London, UK, 2004. Located in what is known as the solar plexus of our body, the third chakra is where our conscious "fire" lies.

The Chakra System Home Table of Contents What is a Chakra? The word chakra is a Sanskrit word which is derived from the verb car ("to move"). There are several literal meanings of chakra: Chakra From an 1899 Yoga manuscript in the Braj Bhasa language. Their name derives from the Sanskrit word for "wheel" or "turning", but in the yogic context a better translation of the word is 'vortex or whirlpool'.[1][note 1] The concept of chakra features in tantric and yogic traditions of Hinduism and Buddhism. Etymology[edit] Sanskrit chakra derives from the Proto-Indo-European *kʷekʷlos; its cognates include Greek kuklos, Lithuanian kaklas, Tocharian B kokale, and English "wheel," as well as "circle" and "cycle".[2]

The Sabbats of Wicca Learn Wicca / Wicca 101 / Faerie Tradition Because witches honor nature, they have eight festivals, or Sabbats, that mark the year as it turns through its seasons. The following is basic information about these Sabbats, and includes both standard Wiccan information as well as my personal Sabbat lore and experiences, in other words, what I perceive the Sabbats to be. Samhain happens near Halloween and is when the Wiccan year begins. My altar cloth is black, because we are in the time of year that is dark. On my altar is the harvest, our "dead Lord" whose life is in the crops and "sacrificed" when the crops are killed to become our food.

The 8th Chakra and the Universal Heart First published in Kindred Spirit magazine Mar/Apr 2007 If you find yourself almost overwhelmed by the emotion of a sunset or by the sight of suffering and you feel as though you are breaking open with joy or compassion, the chances are that your 8th chakra is opening. Over five millennia ago, the Vedic spiritual tradition of ancient India recognised that the consciousness of our ego-based selves is mediated through energetic vortices, or chakras. But we have known at a deep level that our personality energy field of seven chakras is incomplete. By singing the rising cadences of its first seven notes - doh, ray, me, fa, soh la, te – unless we complete the octave by the eighth note, the higher doh, we feel something is missing.

beginners guide to zen habits. ‘Smile, breathe and go slowly.’ ~Thich Nhat Hanh By Leo Babauta While some of you have been following Zen Habits since its early days (beginning of 2007), many of you are fairly new readers. To help you through the fairly overwhelming archives, I’ve compiled a beginner’s guide. Kind of a Quick Start guide. Sound and the Chakras” - healingsounds.com Sound and the ChakrasBy Jonathan Goldman In 1980 I first began my study of the uses of sound and music as therapeutic and healing modalities. This study ultimately manifested with a Master’s Degree in Independent Study of the Uses of Sound and Music for Healing from Lesley University in Cambridge, Massachusetts. My initial investigation into the area of sound healing was the relationship between sound and the chakras.

My Page Lets101 - Online Dating Lets101 Quizzes - Fun Quiz 66% Good For You! The Spiritual Chakra 8 to 12 The Spiritual Chakra 8 to 12 back to healing index This article is from the Hermes Reality Creator Series Books and or upcoming books. Mindfulness In Plain English A PDF preview from the 20th edition - Click Here Special Offer - 20% Off the latest edition / The 20th Anniversary Edition - eBook or paperback / See Below "Mindfulness in Plain English" has been on UrbanDharma.org a while now for free download, but the edition I posted years ago was the first edition and is now rather dated. Over the last few months I have been in contact with the publisher at Wisdom Publications about M.I.P.E...