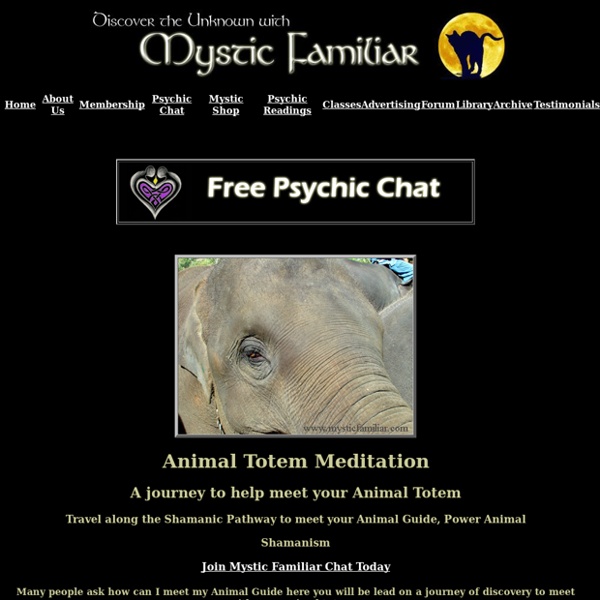 As with all meditations, its not important that you see everything I am writing... just that have fun and remember why you are here... when we do meet your animal guide... unless several come at once... you just accept the first one that comes to you.. the others are merely those you wish to have.. rather than actually have.... if several come at one time.. then those are the ones you have and accept them all Using whatever method suits you... allow yourself to relax.. Imagine as clearly as you can... that you are in a large cave... there are rugs and skins on the floor... paintings etched onto the walls with charcoal and natural made colours... shelves with various books and instruments and pots and many other items that you can look at.. add to or even take.. This is your place... a safe place... herbs and flowers are drying.. hanging from the ceiling and laid out to dry. their musky and aromatic scents fill the cave... oil burners gutter and splash their light onto the walls..

The Ancient Solfeggio Frequencies..lost in time What Are The Ancient Solfeggio Frequencies? These original sound frequencies were apparently used in Ancient Gregorian Chants, such as the great hymn to St. John the Baptist, along with others that church authorities say were lost centuries ago. The chants and their special tones were believed to impart tremendous spiritual blessings when sung in harmony during religious masses. These powerful frequencies were rediscovered by Dr.

Animal Totems S - U - Pathways What follows is an alphabetical listing of animals and their symbolism, from the letter S through the letter U. Salamander / Newt - A symbol of patience. When a salamander appears in a dream or meditation , it teaches you how to use your inspiration and dreams to make your goals happen. As a totem or power animal, the salamander aids in transformation, internal and external. untitled EDITORS NOTE: Although the TRIZ Journal does not endorse Tao as a religious belief system it does consider this particular paper to be an interesting perspective on the subject. Andre de Zanger and Judith Morgan Creativity Institute - 1664 3rd Avenue New York, NY 10128 (212) 289-8856 e-mail: creativityinstitute@juno.com The Dialectic Paradox or The Resolution of Opposites The philosophy of the "Tao" or the "Way", was set down in approximately 600 B.C. by Lao Tzu in 81 poems, entitled "The Tao Teh Ching".

Higher Self - Universal Mind - Cosmic Consciousness Who or what we perceive ourselves to be in any given moment directly impacts what we think and believe in the world, the goals and interests we pursue, and every aspect of our spiritual lives. When we are born, there is no sense of self, no sense of differentiation or separation from anything else in our awareness. As we grow older, we become identified with our bodies, personalities, families, and all of the thoughts and beliefs that make up our experience of life. As time progresses, we take on new identities: husbands and wives, mothers and fathers, managers, lawyers, office workers, computer programmers, basketball players, and the list goes on and on. As one begins to earnestly pursue a spiritual path, it's natural to question these roles and identities and try on new ones.

Muse The nine muses—Clio, Thalia, Erato, Euterpe, Polyhymnia, Calliope, Terpsichore, Urania, Melpomene—on a Roman sarcophagus (2nd century AD, from the Louvre) The Muses, (Ancient Greek: Μοῦσαι, moũsai:[1] perhaps from the o-grade of the Proto-Indo-European root *men- "think"[2]) in Greek mythology, poetry and literature, are the goddesses of the inspiration of literature, science and the arts. They were considered the source of the knowledge, related orally for centuries in the ancient culture, that was contained in poetic lyrics and myths. The Muses were both the embodiments and sponsors of performed metrical speech: mousike (hence the English term "music") was just "one of the arts of the Muses". Others included Science, Geography, Mathematics, Philosophy, and especially Art, Drama, and inspiration.

Bumble bee A bumblebee is any member of the bee genus Bombus, in the family Apidae. There are over 250 known species,[1] existing primarily in the Northern Hemisphere although they also occur in South America. They have been introduced to New Zealand and the Australian state of Tasmania. Jellyfish, Power Animal, Symbol of Acceptance and Faith <A HREF=" Widgets</A> Jellyfish, Power Animal, Symbol of Acceptance and Faith By Ina Woolcott Jellyfish's medicine includes - sensitivity to water energy (emotions), understanding of the value of floating rather than swimming through trying emotional times, proper use of softness (not being rigid), ability to become untangled from the webs of peril in life, acceptance and faith, There are many species of jellyfish, with the Man of War being the best known.

Chaos magic The chaosphere is a popular symbol of chaos magic. Many variants exist. For more, see Symbol of Chaos. Reiki Traditions[edit] Today many branches of Reiki exist, though there exist two major traditions, respectively called Traditional Japanese Reiki and Western Reiki. Traditional Japanese Reiki[edit] The term Traditional Japanese Reiki is normally used to describe the specific system that formed from Usui's original teachings[41] and the teachings that did not leave Japan. Transparent Love The following article first appeared on FuturEdition, the free, bi-monthly e-newsletter of The Arlington Institute. Our literature, both popular and sacred, is laced with categorical statements about the essence of love. Love is all there is; Love, which created me, is what I am; God is love, etc. In the things I have been reading for the past few years there is a common thread that suggests that these adages are true. We're not necessarily talking here about valentines and stuff like that -- romantic love -- but about a transcendent feeling of gratitude and appreciation for things that are bigger than just "us". If you walk outside on a crisp spring night and look at the majesty of the cosmos painted across the sky and feel a transcendent sense of awe and gratitude then you probably have tapped into this field of love that we're discussing here.

Goetia Aleister Crowley's variant of the circle and triangle, used in the evocation of the seventy-two spirits of the Ars Goetia. Goetic Theurgy, another practice described in the Lesser Key of Solomon, is similar to the book's description of Goetia, but is used to invoke aerial spirits. Etymology[edit] Γοητεία was a term for witchcraft in Hellenistic magic. Hermaphrodite In biology, a hermaphrodite is an organism that has reproductive organs normally associated with both male and female sexes.[1] Many taxonomic groups of animals (mostly invertebrates) do not have separate sexes.[2] In these groups, hermaphroditism is a normal condition, enabling a form of sexual reproduction in which both partners can act as the "female" or "male". For example, the great majority of pulmonate snails, opisthobranch snails and slugs are hermaphrodites. Hermaphroditism is also found in some fish species and to a lesser degree in other vertebrates.