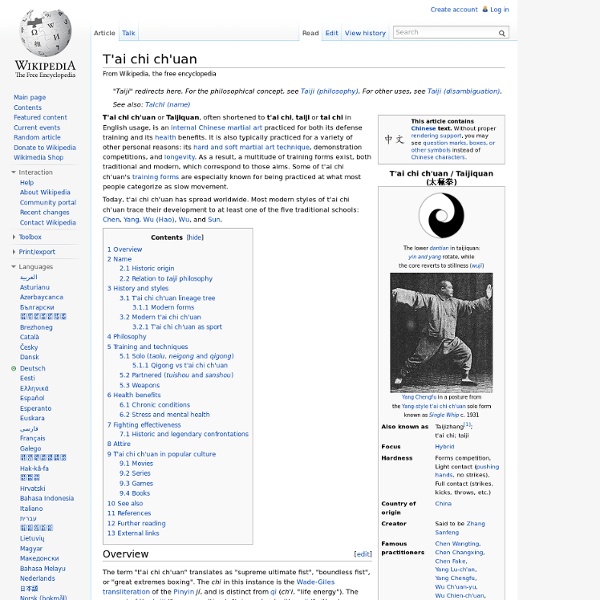 Medical research has found evidence that t'ai chi is helpful for improving balance and for general psychological health, and that it is associated with general health benefits in older people.[2] Overview[edit] . T'ai chi ch'uan theory and practice evolved in agreement with many Chinese philosophical principles, including those of Taoism and Confucianism. T'ai chi ch'uan training involves five elements, taolu (solo hand and weapons routines/forms), neigong & qigong (breathing, movement and awareness exercises and meditation), tuishou (response drills) and sanshou (self defence techniques). While t'ai chi ch'uan is typified by some for its slow movements, many t'ai chi styles (including the three most popular – Yang, Wu, and Chen) – have secondary forms with faster pace. It is purported that focusing the mind solely on the movements of the form helps to bring about a state of mental calm and clarity. Some other forms of martial arts require students to wear a uniform during practice. Note:

Tai chi: Discover the many possible health benefits Tai chi: A gentle way to fight stress Tai chi helps reduce stress and anxiety. And it also helps increase flexibility and balance. By Mayo Clinic Staff If you're looking for a way to reduce stress, consider tai chi (TIE-CHEE). What is tai chi? Tai chi is an ancient Chinese tradition that, today, is practiced as a graceful form of exercise. Tai chi, also called tai chi chuan, is a noncompetitive, self-paced system of gentle physical exercise and stretching. Tai chi has many different styles. Who can do tai chi Tai chi is low impact and puts minimal stress on muscles and joints, making it generally safe for all ages and fitness levels. You may also find tai chi appealing because it's inexpensive, requires no special equipment and can be done indoors or out, either alone or in a group. Although tai chi is generally safe, women who are pregnant or people with joint problems, back pain, fractures, severe osteoporosis or a hernia should consult their health care provider before trying tai chi.

Federazione Kung Fu Tradizionale Libertas - Scuola Chang del Maestro Ghezzi Hapkido The art adapted from Daitō-ryū Aiki-jūjutsu (大東流合気柔術) as it was taught by Choi Yong-Sool (Hangul: 최용술) when he returned to Korea after World War II, having lived in Japan for 30 years. This system was later combined with kicking and striking techniques of indigenous and contemporary arts such as taekkyeon, as well as throwing techniques and ground fighting from Japanese Judo. Its history is obscured by the historical animosity between the Korean and Japanese people following the Second World War.[1][2][3][4] Name[edit] Hapkido is rendered "합기도" in the native Korean writing system known as hangul, the script used most widely in modern Korea. The character 合 hap means "coordinated" or "joining"; 氣 ki describes internal energy, spirit, strength, or power; and 道 do means "way" or "art", yielding a literal translation of "joining-energy-way". Although aikido and hapkido are believed by many to share a common history, they remain separate and distinct from one another. Choi Yong-Sool[edit]

Get Creative! Creative-Inspiring People, Places & Things on Creativity-Portal.com Home : Get Creative! Creative-Inspiring People, Places & Things We often find our richest sources of inspiration through our experiences with other people, places, and things. Here is a listing of sections on the Creativity Portal that will open the door of creative inspiration to you! Inspiring Sections on the Creativity Portal Inspiring Creativity Success Stories Success stories contributed by artists, writers, and others who've followed their passions into the marketplace and enjoy financial rewards for their creative products and services. Be Creative! Imagination Prompt Generator Push-button story starters! Q & A: Help Along the Way A question and answer feature helping readers find answers to questions related to art, crafts, writing, and creativity. How-to Directories Hand-selected resources with free learning instruction for art, crafts, writing, and creativity. Art and Craft Articles, Lessons, and Tutorials "How to" features within the Creativity Portal. Be Creative!

Brazilian Jiu-Jitsu Brazilian jiu-jitsu (/dʒuːˈdʒɪtsuː/; Portuguese: [ˈʒiw ˈʒitsu], [ˈʒu ˈʒitsu], [dʒiˈu dʒiˈtsu]) (BJJ; Portuguese: jiu-jitsu brasileiro) is a martial art, combat sport, and a self defense system that focuses on grappling and especially ground fighting. Brazilian jiu-jitsu was formed from Kodokan Judo ground fighting (newaza) fundamentals that were taught by a number of individuals including Takeo Yano, Mitsuyo Maeda and Soshihiro Satake. Brazilian jiu-jitsu eventually came to be its own art through the experiments, practices, and adaptation of the judo knowledge of Carlos and Hélio Gracie, who then passed their knowledge on to their extended family. History[edit] Origins[edit] Geo Omori opened the first jujutsu / judo school in Brazil in 1909. [5] He would go on to teach a number of individuals including Luiz França. Gastão Gracie was a business partner of the American Circus in Belém. Name[edit] Some confusion has arisen over the employment of the term 'jiudo'. Prominence[edit] Guards[edit]

Creative Techniques This A to Z of Creativity and Innovation Techniques, provides an introduction to a range of tools and techniques for both idea generation (Creativity) and converting those ideas into reality (Innovation). Like most tools these techniques all have their good and bad points. I like to think of these creativity and innovation techniques as tools in a toolbox in much the same way as my toolbox at home for DIY. For the future, the aim is to also have sub-categories which will identify Techniques for; Problem Definition - including problem analysis, redifinition, and all aspects associated with defining the problem clearly. Special thanks to the Open University for their kind permission to use material from their publication B822. Subcategories This category has the following 5 subcategories, out of 5 total. Pages in category "Creativity Techniques" The following 192 pages are in this category, out of 192 total.

Aikido modern Japanese martial art Aikido (合気道, aikidō, Japanese pronunciation: [aikiꜜdoː], kyūjitai: 合氣道) is a modern Japanese martial art developed by Morihei Ueshiba as a synthesis of his martial studies, philosophy and religious beliefs. Ueshiba's goal was to create an art that practitioners could use to defend themselves while also protecting their attackers from injury.[1][2] Aikido is often translated as "the way of unifying (with) life energy"[3] or as "the way of harmonious spirit".[4] Mitsuteru Ueshiba at the 55th All Japan Aikido Demonstration held at the Nippon Budokan (May 2017) Aikido derives mainly from the martial art of Daitō-ryū Aiki-jūjutsu, but began to diverge from it in the late 1920s, partly due to Ueshiba's involvement with the Ōmoto-kyō religion. Ueshiba's senior students have different approaches to aikido, depending partly on when they studied with him. Etymology and basic philosophy[edit] The word "aikido" is formed of three kanji: History[edit] Initial development[edit]

How to Plot and Write a Novel: Plan Your Novel Writing with the Snowflake Method Many novelists mull over story ideas, letting them ripen and develop over time. When the story is ready to be told, instead of just sitting down and starting to type, try the Snowflake Method. This step-by-step way to write a novel begins with essential elements and becomes more detailed with each step. Essential Elements for Novel Structure Snowflakes have a structure which begins with a simple form and adds more elements to create complex patterns. 1. 2. 3. The time-saving factor for novelists here is that at this point, a writer knows whether or not the story has problems. Expand on the Beginning Novel-Writing Steps 4. 5. 6. Plot problems will arise and new insights and ideas will appear through these steps. Revise and Expand into Scenes 7. 8. 9. 10. Ingermanson stresses that the Snowflake Method is not to be hurried. Not for All Writers Ingermanson's Snowflake Method will result in a well-planned, smoothly-plotted story for writers who prefer a plan.

20 Common Grammar Mistakes That (Almost) Everyone Gets Wrong | LitReactor - StumbleUpon I’ve edited a monthly magazine for more than six years, and it’s a job that’s come with more frustration than reward. If there’s one thing I am grateful for — and it sure isn’t the pay — it’s that my work has allowed endless time to hone my craft to Louis Skolnick levels of grammar geekery. As someone who slings red ink for a living, let me tell you: grammar is an ultra-micro component in the larger picture; it lies somewhere in the final steps of the editing trail; and as such it’s an overrated quasi-irrelevancy in the creative process, perpetuated into importance primarily by bitter nerds who accumulate tweed jackets and crippling inferiority complexes. But experience has also taught me that readers, for better or worse, will approach your work with a jaundiced eye and an itch to judge. Who and Whom This one opens a big can of worms. Which and That This is one of the most common mistakes out there, and understandably so. Lay and Lie This is the crown jewel of all grammatical errors. Moot