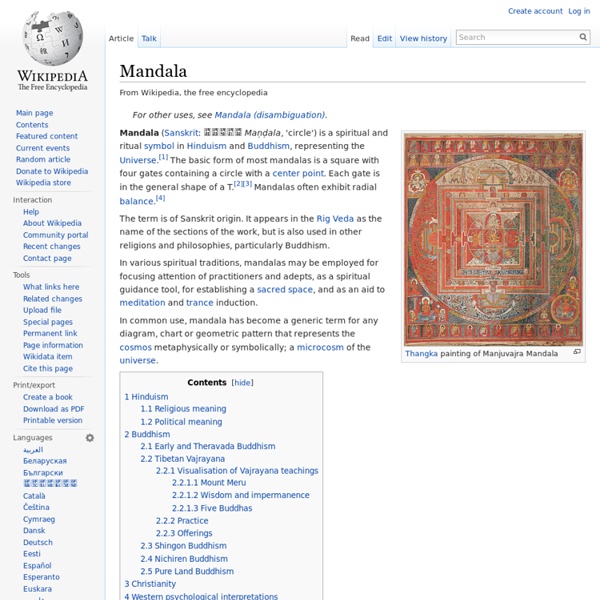 Thangka painting of Manjuvajra Mandala The term is of Sanskrit origin. It appears in the Rig Veda as the name of the sections of the work, but is also used in other religions and philosophies, particularly Buddhism. In various spiritual traditions, mandalas may be employed for focusing attention of practitioners and adepts, as a spiritual guidance tool, for establishing a sacred space, and as an aid to meditation and trance induction. In common use, mandala has become a generic term for any diagram, chart or geometric pattern that represents the cosmos metaphysically or symbolically; a microcosm of the universe. Hinduism[edit] Religious meaning[edit] A yantra is a two- or three-dimensional geometric composition used in sadhanas, puja or meditative rituals. Many situate yantras as central focus points for Hindu tantric practice. Despite its cosmic meanings a yantra is a reality lived. Political meaning[edit] Buddhism[edit] Early and Theravada Buddhism[edit] Tibetan Vajrayana[edit] Practice[edit]

Mandala of the Month Coloring Mandalas as a Meditation Technique Although you may not have heard of the word mandala before, you already know what it is. Mandala means circle in Sanskrit. Circles are a powerful symbol found in every culture. We see them in halos, prayer wheels, and other religious symbols, architecture, and nature. Mandalas are sacred circles that have been long been used to facilitate meditation in the Indian and Tibetan religions. Mandalas are entering medicine as a healing tool. Mandalas are not just something to look at or meditate on. People who color mandalas often experience a deep sense of calm and well-being. They can be particularly useful for: children - coloring mandalas can help children deal with emotions and cope with illness.

What is a mandala "Mandala art has been used throughout the world for self-expression, spiritual transformation, and personal growth. Mandala is the ancient Sanskrit word for circle and is seen by Tibetans as a diagram of the cosmos. It is used by Native Americans in healing rituals and in Christian cathedrals the labyrinth is a mandalic pattern used as a tool for meditation. An archetypal symbol of wholeness, the mandala was used as a therapeutic art tool by psychologist Carl Jung, who believed creating mandalas helped patients to make the unconscious conscious" Mandala - Journey to the Center. Bailey Cunningham In creating a mandala we open ourselves to all the possibilities that exist inside and outside of us. A mandala can take any form and there are many natural mandala forms to be found in nature. Mandalas in Nature

100 Benefits of Meditation image from All Posters There are so many advantages to meditation. When I first originally thought of this post, I indeed wanted to make it 100 benefits long (think big right!), however, I wasn’t sure I could find more than perhaps 20-25 benefits. Well, I made it happen! Meditation is as powerful as I thought it would be. Meditation is also completely FREE! If you need a point to start from, you should try guided meditation courses. Make sure you meditate, there are quite simply too many positives to just ignore it.