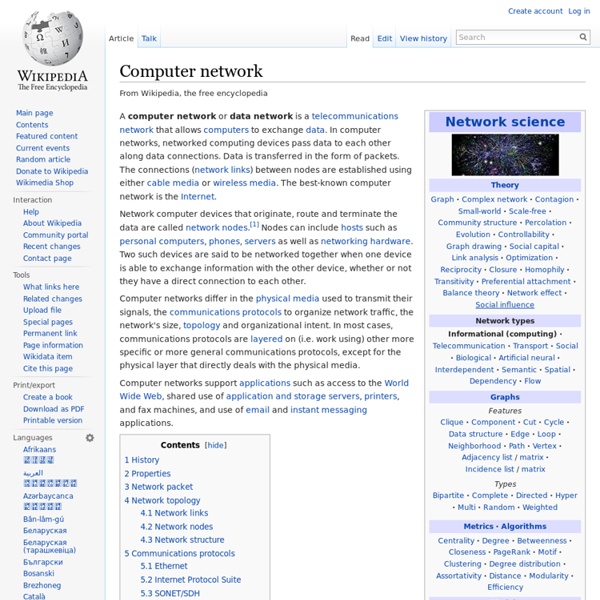 Computer networks differ in the physical media used to transmit their signals, the communications protocols to organize network traffic, the network's size, topology and organizational intent. In most cases, communications protocols are layered on (i.e. work using) other more specific or more general communications protocols, except for the physical layer that directly deals with the physical media. Computer networks support applications such as access to the World Wide Web, shared use of application and storage servers, printers, and fax machines, and use of email and instant messaging applications. History[edit] A computer network, or simply a network, is a collection of computers and other hardware components interconnected by communication channels that allow sharing of resources and information. The following is a chronology of significant computer network developments: Properties[edit] Network packet[edit] Main article: Network packet Network topology[edit] Network links[edit]

Communications protocol In telecommunications, a communications protocol is a system of digital rules for data exchange within or between computers. In computer science, when data is exchanged through a computer network, the rules system is called a network protocol. Communicating systems use well-defined formats for exchanging messages. Each message has an exact meaning intended to provoke a particular response of the receiver. Communicating systems[edit] In digital computing systems, the rules can be expressed by algorithms and data structures. Operating systems usually consist of a set of cooperating processes that manipulate shared data to communicate with each other. In contrast, because there is no common memory, communicating systems have to communicate with each other using a shared transmission medium. To implement a networking protocol, the protocol software modules are interfaced with a framework implemented on the machine's operating system. Basic requirements of protocols[edit] Protocol design[edit]

Internet U.S. Army soldiers "surfing the Internet" at Forward Operating Base Yusifiyah, Iraq The Internet is a global system of interconnected computer networks that use the standard Internet protocol suite (TCP/IP) to link several billion devices worldwide. The origins of the Internet date back to research commissioned by the United States government in the 1960s to build robust, fault-tolerant communication via computer networks.[2] This work, combined with efforts in the United Kingdom and France, led to the primary precursor network, the ARPANET, in the United States. Most traditional communications media, including telephony and television, are being reshaped or redefined by the Internet, giving birth to new services such as voice over Internet Protocol (VoIP) and Internet Protocol television (IPTV). Terminology The Internet, referring to the specific global system of interconnected IP networks, is a proper noun and written with an initial capital letter. History T3 NSFNET Backbone, c. 1992.

The TCP/IP Guide I know everyone hates ads. But please understand that I am providing premium content for free that takes hundreds of hours of time to research and write. I don't want to go to a pay-only model like some sites, but when more and more people block ads, I end up working for free. If you like The TCP/IP Guide, please consider the download version. If you want to use this site for free, I'd be grateful if you could add the site to the whitelist for Adblock. Thanks for your understanding! Sincerely, Charles Kozierok Author and Publisher, The TCP/IP Guide Telecommunications network Example of how nodes may be interconnected with links to form a telecommunications network. This example is tree-like but many networks have loops. Each terminal in the network usually has a unique address so messages or connections can be routed to the correct recipients. The collection of addresses in the network is called the address space. Examples of telecommunications networks are: Messages and protocols[edit] Messages are generated by a sending terminal, then pass through the network of links and nodes until they arrive at the destination terminal. Components[edit] All telecommunication networks are made up of five basic components that are present in each network environment regardless of type or use. Early networks were built without computers, but late in the 20th century their switching centers were computerized or the networks replaced with computer networks. Network structure[edit] Example: the TCP/IP data network[edit] The area of the network size is between LANs and WANs.

Types of Network Protocols What is a Network Protocol A protocol is a set of rules that govern the communications between computers on a network. These rules include guidelines that regulate the following characteristics of a network: access method, allowed physical topologies, types of cabling, and speed of data transfer. Types of Network Protocols The most common network protocols are: Ethernet Local Talk Token Ring FDDI ATM The followings are some commonly used network symbols to draw different kinds of network protocols. Ethernet The Ethernet protocol is by far the most widely used one. The Ethernet protocol allows for linear bus, star, or tree topologies. Fast Ethernet To allow for an increased speed of transmission, the Ethernet protocol has developed a new standard that supports 100 Mbps. Local Talk Local Talk is a network protocol that was developed by Apple Computer, Inc. for Macintosh computers. The Local Talk protocol allows for linear bus, star, or tree topologies using twisted pair cable. Token Ring

2600: The Hacker Quarterly 2600: The Hacker Quarterly is an American publication that specializes in publishing technical information on a variety of subjects including telephone switching systems, Internet protocols and services, as well as general news concerning the computer "underground" and left wing, and sometimes (but not recently), anarchist issues. Title[edit] The magazine's name comes from the phreaker discovery in the 1960s that the transmission of a 2600 hertz tone (which could be produced perfectly with a plastic toy whistle given away free with Cap'n Crunch cereal—discovered by friends of John Draper) over a long-distance trunk connection gained access to "operator mode" and allowed the user to explore aspects of the telephone system that were not otherwise accessible. The magazine was given its name by David Ruderman, who co-founded the magazine with his college friend, Eric Corley.[2] It was first published in 1984, coinciding with the book of the same name and the break-up of AT&T. Notes[edit]

Internet protocol suite The Internet protocol suite is the computer networking model and set of communications protocols used on the Internet and similar computer networks. It is commonly known as TCP/IP, because its most important protocols, the Transmission Control Protocol (TCP) and the Internet Protocol (IP), were the first networking protocols defined in this standard. Often also called the Internet model, it was originally also known as the DoD model, because the development of the networking model was funded by DARPA, an agency of the United States Department of Defense. TCP/IP provides end-to-end connectivity specifying how data should be packetized, addressed, transmitted, routed and received at the destination. The TCP/IP model and related protocol models are maintained by the Internet Engineering Task Force (IETF). History[edit] Early research[edit] Diagram of the first internetworked connection Specification[edit] Adoption[edit] Key architectural principles[edit] Abstraction layers[edit] Link layer[edit]

the free encyclopedia A computer is a program machine that receives input, stores and manipulates data, and provides output in a useful format. Computer may also refer to: How TCP/IP Works When transmitting data, the Transport layer gets data from the Application layer and divides them into several data packets. TCP (Transmission Control Protocol) is the most used protocol on the Transport layer. When receiving data, TCP protocol gets the packets sent by the Internet layer and put them in order, because packets can arrive at the destination out-of-order, and also checks if the contents of the received packet are intact and sends an acknowledge signal to the transmitter, allowing it to know that the packet arrived intact at destination. If no acknowledge signal is received (either because it didn’t arrive the destination or because TCP found out that data was corrupted), the transmitter will re-send the lost packet. While TCP re-orders packets and also uses this acknowledge system we mention, which is desirable when transmitting data, there is another protocol that works on this layer that does not have these two features.

wiki Computer is an IEEE Computer Society practitioner-oriented magazine issued to all members of the society. It contains peer-reviewed articles, regular columns and interviews on current computing-related issues. The magazine can be categorized somewhere between a trade magazine and a research journal, drawing on elements of both. Computer provides information regarding current research developments, trends, best practices, and changes in the profession. Computer covers all aspects of computer science.