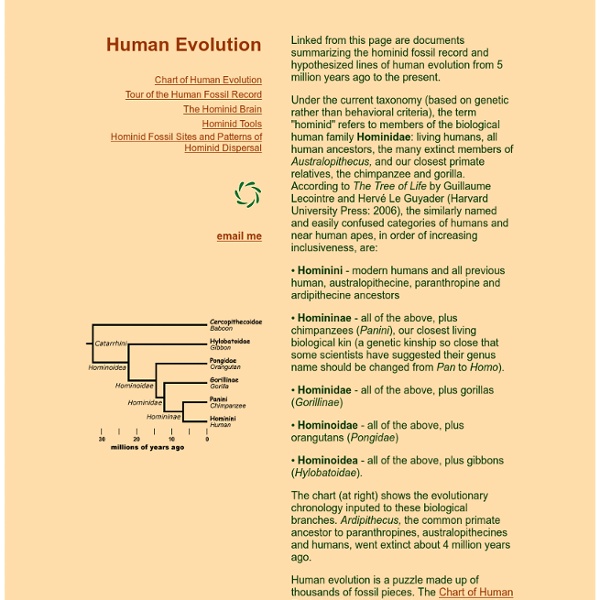 Evolutionary biologists use a cladogram, the treelike diagram of evolutionary branches or clades, to organize species into lines of evolutionary descent across time. Biologists use three types of evidence to deduce evolutionary connections: genetics, morphology, and geologic dating. (Behavior, normally a key part of evolutionary studies, can only be inferred in extinct species — for example, by examining the ecology in which the species flourished and the species adaptations for eating and locomotion.) Analyses of primate fossils and the genetic relatedness of living primates converge to the conclusion that humans and chimpanzees branched from a common ancestor about 7 million years ago. DNA recovered from several uncontaminated Neanderthalensis fossils indicated that modern humans and extinct neanderthals diverged about 400,000 years ago; but more recent studies show that they must have interbred within Europe or the Middle East since then.

Homo neanderthalensis Neanderthals (the ‘th’ pronounced as ‘t’) are our closest extinct human relative. Some defining features of their skulls include the large middle part of the face, angled cheek bones, and a huge nose for humidifying and warming cold, dry air. Their bodies were shorter and stockier than ours, another adaptation to living in cold environments. But their brains were just as large as ours and often larger - proportional to their brawnier bodies. Neanderthals made and used a diverse set of sophisticated tools, controlled fire, lived in shelters, made and wore clothing, were skilled hunters of large animals and also ate plant foods, and occasionally made symbolic or ornamental objects.

Women's March Is The Biggest Protest In US History As An Estimated 2.9 Million March Millions of Americans have taken to the streets from New York to Los Angeles and everywhere in between as the Women’s Marches on Washington is estimated to be the biggest one-day protest in US history. UConn professor Jeremy Pressman is keeping a running total of crowd estimates across the United States in a Google document. An estimated 60,000 people marched in Atlanta. 250,000 are marching in Chicago. There are estimates of 250,000 people in Boston, and 200,000 more in Denver. In New York, the estimate ranges from 200,000-500,000. City officials estimate that 500,000 people participated in the main march in Washington, DC. Early humans domesticated themselves, new genetic evidence suggests When humans started to tame dogs, cats, sheep, and cattle, they may have continued a tradition that started with a completely different animal: us. A new study—citing genetic evidence from a disorder that in some ways mirrors elements of domestication—suggests modern humans domesticated themselves after they split from their extinct relatives, Neanderthals and Denisovans, approximately 600,000 years ago. “The study is incredibly impressive,” says Richard Wrangham, a biological anthropologist at Harvard University who was not involved in the new work.

Neanderthals cared for each other and survived into old age – new research When we think of Neanderthals, we often imagine these distant ancestors of ours to be rather brutish, dying at a young age and ultimately becoming extinct. But new findings show that at least some of these ancient Neanderthals survived into old age – despite suffering from sickness or diseases. Neanderthals were hunter-gatherers, living in harsh environments, mostly colder than today. And of course they had to face different dangers to modern humans – not only during the hunt, but also because they shared ecosystems with large carnivores such as lions, leopards and hyenas. But despite this harsh life of the hunter gatherer, our research indicates that some Neanderthals lived to be fairly old and even had some of the signs of age related illnesses – such as degenerative lesions in the spine, consistent with osteoarthritis.

Women’s March Los Angeles draws estimated 750K: ‘This is what we do as Americans’ Fired up by what they call an election cycle that left them insulted and their rights threatened, hundreds of thousands of women — and the men who support them — gathered in downtown Los Angeles on Saturday as part of a nationwide act of solidarity to send a message to President Donald Trump’s administration. An estimated 750,000 people brought that message to L.A.’s packed streets in a loud but peaceful stand for equal rights and a defense of civil liberties. • Live Coverage: Women’s March Los Angeles and other protests On the half-mile route from Pershing Square to City Hall, they held up signs, some with graphic images and language directed at Trump, who took the office on Friday.

DNA solves mysteries of ancient Ireland Let’s call her ‘Maria.’ She’s a brown-eyed, brown-haired woman, with a face that would be right at home in the Mediterranean or the Middle East. And she’s Irish. The evolutionary advantage of having eyebrows Eyebrows, we all have them, but what are they actually for? While eyebrows help to prevent debris, sweat, and water from falling into the eye socket, they serve another important function too – and it’s all to do with how they move and human connection. We already know that our modern minds often reflect the ways our ancestors needed to work together to survive in the distant evolutionary past.

Photo: Stefan Ruenzel Crowds of incontestable size spelled out "Resist!!" with their bodies this morning while sitting and standing on the sands of Ocean Beach. The message, aimed at what many perceive to be an increasingly authoritarian American government, was organized on Facebook by Brad Newsham of Oakland who began creating such visual events in 2006 and commissioned a helicopter photographer for $1,000 an hour for the event.