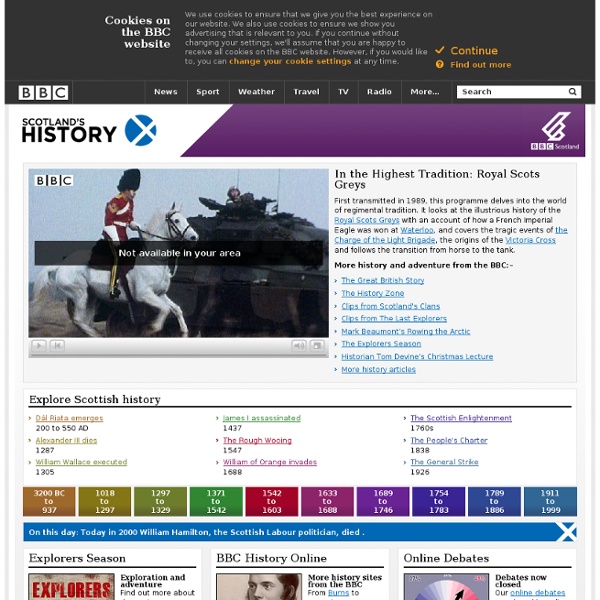 Clans and Families of Ireland and ScotlandAn Ethnography of the Gael A.D. 500 - 1750 Acknowledgments I am indebted to a number of people who have had a formative influence on this book, among them Tom Johnson, Valene Smith and Lowell Stratton at the California State University, Chico; Dan Crowley at the University of California, Davis, and Gilbert Youmans at the University of Missouri, Columbia. Thanks also go to John Foley, Ed Tyler and Sarah Feeny at the University of Missouri, Columbia, for introducing me to oral-formulaic theory, and for recommending books and articles on the subject. You can purchase this book online at Amazon.Com Visit the Authors Web Site Visit Willow Bend Books, the Publisher Copyright © 1989 C. Haz click aquí para leer algo de este libro en el Idioma Español Table of Contents Introduction Part One I. Part Two V. Bibliography

Orkney's Stone Age Temple Unicorn Of Scotland - A National Scottish Symbol What says 'magic' more loudly than choosing the mystical and powerful Unicorn of Scotland as the country's National Animal? A country's 'National Animal' should represent the best, and defining, qualities of the nation who chose it. Scots have a strong sentimental streak under that practical and reserved exterior, and Scottish culture is rich in superstitions, myths and legends. So, choosing a heraldic symbol as awe-inspiring as the unicorn makes perfect sense! Chances are you don't know too much about this fantastic creature, so let's start there. (But if you want to jump straight to how, when & why it was chosen CLICK HERE) Unicorns Abound In History & Legend The stories and legends surrounding the Unicorn go about as far back in history as the human race. These beautiful creatures were worshiped by the ancient Babylonians, and written descriptions of them appear throughout ancient history, and as early as the first century AD. Click on image to buy or browse Unicorn qualities included:

The Coming of the Unicorn: Scottish Folk Tales for Children by Duncan Williamson: Undiscovered Scotland Review The Coming of the Unicorn by Duncan Williamson is a wonderful collection of Scottish folk and fairy tales for children. The stories are beautifully told and perfectly written to be read aloud to the small child or children in your life. What is especially nice is that although these are stories with many familiar "folk tale" elements, they also have a freshness and originality which really keeps you turning the page. The book opens with the story of the "Fox and the Two Cat Fishers", a story with a clear message, and this starts a theme. What really brings the stories to life is an understanding of their background and purpose, set out in the introduction.

Burgess Shale The Burgess Shale Formation, located in the Canadian Rockies of British Columbia, is one of the world's most celebrated fossil fields.[2] It is famous for the exceptional preservation of the soft parts of its fossils. At 505 million years (Middle Cambrian) old,[3] it is one of the earliest fossil beds containing soft-part imprints. The rock unit is a black shale and crops out at a number of localities near the town of Field in Yoho National Park and the Kicking Horse Pass. Another outcrop is in Kootenay National Park 42 km to the south. History and significance[edit] The Burgess Shale was discovered by palaeontologist Charles Walcott on 30 August 1909,[4] towards the end of the season's fieldwork.[5] He returned in 1910 with his sons, daughter, and wife, establishing a quarry on the flanks of Fossil Ridge. With Parks Canada and UNESCO recognising the significance of the Burgess Shale, collecting fossils became politically more difficult from the mid-1970s. Geological setting[edit]

Ancient Egypt - Ancient History Under Ahmose I, the first king of the 18th dynasty, Egypt was once again reunited. During the 18th dynasty, Egypt restored its control over Nubia and began military campaigns in Palestine, clashing with other powers in the area such as the Mitannians and the Hittites. The country went on to establish the world’s first great empire, stretching from Nubia to the Euphrates River in Asia. The controversial Amenhotep IV (c. 1379-1362), of the late 18th dynasty, undertook a religious revolution, disbanding the priesthoods dedicated to Amon-Re (a combination of the local Theban god Amon and the sun god Re) and forcing the exclusive worship of another sun-god, Aton. All of the New Kingdom rulers (with the exception of Akhenaton) were laid to rest in deep, rock-cut tombs (not pyramids) in the Valley of the Kings, a burial site on the west bank of the Nile opposite Thebes.

Solved! How Ancient Egyptians Moved Massive Pyramid Stones Researchers have traced how cells in our retina track objects that move across our field of vision, thanks in part to thousands of video gamers. The findings, published online Sunday by the journal Nature, validate a concept that explains how some nerve cells are stimulated only by motion in a specific direction and not in other directions. They also validate the use of video games, crowdsourcing and the other tools of citizen science for making rigorous scientific discoveries. "You no longer have to have a Ph.D. in neuroscience," said Amy Robinson, creative director for the EyeWire neuro-gaming venture, which contributed to the study. "You could be a high-school student, or a sculptor, a dental assistant or retiree. All you have to have is now is an Internet connection and an interest in gaming." More than 120,000 EyeWire gamers ("EyeWirers") from more than 100 countries have signed up to play online video games in which they trace 3-D representations of neural wiring. Mapping the retina