Evidence varies when Neanderthals died out 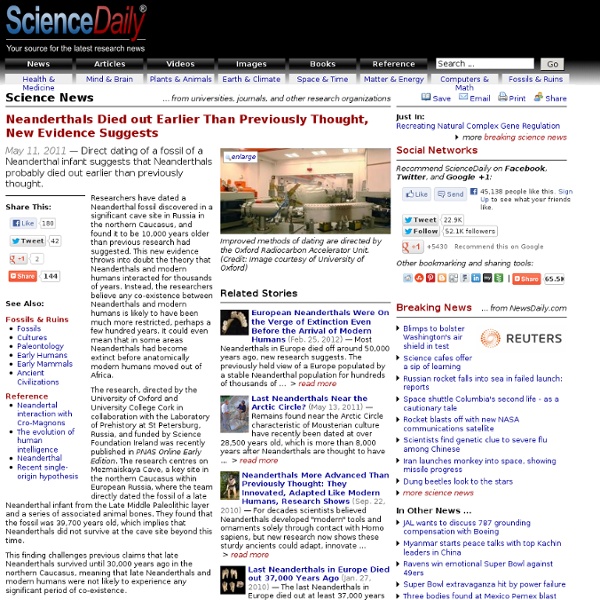 Direct dating of a fossil of a Neanderthal infant suggests that Neanderthals probably died out earlier than previously thought. Researchers have dated a Neanderthal fossil discovered in a significant cave site in Russia in the northern Caucasus, and found it to be 10,000 years older than previous research had suggested. This new evidence throws into doubt the theory that Neanderthals and modern humans interacted for thousands of years. Instead, the researchers believe any co-existence between Neanderthals and modern humans is likely to have been much more restricted, perhaps a few hundred years. It could even mean that in some areas Neanderthals had become extinct before anatomically modern humans moved out of Africa. The research, directed by the University of Oxford and University College Cork in collaboration with the Laboratory of Prehistory at St Petersburg, Russia, and funded by Science Foundation Ireland was recently published in PNAS Online Early Edition.

Neanderthals were distilling tar 200 thousand years ago in Europe Despite many recent discoveries that show Neanderthals were technologically and socially sophisticated, there's still a popular idea that these heavy-browed, pale-skinned early humans were mentally inferior to modern Homo sapiens. Now we have even more corroboration that they were pretty sharp. A fascinating new study reveals that Neanderthals were distilling tar for tool-making 200 thousand years ago—long before evidence of tar-making among Homo sapiens.

Bunnies implicated in the demise of Neanderthals - 27 February 2013 BLAME it on the bunnies. The debate over what Neanderthals ate, and how it may have led to their demise, has turned to rabbits. Which, it is now claimed, they did not feast on. Signs that our extinct cousins hunted dolphins and seals were presented in 2008 as evidence of their sophistication. But, experts claimed in 2009, they weren't clever enough to catch fish or birds – which could have given our ancestors an edge. As much as 2.6% of your DNA is from Neanderthals. This is what its doing Modern humans are a little more Neanderthal than we thought. A highly detailed genetic analysis of a Neanderthal woman who lived about 52,000 years ago suggests that our extinct evolutionary cousins still influence our risk of having a heart attack, developing an eating disorder and suffering from schizophrenia. Altogether, scientists now estimate that somewhere between 1.8% and 2.6% of the DNA in most people alive today was inherited from Neanderthals, according to a report published Thursday in the journal Science. The genetic contribution of these archaic hunter-gatherers is highest in people of East Asian descent, accounting for between 2.3% and 2.6% of their DNA. Neanderthals lived primarily in Europe and western Asia for hundreds of thousands of years before they mysteriously disappeared around 40,000 years ago. However, in humans of western Eurasian heritage, the amount of Neanderthal DNA is a more modest 1.8% to 2.4%, researchers found.

European Neanderthals were on the verge of extinction even before the arrival of modern humans New findings from an international team of researchers show that most Neanderthals in Europe died off around 50,000 years ago. The previously held view of a Europe populated by a stable Neanderthal population for hundreds of thousands of years up until modern humans arrived must therefore be revised. This new perspective on the Neanderthals comes from a study of ancient DNA published February 25 in Molecular Biology and Evolution. Humans didn’t outsmart the Neanderthals. We just outlasted them. A reconstructed Neanderthal skeleton, right, and a modern human skeleton, left, on display at the Museum of Natural History in New York. (Frank Franklin II/Associated Press) By the standards of the Paleolithic age, members of Homo neanderthalensis were the height of sophistication.

Did Volcanoes Wipe Out Neanderthals? Neanderthals may have gone out with a bang. At least three volcanic eruptions 40,000 years ago devastated Neanderthals' homelands. Geographic good luck may have allowed Homo sapiens to move into Neandertals' former haunts. Neanderthals were artistic like modern humans, study indicates Scientists have found the first major evidence that Neanderthals, rather than modern humans, created the world's oldest known cave paintings - suggesting they may have had an artistic sense similar to our own. A new study led by the University of Southampton and the Max Planck Institute for Evolutionary Anthropology shows that paintings in three caves in Spain were created more than 64,000 years ago - 20,000 years before modern humans arrived in Europe. This means that the Palaeolithic (Ice Age) cave art - including pictures of animals, dots and geometric signs - must have been made by Neanderthals, a 'sister' species to Homo sapiens, and Europe's sole human inhabitants at the time. It also indicates that they thought symbolically, like modern humans. Published today in the journal Science, the study reveals how an international team of scientists used a state-of-the-art technique called uranium-thorium dating to fix the age of the paintings as more than 64,000 years.

How Should The Business Website Look Like? Website is an area where you can hoard ideas and information personally, but when that particular site is planned to host it must be designed in professional approach. One best website must hold clear contents, well defined products and services and how supportive you are to customers. Before naming and hosting your website, make sure that the website tells about you and your service in effective way. May be every individual in this world will have different ideas on their sites and some may not. Homo neanderthalensis Neanderthals (the ‘th’ pronounced as ‘t’) are our closest extinct human relative. Some defining features of their skulls include the large middle part of the face, angled cheek bones, and a huge nose for humidifying and warming cold, dry air. Their bodies were shorter and stockier than ours, another adaptation to living in cold environments.

‘Army Of Half-Cloned Mice' Created In China From Artificial Sperm Researchers at the Shanghai Institute for Biological Sciences have successfully created artificial mouse sperm that are easily replicable and, when implanted in an egg, more reliably grow into healthy mice. The resulting 125 pups, 39 of which weren't born healthy, could make up a small army of mice to be used for research into genetic diseases. In 2012, the same researchers created artificial sperm for the first time, which they were able to implant in a natural egg. It only sort-of worked—just two percent of the embryos developed into healthy mice. Researchers make artificial sperm by knocking out the nucleus of an egg and replacing it with one set of DNA from the father of the offspring-to-be.