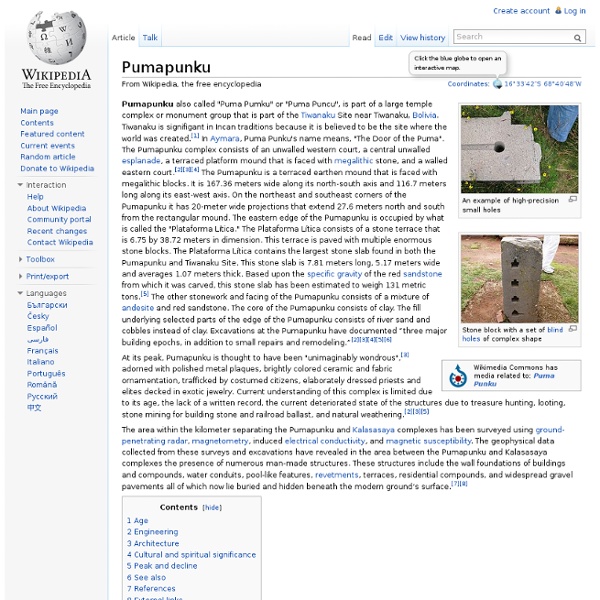 Coordinates: An example of high-precision small holes Stone blocks at Pumapunku Pumapunku or Puma Punku (Aymara and Quechua puma cougar, puma, punku door, hispanicized Puma Puncu) is part of a large temple complex or monument group that is part of the Tiwanaku Site near Tiwanaku, Bolivia. Tiwanaku is significant in Inca traditions because it is believed to be the site where the world was created.[1] In Aymara, Puma Punku's name means "The Door of the Puma". The Pumapunku is a terraced earthen mound that is faced with blocks. The other stonework and facing of the Pumapunku consists of a mixture of andesite and red sandstone. At its peak, Pumapunku is thought to have been "unimaginably wondrous",[3] adorned with polished metal plaques, brightly colored ceramic and fabric ornamentation, trafficked by costumed citizens, elaborately dressed priests and elites decked in exotic jewelry. Age[edit] Engineering[edit] Detail of stone with precisely cut straight line and tooled holes within the line

Scallywag & Vagabond » Savage Predator » Mysterious Block of Wood Discovered on Iceberg at Magnetic South Pole Begin wildly conspiring: ‘s , who is traveling to on the to study glacial ice, has spotted this rectangular block of wood perched prominently atop an iceberg within the no compass region around the magnetic south pole. According to Barlow, And, some say, startlingly similar to the monolith in .. Naturally, theories from serious to sarcastic have been bursting through the blogosphere. Said one commenter, And another, claiming to be Adolf Hitler, Which was only a matter of time, because we all know it’s notoriously difficult not to slip into a German drawl anytime underground Antarctic bases are involved. But whether it’s Elvis’s hideaway home or a piece of timber deposited by migrating swallows, one theme in these theories is common to nearly them all. Your move, .

Real-life Da Vinci Code: Tiny numbers and letters discovered on the Mona Lisa By Nick Pisa and Luke Salkeld Created: 17:25 GMT, 12 December 2010 Intrigue is usually focused on her enigmatic smile. But the Mona Lisa was at the centre of a new mystery yesterday after art detectives took a fresh look at the masterpiece – and noticed something in her eyes. Hidden in the dark paint of her pupils are tiny letters and numbers, placed there by the artist Leonardo da Vinci and revealed only now thanks to high-­magnification techniques. Under the microscope: Historians in Italy have discovered that by magnifying the eyes of the Mona Lisa painting tiny numbers and letters can be seen Hidden symbols: This eye is thought to contain L and V, the artist's initials Experts say the barely distinguishable letters and numbers represent something of a real-life Da Vinci code. The revelation could have come straight from the pages of Dan Brown’s best-seller The Da Vinci Code, in which the Mona Lisa is said to contain hidden clues about the Holy Grail.

Sinister Sites: The Georgia Guidestones The Georgia Guidestones is a mysterious monument on which are carved ten “commandments” for a “New Age of Reason”. The first commandment? Maintaining the world population under 500 million people. The Georgia Guidestones is an enigmatic granite monument situated in Elbert County, Georgia. The Monument Quietly standing in Elberton county, the Guidestones will probably gain in relevancy in the next years Made of Pyramid blue granite, the Georgia Guidestones are meant to withstand the test of time and to communicate knowledge on several levels: philosophically, politically, astronomically, etc. The four major stones are arranged in a giant “paddlewheel” configuration which are oriented to the limits of the migration of the sun during the course of the year and also show the extreme positions of the rising and setting of the sun in its 18.6 year cycle. Source: Wired At the base of the Guidestones lies an explanatory tablet listing some of the details of the structure. The 10 Commandements 1.

World-Mysteries.com Arabian desert surrenders Queen of Sheba's secrets [Arabian desert surrenders Queen of Sheba's secrets] ... [Who was the Queen of Sheba?] ... [Modern science helps uncover ancient treasures] ... September 12, 2000 Arabian desert surrenders Queen of Sheba's secretsArchaeologists unearth 3,000-year-old temple in Yemen, opening a new door to southern Arabia's ancient civilizations Researchers from the University of Calgary are participating in an American Foundation for the Study of Man project to unlock the secrets of a 3,000-year-old temple in Yemen. The Mahram Bilqis - pronounced Mah-ram Bill-kees - (or Temple of the Moon God) lies buried under the sands of the southern Arabian desert in northern Yemen and is believed to have been used throughout the reign of the legendary Queen of Sheba. "The sanctuary is packed with artifacts, pottery, artwork and inscriptions, opening a new door to the ancient civilizations of southern Arabia," says Glanzman. The excavation of Mahram Bilqis was initiated in 1951 by the late American archaeologist Dr.

Yemen As It Is... Why Yemen is the next war front. By Gary Vey for viewzone (posted January 5, 2010) As an editor here at viewzone I get to write and publish lots of interesting stories. Some authors write stories to promote a book or CD. Others want to be credited with a discovery of something, usually in the field of science or history. Occasionally though, a story must be told because it is ripe -- its time has come -- and that is why I have decided to write this true story about Yemen. In the past couple of days, Yemen has been in the news. Soon you will hear many things about Yemen. Yemen is the poorest country in the Arabian peninsula. But I have. In 2001 I was the guest of the Yemeni government because I had accidentally made a discovery that I had no right to make. Accidental discovery No, I'm not an archaeologist or even an historian. I went to the site and photographed the petroglyphs. About a year passed. Dr. The next e-mail I received contained more photographs of the same alphabet. Comments: