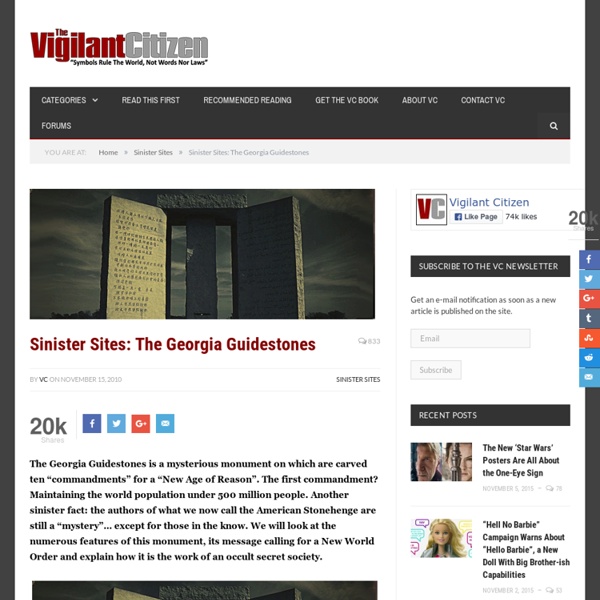 The Georgia Guidestones is a mysterious monument on which are carved ten “commandments” for a “New Age of Reason”. The first commandment? Maintaining the world population under 500 million people. Another sinister fact: the authors of what we now call the American Stonehenge are still a “mystery”… except for those in the know. We will look at the numerous features of this monument, its message calling for a New World Order and explain how it is the work of an occult secret society. The Georgia Guidestones is an enigmatic granite monument situated in Elbert County, Georgia. The Monument Quietly standing in Elberton county, the Guidestones will probably gain in relevancy in the next years Made of Pyramid blue granite, the Georgia Guidestones are meant to withstand the test of time and to communicate knowledge on several levels: philosophically, politically, astronomically, etc. Source: Wired Astronomical features are of a great importance in the design of the Guidestones. 1. R.C. Related:  ARCHEOLOGY DIRECTORY • Eugenics

The Georgia Guidestones - Another Gateway Into The New World Order/New Civilisation Enclosure For The Sheeple by Arthur Cristian "LET THESE BE GUIDESTONES TO AN AGE OF REASON" - TheGeorgiaGuideStones.com "A letter in stone to the editor of history, unsigned, and an inspiration to mischief" The message of the Georgia Guide Stones 1. Maintain humanity under 500,000,000 in perpetual balance with nature. 2. 3. 4. 5. 6. 7. 8. 9. 10. Located on Georgia Highway 77 between Hartwell and Elberton, these giant granite stones are often referred to as "America's Stonehenge", because of their similarity to the famous England landmark. Video: A Journey Through The Guide Stones - 2006 A Brief Look at the Georgia Guide Stones The Guidestones have been referred to by some as a monument to God, others refer to it as a monument to Satan, saying that the 10 "Guides" are actually the "10 Commandments of the Anti-Christ". The site has been host to a myriad of activities: many "alternative" religions (such as witchcraft, druidism, etc) have used the site for ceremonies. The Time Capsule at the Georgia Guide Stones Gives No Date Why? Hang on!

World-Mysteries.com Yemen As It Is... Why Yemen is the next war front. By Gary Vey for viewzone (posted January 5, 2010) As an editor here at viewzone I get to write and publish lots of interesting stories. Some authors write stories to promote a book or CD. In the past couple of days, Yemen has been in the news. Soon you will hear many things about Yemen. Yemen is the poorest country in the Arabian peninsula. But I have. In 2001 I was the guest of the Yemeni government because I had accidentally made a discovery that I had no right to make. Accidental discovery No, I'm not an archaeologist or even an historian. The petroglyphs above were originally painted with aluminum powder before being photographed and have been enhanced here in white with photoshop to make them stand out from the dark rock face. I went to the site and photographed the petroglyphs. The older petroglyphs seemed to have recurring symbols, like an alphabet, and I spent about a week photographing them. About a year passed. Dr. I'm not a historian. Comments:

infobomber | information explosions The Official Website Of Joshua P Warren Paranormal Investigator Broadcaster and Author Amazing Metropolis Discovered in Africa is 200,000 years old! By Dan Eden for viewzone. They have always been there. People noticed them before. Something amazing has been discovered in an area of South Africa, about 150 miles inland, west of the port of Maputo. The image [top of page] is a close-up view of just a few hundred meters of the landscape taken from google-earth. This changed when researcher and author, Michael Tellinger, teamed up with Johan Heine, a local fireman and pilot who had been looking at these ruins from his years flying over the region. "When Johan first introduced me to the ancient stone ruins of southern Africa, I had no idea of the incredible discoveries we would make in the year or two that followed. Where it was found The area is significant for one striking thing -- gold. Did gold play some role in the dense population that once lived here? The individual ruins [see below] mostly consist of stone circles. How the Site was dated NEXT: The Dating of the Site Viewzone || Comments?

Image Archive on the American Eugenics Movement Cold Spring Harbor Laboratory's The Eugenics Archive utilizes Flash for enhanced search features, cross referencing, and interactive images created with Zoomifyer. Get the Flash plugin at Adobe.com. The Eugenics Archive will open in a new window. I prefer the original, HTML-only Eugenics Archive site, take me there. Eugenics Archive Blog Sterilization Laws Based on a task force recommendation, the North Carolina legislature is considering paying $50,000 to living individuals sterilized by the state against their will or without their knowledge. Examine the Chronicle of how society dealt with mental illness and other "dysgenic" traits in the final section of our website DNA Interactive.