14 Stories That Prove Animals Have Souls 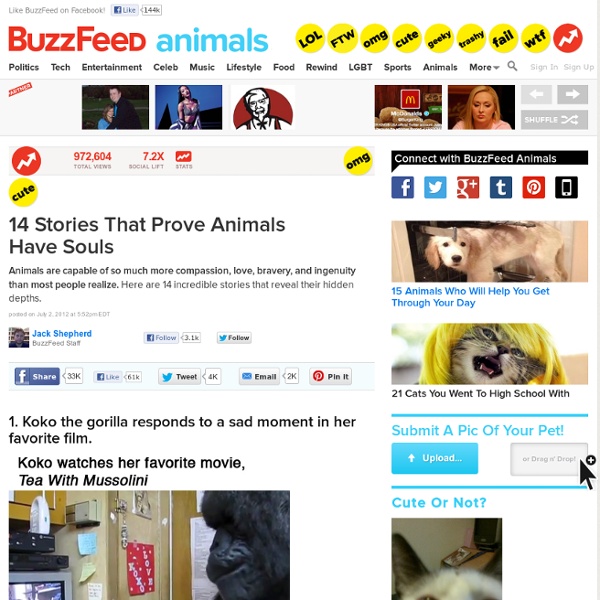 1. Koko the gorilla responds to a sad moment in her favorite film. 2. The parrot with the moving last words. Alex the African gray parrot was able to count and identify colors, and he had a beautiful relationship with his person, Irene Pepperberg. When Alex died in 2007, his last words to her were “You be good. 3. According to scientist Krista McLennan, “When heifers have their preferred partner with them, their stress levels in terms of their heart rates are reduced compared with if they were with a random individual.” 4. Guide dogs Salty and Roselle were awarded a joint Dickin Medal “For remaining loyally at the side of their blind owners, courageously leading them down more than 70 floors of the World Trade Center and to a place of safety following the terrorist attack on New York on 11 September 2001.” 5. In 2007, five children were playing with George when they were attacked by pit bulls. 6. “I began to choke and sank even lower and I thought that was it for me – I was dead. 7. 8. 9.

25 Beautifully Illustrated Thought-Provoking Questions 405 Flares Facebook 137 Twitter 5 Google+ 194 StumbleUpon 1 Pin It Share 68 68 405 Flares × A question that makes you think is worth asking… At the cusp of a new day, week, month, or year, most of us take a little time to reflect on our lives by looking back over the past and ahead into the future. We ponder the successes, failures and standout events that are slowly scripting our life’s story. This process of self reflection helps us maintain a conscious awareness of where we’ve been and where we intend to go.

Search #f2f2ed #e8e4dc #d4c9bd #8c4d4e #db8383 Created and Estranged Alphabets of Visionary, Creative and Boring Things JF Ptak Science Books Quick Post So. As it turns out there are at least 23 alphabets (of sorts) created or estranged on this blog (compared to the six that show up in my archive search under "alphabet"). A few more and we might have an alphabetical post of alphabet posts. Here they are, the ABCorama: An Alphabet of Australian Convict Mugshots, 1900-1920, here. Rare and Precious Moments of Animal Life How interesting can animal life be is something which we can only guess. By looking these amazing photographs it seems that they have very funny and precious moments. Would you like to be monkey, or elephant, or maybe cat sometimes?

No More Steubenvilles: How To Raise Boys to be Kind Men When Max was just a few months old, I sat cross-legged on the floor with him in a circle of other mothers. The facilitator for our “Mommy and Me” playgroup would throw a question out to the group, and we would each volley back an answer. “What quality do you want to instill in your child? Seeing in the Dark & SEEDMAGAZINE.COM Credit: cliff1066tm. Patient TN was, by his own account, completely blind. Two consecutive strokes had destroyed the visual cortex of his brain, and consequently, his ability to see.

The College Dorm You Wish You Lived In If you’re lucky, maybe you went to a college on a campus with fancy, new college dorms. If you’re not, you may have lived in a tiny box-like room in an uninspired building. Regardless of your dorm living situation (or lack thereof), it’s hard not to be envious of the students who get to live in Copenhagen’s Tietgen Student Hall (Tietgenkollegiet), a 288,000-square-foot, seven-story building designed as a communal space for residence. Among the building’s features: All rooms face outwards, thanks to the building’s circular space (a symbol of its equality and communal nature). That means everyone gets ample natural light.

Ptak Science Books JF Ptak Science Books Post 2726 This is a short bit about incompleteness, the discharge of connection and of knowing. And no, I'm not talking about The Incompleteness Theorem, the big revolutionary one...just a little incompletelness, the small “i” incompleteness, that sometimes doesn't even make it to the first “e”. It is the sort of frustrating incompleteness that holds you hard when you think you know something, but you really don't—and then you wonder if you knew it at all, once the connections are made and the analysis done, when the answer is more surprising and insightful than you thought you knew. A big Incompleteness set in the two days ago, thumbing through a volume Jean Le Clerc's mini-massive journal, Bibliotheque Universelle et Historique, which was printed in Amsterdam in the late 1680's and early 1690's, and in its 25 volumes or so covers only about five years in the history of ideas (covering 1688-1792).

Stray dog becomes instant mom When a group of dog rescuers arrived at the market to show the dogs available for adoption, somebody had left 12 puppies on the street – 8 of them were approximately 5 weeks old. In shock, the rescuers didn’t know what to do. The group had recently canceled several adoption days at the market because of bad weather, so they were over their capacity with puppies still needing to be adopted out. Also, the abandoned puppies were so small that they needed to be fed every two hours, including at night. That’s when a spayed stray dog approached, lay down beside the shoe box where the puppies were sleeping, and began caring for them. She wouldn’t let anyone get near the babies.