50 Adorable Animals To Melt Your Heart 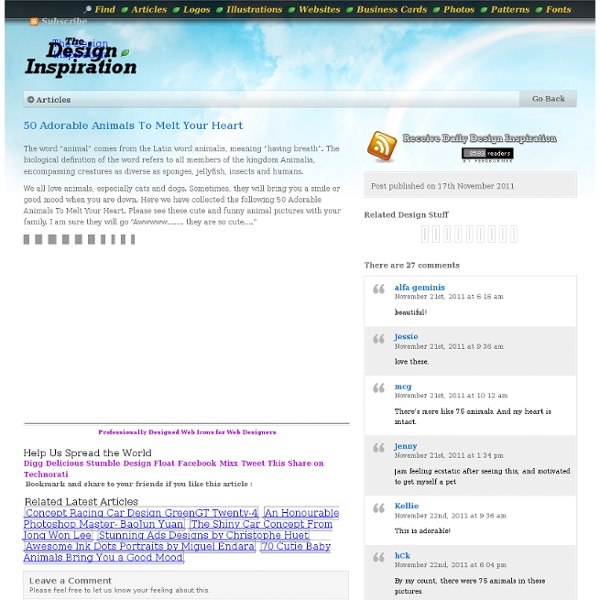 From prokaryotes to eukaryotes From prokaryotes to eukaryotes The complex eukaryotic cell ushered in a whole new era for life on Earth, because these cells evolved into multicellular organisms. But how did the eukaryotic cell itself evolve? How did a humble bacterium make this evolutionary leap from a simple prokaryotic cell to a more complex eukaryotic cell? Silhouette Pictures: 30 Silhouette Photography Examples Posted on Aug 07, 2009 | Comments 50 251.2K Flares251.2K Flares × A silhouette is defined as an outline that appears dark against a light background. More specifically, it is where your subject is seen as a black shape without detail against a brighter background.

Incredible Wildlife Photography Wildlife — By Stephanie on January 11, 2010 at 10:58 am Canada goose protects her young Ever have one of those moments when you think to yourself, “Boy, I wish I had my camera?!” Well, you can enjoy the good fortune of the photographers who were not empty handed when they shot these amazing animal pictures. These high-speed images are treasures that tell stories we rarely get to see – let alone capture – in stunning detail.

Meet the incredible smiling seal! How an intrepid photographer crawled across the ice on his stomach to get these amazing images By Daily Mail Reporter Updated: 07:20 GMT, 13 January 2012 Why wouldn't he be smiling? This Canadian Harp Seal gets to play all day in the snow and bask in the sunshine. Search #d9e8c3 #ced181 #7c8f50 Life Life is a characteristic distinguishing objects having signaling and self-sustaining processes from those that do not,[1][2] either because such functions have ceased (death), or because they lack such functions and are classified as inanimate.[3][4] Biology is science concerned with the study of life. Though life is confirmed only on the Earth, many think that extraterrestrial life is not only plausible, but probable or inevitable.[15][16] Other planets and moons in the Solar System have been examined for evidence of having once supported simple life, and projects such as SETI have attempted to detect radio transmissions from possible alien civilizations. According to the panspermia hypothesis, microscopic life exists throughout the Universe, and is distributed by meteoroids, asteroids and planetoids.[17] Early theories Materialism

Dancers out and about [25 pictures] Photographer Jordan Matter created his series “Dancers Among Us” as a reminder to “relish moments large and small, recognize the beauty around you, and be alive!” Here are a bunch of the pics, but there are even more at his website and in his book. 19 Amazing Video Game Cakes - Mental Floss Serious gamers know just how time-consuming gaming is, often making it difficult to do anything besides working (only to buy more games) and playing the games themselves. Even so, gamers usually do still manage to have lives outside of the console; these cakes are some of the amazing creations born as a result. Consoles While most people dedicate their gaming obsessions to the specific games they play, others adore entire consoles. For those who worship at the altar of the original NES, Debbie Does Cakes has made a simply amazing cake complete with some of the system’s most classic characters.