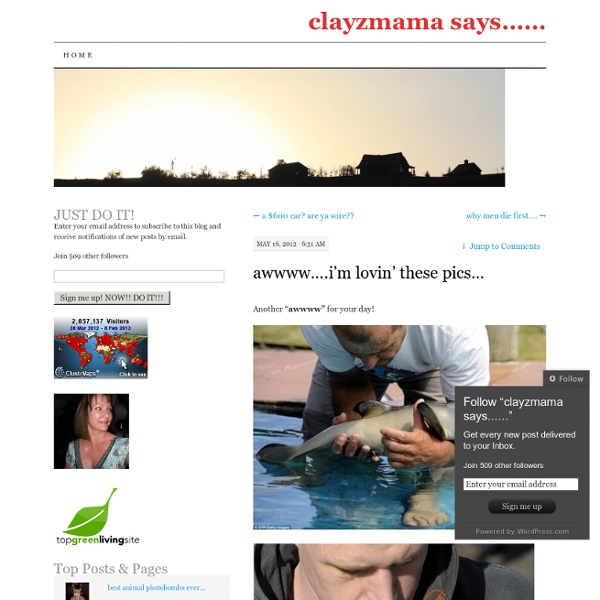 Another “awwww” for your day! A turtle the size of a grape! Shy walrus.. A cat with a permanent Top Hat!! Embarrassed Pug…. in slippers! Baby hedgehog in bubbles… Proud mama otter showing off her baby! Bath time for baby hippo! Like this: Like Loading...

Top 100 Photos of the Year 2012 *Please note the photographs themselves were not necessarily taken in 2012, they just happened to be featured as a POTD this year. The pictures are also listed in reverse chronological order. There is no ranking amongst the photos Enjoy! Photograph by Robert Elves on Flickr Photograph by Stephen Wilkes | Prints available

Hug Chair by Ilian Milinov & Yanko Design A Chair for Clingy Lovers If you’ve ever had someone sit in your lap, you know that 15 minutes is about the max your legs can handle. It’s really not fair. The Hug chair brings simple design and human gesture together for that extra time you want to sit with your significant other. When you’re away from your special someone the extra seat doubles as a convenient space, perfect for catching up on video chat. Designer: Ilian Milinov

In Focus - National Geographic Photo Contest 2011 National Geographic is currently holding its annual photo contest, with the deadline for submissions coming up on November 30. For the past nine weeks, the society has been gathering and presenting galleries of submissions, encouraging readers to vote for them as well. National Geographic was kind enough to let me choose among its entries from 2011 for display here on In Focus. Gathered below are 45 images from the three categories of People, Places, and Nature, with captions written by the individual photographers. [45 photos] Use j/k keys or ←/→ to navigate Choose:

(Images) 56 Inspirational Picture Quotes That Will Motivate Your Mind Now and then when we need a little Inspiration we often reach for a daily quote or motivational video. So I decided to share 56 of my favorite picture quotes, share them with your friends or plaster them on your wall and desktop for your daily Inspiration. Future Computer by Jakub Záhoř & Yanko Design Future Touch Tech This concept computer-of-the-future by designer Jakub Záhoř allows the user to operate the device anywhere they can find a glass surface. The user simply attaches the central unit to any glass surface like a window or coffee table, switches on the power, and watches their system light up before their eyes. The display appears as an interactive hologram on the glass that the user merely has to touch to operate. It also makes for an easy, take-anywhere way to project photos and presentations or stream movies. Windex not included.

Shake It Off And Take A Step Up One day a farmer’s donkey fell down into a well. The animal cried piteously for hours as the farmer tried to figure out what to do. Finally, he decided the animal was old, and the well needed to be covered up anyway; it just wasn’t worth it to retrieve the donkey. He invited all his neighbors to come over and help him. 11 Pencil Vs. Camera Images 986 653Share10.7K Born in Abidjan, Ivory Coast and now living in Belgium, Ben Heine is an amazing artist who overlaps hand-drawn works of art with photos to create stunning images. I selected eleven of his Pencil Vs. Oh They're So Surprised! Oh They’re So Surprised! Posted by SHMO on November 5, 2012 · 124 Comments What if the animal kingdom could understand the dramatic presidential election? What if they could comprehend the shocking nightly news? What if they could understand the latest gossips from our weekends… “She left with who?… He got arrested for what!?”

More Awe-Inspiring GIFs from Jamie Beck and Kevin Burg There was a time, not too long ago, when the term "cinemagraph" was being thrown around and internet culture gravitated toward this amalgamation of still shots and modest yet aesthetically effective movement. New York-based photographer Jamie Beck and her counterpart Kevin Burg first coined the term last year, gaining a lot of recognition for their cinematic images with subtle movement. My Modern Met even had the opportunity to interview the creative forces behind the perfected animated gifs. Since then, the duo has continued to develop breathtaking gifs, often focusing on fashion, and share it on their blog From Me To You. The motion in each image exhibits just the right amount of movement. Whether it's hair or clothing hit by a slight breeze, dangling jewelry swaying back and forth, or the endless burning flame in an otherwise frozen world, the calculated action serves a purpose in adding to the mood or aesthetic.

Classic Photos of Celebrities Some classic photo’s I got compiled up! I do not own these pictures, someone else had taken them…i am unsure who to give credit for, but enjoy! Jimi Hendrix & Mick Jagger, New York, 1969 The Beatles and Mohammad Ali, 1964 Martin Luther King Jr. and Marlon Brando (The Godfather)