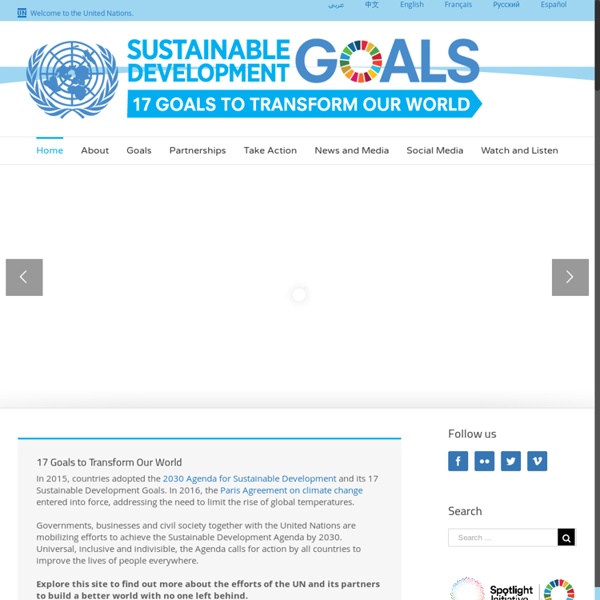 titled 3 September 2015 – As United Nations Member States prepare to adopt a new set of Sustainable Development Goals, a ground-breaking collaboration of campaigners, public figures, companies and civil society groups is uniting to tell seven billion people in seven days that “it’s time to change the world.” During a press conference at UN Headquarters today, the Global Goals campaign, founded by filmmaker Richard Curtis, was announced as aiming to make the 17 UN Goals famous and to push for their full implementation worldwide. Described as an “unprecedented effort,” the campaign is supported by a variety of other social movements including action/2015 – a coalition of over 2000 organizations – and Global Citizen, a community of ordinary people that help fight extreme poverty. The Agenda, its 17 proposed Goals and 169 targets aim to be a charter for people and the planet in the twenty-first century.

Climate Change Conference 2017: COP23 Welcome to the United Nations. It's your world! Go to... COP23: UN Climate Change Conference 2017 About COP23 A Report Covers The Reasons That Millions Of Kids Die Or Suffer. But All The News Isn't Gloomy : Goats and Soda China is one of the countries where childhood mortality is dropping. Above, students practice martial arts. ChinaFotoPress via Getty Images hide caption Emergency Management Manual Victoria The Emergency Management Manual Victoria (EMMV) contains policy and planning documents for emergency management in Victoria, and provides details about the roles different organisations play in the emergency management arrangements. Emergency Management Victoria maintains the Manual, in collaboration with Victoria’s emergency management agencies. The Role Statements (Part 7) and the Contact Directory (Part 10) are updated annually.

'Significant Concentrations' of Mercury In Blood Cells Of Autistic Children Loading ... Mercury is a potent neurotoxin. Even the smallest amounts can cause cumulative adverse effects. Zika Virus Expected to Spread Through the Americas The World Health Organization warned Monday of the spread of the mosquito-borne Zika virus through the Americas, as scientists rush to better understand the disease’s suspected links to a surge in fetal deformities in Brazil and governments issue travel warnings to pregnant women. Brazilian health officials believe Zika has caused a spike in the number of babies born with microcephaly, a condition in which a baby’s brain and head don’t develop to a healthy size, leading to brain damage. Nearly 4,000 cases of microcephaly have been tracked since the outbreak began—more than 30 times the number in a typical year, Reuters reported. The disease was first reported in Brazil in May 2015. Canada and Chile are the only two countries the virus isn’t expected to reach, because the Aedes mosquitoes—the main means of transmission—aren’t there yet, WHO officials said.

Sustainable Thoughts What represents the greatest threat to mankind? Climate Change? A massive earthquake? An asteroid from space? Believe it or not the most likely candidate is this: This is a graph of exponential growth and it represents one of the most powerful forces on the planet. What is an Ecological Footprint? We need food, shelter and heating (in some locations) to survive. Our planet’s ecological resources help fulfill these needs. But how many resources do we consume? This question can be answered using the Ecological Footprint. Just as a bank statement tracks income against expenditures, Ecological Footprint accounting measures a population’s demand for and ecosystems’ supply of resources and services.