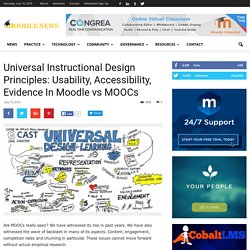 We have witnessed its rise in past years. We have also witnessed the wave of backlash in many of its aspects. Content, engagement, completion rates and churning in particular. These issues cannot move forward without actual empirical research. An article from the recent release of the Proceedings from the 2016 Conference of the Human Computer Interaction (HCI) Society of Korea, that took place last January, brings new evidence to the table. Design Principles as measuring stick in online education is not a new concern. Elias provided 40 categories wrapped around 8 UID principles: 11 Essentials for Excellent ePortfolios. According to the Office of Research Consumer Guide, portfolios are "a collection of student work representing a selection of performance. 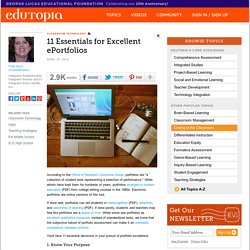 " While artists have kept them for hundreds of years, portfolios emerged in modern education (PDF) from college writing courses in the 1980s. Electronic portfolios are online versions of this tool. If done well, portfolios can aid students in metacognition (PDF), reflection, and ownership of learning (PDF). If done poorly, students and teachers may feel like portfolios are a waste of time. While some see portfolios as excellent qualitative measures instead of standardized tests, we know that the subjective nature of portfolio assessment can make it an unreliable comparison between schools. You'll face 11 essential decisions in your pursuit of portfolio excellence. Seven Principles for Classroom Design: The Learning Space Rating System. Key Takeaways The Learning Space Rating System tool enables scoring a classroom's design to see how well it supports active learning. 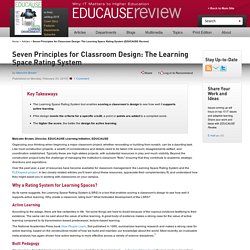 If the design meets the criteria for a specific credit, a point or points are added to a compiled score. The higher the score, the better the design for active learning. Malcolm Brown, Director, EDUCAUSE Learning Initiative, EDUCAUSE Organizing your thinking when beginning a major classroom project, whether renovating or building from scratch, can be a daunting task. Over the past year, a pair of resources have become available for classroom management: the Learning Space Rating System and the FLEXspace project. Learning spaces. How the network works. It’s a Sunday morning, and I’m sipping a fresh cup of coffee while engaging in a conversation about higher education and institutional change (which also happens to be the central concern of my dissertation). 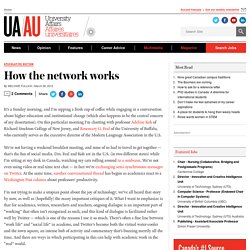 On this particular morning I’m chatting with professor Adeline Koh of Richard Stockton College of New Jersey, and Rosemary G. Feal of the University of Buffalo, who currently serves as the executive director of the Modern Language Association in the U.S. Twitter. Student guide to social media. Using social media to engage and develop the online learner in self-determined learning. Center for Lifelong Learning (C3L), Carl von Ossietzky Universität Oldenburg, Oldenburg, Germany (Received 6 June 2013; final version received 9 October 2014; Published 10 November 2014) Social media technology provides educators with an opportunity to engage learners in the online classroom, as well as to support development of learner skills and competencies. 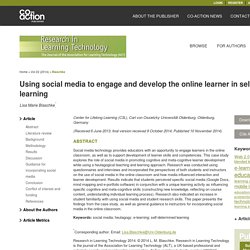 This case study explores the role of social media in promoting cognitive and meta-cognitive learner development while using a heutagogical teaching and learning approach. Research was conducted using questionnaires and interviews and incorporated the perspectives of both students and instructors on the use of social media in the online classroom and how media influenced interaction and learner development. Keywords: social media; heutagogy; e-learning; self-determined learning *Corresponding author. Research in Learning Technology 2014. © 2014 L. Frequency of Social Media Use. As in 2013, Pew Research asked users of each platform how often they engage with the site, whether on a daily, weekly or less frequent basis. 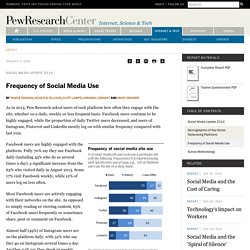 Most Facebook users are actively engaging with their networks on the site. Almost half (49%) of Instagram users are on the platform daily, with 32% who say they go on Instagram several times a day. Some 36% of Twitter users visit the site daily, with 22% saying they go on Twitter several times a day. The Social Media Manager’s Definitive Glossary, 2014 Edition. Welcome to the 2014 edition of the Hootsuite Social Media Glossary. 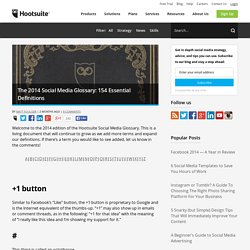 This is a living document that will continue to grow as we add more terms and expand our definitions. If there’s a term you would like to see added, let us know in the comments! +1 button Similar to Facebook’s “Like” button, the +1 button is proprietary to Google and is the Internet equivalent of the thumbs-up. “+1” may also show up in emails or comment threads, as in the following: “+1 for that idea” with the meaning of “I really like this idea and I’m showing my support for it.”

This thing is called an octothorpe. Adopting Analytics is a cultural evolution, not a finite project. To be Young, Digital, and Black. 3.4.10 | It wasn’t that long ago that talk of “digital divide” dominated the news—referring to the notable gap between those who had computers and web access in their homes (typically white and Asian youth) and those who did not (black and Latino youth). 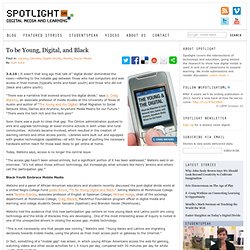 “There was a narrative that evolved around the digital divide,” says S. Craig Watkins, an associate professor of media studies at the University of Texas at Austin and author of “The Young and the Digital: What Migration to Social Network Sites, Games and Anytime, Anywhere Media Means for our Future.” “There were the tech rich and the tech poor.” Soon there was a push to close that gap. The Clinton administration pushed to wire and upgrade technology at lower-income schools in both urban and rural communities. 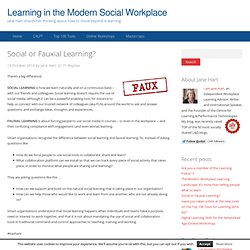 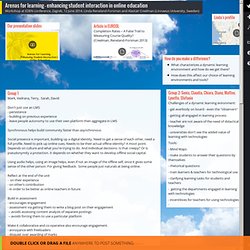