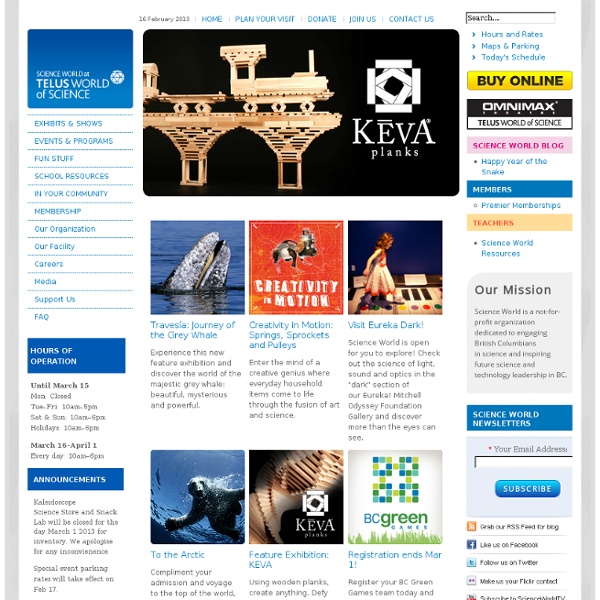 AAAS Science Assessment ~ Home Free Online Course Materials | Courses 27 Science Fictions That Became Science Facts In 2012 We may never have our flying cars, but the future is here. From creating fully functioning artificial leaves to hacking the human brain, science made a lot of breakthroughs this year. 1. Quadriplegic Uses Her Mind to Control Her Robotic Arm At the University of Pittsburgh, the neurobiology department worked with 52-year-old Jan Scheuermann over the course of 13 weeks to create a robotic arm controlled only by the power of Scheuermann’s mind. The team implanted her with two 96-channel intracortical microelectrodes. 2. Once the robot figures out how to do that without all the wires, humanity is doomed. 3. Photo Courtesy of Indigo Moon Yarns. At the University of Wyoming, scientists modified a group of silkworms to produce silk that is, weight for weight, stronger than steel. 4. Using an electron microscope, Enzo di Fabrizio and his team at the Italian Institute of Technology in Genoa snapped the first photos of the famous double helix.Source: newscientist.com / via: davi296 5. 6. 7. 8. 10.

10 Biggest High School Football Stadiums In Texas High school football is in the blood of Texas and as they say, everything is bigger in Texas, including our stadiums. 10. Stallworth Stadium – Baytown, TX – 16,500 capacity With a seating capacity of 16,500 Stallworth stadium comes in as the 10th largest high school football stadium in Texas. 9. Just around the corner from Baytown is the next stadium on our list; Pasadena’s Veteran’s Memorial Stadium. The 1931 Histomap: The entire history of the world distilled into a single map/chart. The Vault is Slate's history blog. Like us on Facebook, follow us on Twitter @slatevault, and find us on Tumblr. Find out more about what this space is all about here. This “Histomap,” created by John B. Sparks, was first printed by Rand McNally in 1931. This giant, ambitious chart fit neatly with a trend in nonfiction book publishing of the 1920s and 1930s: the “outline,” in which large subjects (the history of the world! The 5-foot-long Histomap was sold for $1 and folded into a green cover, which featured endorsements from historians and reviewers. the actual picture of the march of civilization, from the mud huts of the ancients thru the monarchistic glamour of the middle ages to the living panorama of life in present day America. The chart emphasizes domination, using color to show how the power of various “peoples” (a quasi-racial understanding of the nature of human groups, quite popular at the time) evolved throughout history.

How To Get Started With Open Notebook Science Open Notebook Science (ONS) is slowly making a splash in the scientific community. By publishing all experiments in online notebooks via blogs and wikis, scientists are bypassing the lengthy patent process and working toward creating faster solutions to world problems. Open Notebook Science (ONS) is “the practice of making a researcher’s laboratory notebook, and all associated supporting data, public in as close to real time as possible,” says Dr. Jean-Claude Bradley, Associate Professor of Chemistry at Drexel University in Pennsylvania and pioneer of ONS. The first ONS research project was Bradley’s UsefulChem project. He opened the walls of his lab to make all data open to the public through a wiki and blog mashup. While his open approach is not the standard for science (especially in Chemistry), ONS is gaining rippled momentum in the scientific community as more and more scientists are seeing the value in collaborating on lab experiments. What are the Benefits and Risks of ONS? Tools:

8 Awesome Websites to Take Free College Courses Online The sites below offer free online college level classes to anyone willing to spend the time on them. Each differ – some have all of the materials online and some may want you to purchase (borrow?) a textbook to follow along with. Each of them offers complete courses with only one thing missing: the credit for the coursework to put towards a matriculated degree. MIT OpenCourseware Massachusetts Institute of Technology was a pioneer in offering online college courses and they still have the most diverse and in-depth collection of classes available anywhere. Carnegie Mellon OpenLearning Carnegie Mellon, based in Pittsburgh, PA, has a variety of courses available for anyone online. Khan Acadamy Salman Khan began putting videos on YouTube to help with tutoring a cousin. Today, there are over 1000 videos on KhanAcademy, which is now a 501(c)(3) non-profit. University of California at Berkeley Stanford University iTunesU Tufts OpenCourseware Open University LearningSpace Johns Hopkins OpenCourseware

Bill Nye | The Science Guy Bill Nye, scientist, engineer, comedian, author, and inventor, is a man with a mission: to help foster a scientifically literate society, to help people everywhere understand and appreciate the science that makes our world work. Making science entertaining and accessible is something Bill has been doing most of his life. In Seattle Nye began to combine his love of science with his flair for comedy, when he won the Steve Martin look-alike contest and developed dual careers as an engineer by day and a stand-up comic by night. Nye then quit his day engineering day job and made the transition to a night job as a comedy writer and performer on Seattle’s home-grown ensemble comedy show “Almost Live.” This is where “Bill Nye the Science Guy®” was born. The show appeared before Saturday Night Live and later on Comedy Central, originating at KING-TV, Seattle’s NBC affiliate. While working on the Science Guy show, Nye won seven national Emmy Awards for writing, performing, and producing.