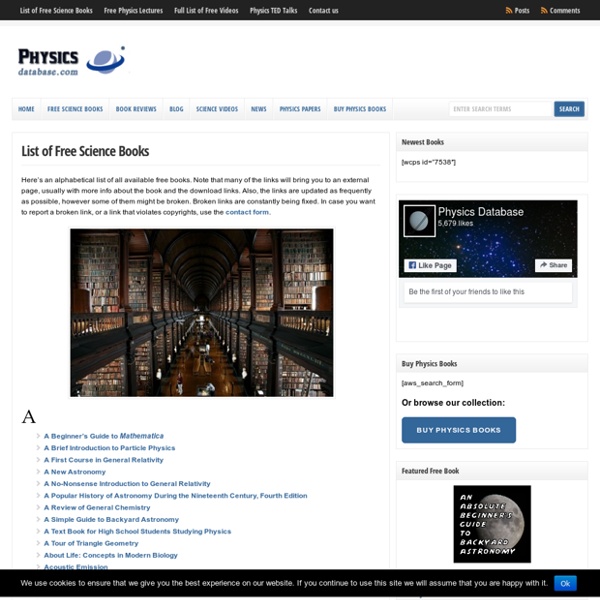 Here’s an alphabetical list of all available free books. Note that many of the links will bring you to an external page, usually with more info about the book and the download links. Also, the links are updated as frequently as possible, however some of them might be broken. Broken links are constantly being fixed. In case you want to report a broken link, or a link that violates copyrights, use the contact form. Kinetic Theory

Einstein for Everyone Einstein for Everyone Nullarbor Press 2007revisions 2008, 2010, 2011, 2012, 2013 Copyright 2007, 2008, 2010, 2011, 2012, 2013 John D. Norton Published by Nullarbor Press, 500 Fifth Avenue, Pittsburgh, Pennsylvania 15260 with offices in Liberty Ave., Pittsburgh, Pennsylvania, 15222 All Rights Reserved John D. 10 Surprisingly Brutal Facts About Dragonflies Animals If somebody asked you to list all the insects you liked, you could probably give an honest answer in the same breath it takes you to violently exhale after being asked such a ridiculous question. Because unless you’re an entomologist, the answer is always the same: butterflies, dragonflies, and ladybugs—pretty and harmless, and infinitely unlikely to burrow under your skin while you sleep. But give a dragonfly a chance to grow three feet long, and suddenly they don’t seem quite so harmless. In fact, if the Meganeura, or giant dragonflies, of prehistory were still around, they might be in charge of the planet instead of humans. That’s because dragonflies are some of the most brutal killers in the insect world.

Stephen Hawking's Time Machine In an article in the Daily Mail this week, British cosmologist Stephen Hawking outlined not one, but three, theoretically realistic ideas for traveling through time, one of which he says is even practical. The Fourth Dimension First, though, you have to get your head around the notion that time is a dimension, just like width, height and length. Hawking uses the example of driving in your car: You go forward. That’s one direction. You turn left or right, that’s a second. Books At PBFA All the sellers on this site are members of a properly constituted association of booksellers. Each association binds its members to a strict code of practice. This means you can buy with confidence. We mainly sell books - from ancient to modern - but you may also find maps, prints, ephemera, manuscripts and artwork. EDINBURGH This weekend !!!

Is alcohol more dangerous than ecstasy?" Scientists in Britain are proposing a complete revamping of drug classifications in the wake of findings that reveal some major discrepancies between a drug's legality and its safeness. A study surveying health, crime and science professionals regarding the dangers of a set of 20 legal and illegal drugs, published in The Lancet in March 2007, found that alcohol and tobacco, which are legal in Britain and the United States, are considered by experts to be more dangerous than ecstasy and marijuana, which are illegal in both countries. In Britain, under the Misuse of Drugs Act, illegal drugs (including prescription drugs sold on the street) are classified as A, B or C. Class A is supposed to be the most harmful, and Class C is supposed to be the least harmful. For instance, heroin is a class A drug, and marijuana is a class C drug.

21 Awesome Animals Who Understand The Priceless Struggle Of Being A Mommy Here's to the moms out there for being the best at what they do, and making it look so easy. You're what keeps this world going. Share this with the moms in your life who are so darn amazing! 10 Futuristic Materials Lifeboat Foundation Safeguarding Humanity Skip to content Switch to White Astronomers aim to 'capture' a black hole French astronomer Pierre-Simon Laplace predicted the existence of black holes way back in 1796, but we’ve yet to capture one on camera. The Event Horizon Telescope will bring together astronomy’s greatest radio telescopes in an attempt ‘photograph’ the supermassive black hole at the heart of the Milky Way Where would science fiction be without black holes?

Luzinterruptus Creates a Stunning Light Installation Featuring Hundreds of Giant Raindrops This past May Spanish art collective Luzinterruptus took over Campo de la Cebada in Madrid, a site earmarked for the construction of a public facility, and created an interactive installation using 800 condoms filled with blue-dyed water and tiny lights. The project titled "Prophylactic Rain that Doesn’t Wet Anything" aimed to take control of the public space creating a meeting place for curious tourists and locals who were invited to interact with the squeezable, and sinuous raindrops. The exhibit ended predictably when local children decided to use the raindrops as little piñatas and started bursting the condoms with sharp objects to get the shiny surprises hidden inside. Find out more about the project here. via [IanBrooks]