Managing rapid urban growth in the poorer parts of the world 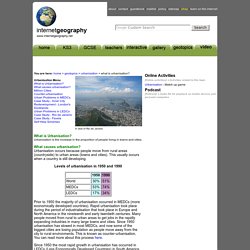 The three main causes of urbanisation in LEDCs since 1950 are: 1. 2. 3. The UN predicts that by 2030 60% of the world's population will live in urban environments. Million Cities A million city is, yes you guessed it, a city with one million (or more) inhabitants. 1. You can find out more about the largest cities in the world (including predictions for the future) here. Counter-urbanisation 1. 2. 3. 4. Traffic problems. First-time buyers will get priority, Labour promises. 15 October 2014Last updated at 19:55 ET First-time buyers will be given priority when communities in England "take the lead" in building new housing, Labour is promising. 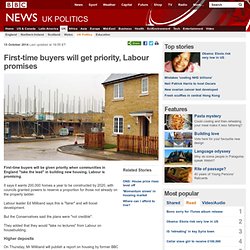 It says it wants 200,000 homes a year to be constructed by 2020, with councils granted powers to reserve a proportion for those not already on the property ladder. Labour leader Ed Miliband says this is "fairer" and will boost development. But the Conservatives said the plans were "not credible". They added that they would "take no lectures" from Labour on housebuilding. Higher deposits On Thursday, Mr Miliband will publish a report on housing by former BBC Trust chairman Sir Michael Lyons, arguing that too much potential development land is being "held as a speculative investment when local people need homes".

Figures this week from the Office for National Statistics show house prices across the UK rose by 11.7% in the year to August. Minister Brandon Lewis said the government's economic plan was helping housebuilding. An example of how an industrial building can be converted into a trendy apartment, The Bakery, Belfast. Changing Urban Environments Key Terms. The most successful ever renewal schemes. Urban development corporations such as the London Docklands Urban Development Corporation played a major role in regeneration policy in the 1980s. 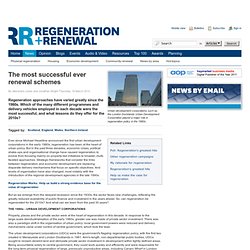 By Alexandra Jones and Jonathan Wright Thursday, 18 March 2010 Ever since Michael Heseltine announced the first urban development corporations in the early 1980s, regeneration has been at the heart of urban policy. But in the past three decades, economic crises, political shake-ups and organisational change have caused regeneration to evolve from focusing mainly on property-led initiatives to broader, multi-faceted approaches. Strategic frameworks that consider the links between regeneration and economic development are replacing disparate delivery mechanisms that focus on specific objectives. And levels of organisation have also changed, most notably with the introduction of the regional development agencies in the late 1990s. Regeneration Works: Help us build a strong evidence base for the value of regeneration. 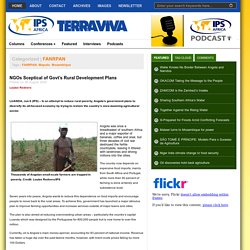 Thousands of Angolan small-scale farmers are trapped in poverty. Credit: Louise Redvers/IPS Angola was once a breadbasket of southern Africa and a major exporter of bananas, coffee and sisal, but three decades of civil war destroyed the fertile countryside, leaving it littered with landmines and driving millions into the cities. The country now depends on expensive food imports, mainly from South Africa and Portugal, while more than 90 percent of farming is done at family and subsistence level. Seven years into peace, Angola wants to reduce this dependence on food imports and encourage people to move back to the rural areas. Currently, oil is Angola’s main money-spinner, accounting for 83 percent of national income. The Angolan government has been thinking along similar lines. Agile, it's not just for big complex projects anymore.