Rape, abuses in palm oil fields linked to top beauty brands. MagAMedia. Conservative News by the people, for the people. People are still working to connect the dots but several verified accounts have confirmed the accounts have been hacked. 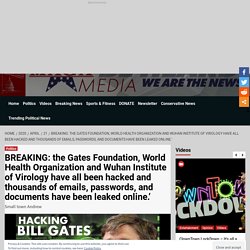 Documents online under the search term “Gates Hack” already has a list of donors to the Gates Foundation. Rod Oram: Nature is showing us the way. Environment We must learn Covid-19's lessons for our relationship with the planet and help nature restore the living systems on which human life utterly depends, writes Rod Oram (This is the first of three articles at Newsroom in conjunction with Pure Advantage and the Edmund Hillary Fellowship on the importance of regenerative agriculture. 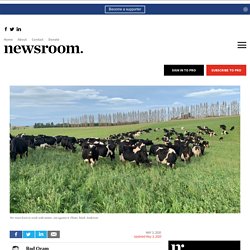 Rubbish is piling up and recycling has stalled – waste systems must adapt. Coronavirus has revealed just how fragile our waste cycle is. 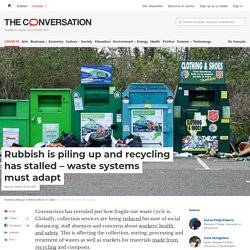 Globally, collection services are being reduced because of social distancing, staff absences and concerns about workers’ health and safety. This is affecting the collection, sorting, processing and treatment of wastes as well as markets for materials made from recycling and composts. In the UK alone, 46% of recycling facilities have reduced or stopped treatment. Domestic glass and some recycling, garden and food waste collection schemes have been cancelled or restricted, with almost all household waste recycling centres closed. Think of coronavirus as a test run: Australian military leaders warn we must prepare for worse - ABC News. The pandemic as a war and Trump, the 'medic-in-chief' A few weeks after the outbreak of the coronavirus in Wuhan, Chinese leader Xi Jinping vowed, with typical communist party bravado, to win the "people's war" against the novel threat. 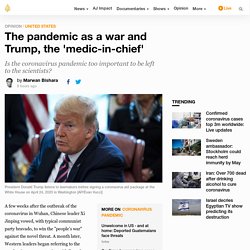 A month later, Western leaders began referring to the pandemic as a war, starting with French President Emmanuel Macron and British Prime Minister Boris Johnson, followed by America's Donald Trump, boasting of his new grand title, "war president", fighting an "invisible enemy". The war metaphor has a long history of rhetorical usage: the war on women, the war on science, the war on religion and the war on graffiti, as well as cultural wars and wars of ideas. But it is the articulation of the war metaphor by governments, especially the US government, that has generated much controversy and even scorn, considering the abysmal results of the US war on poverty, the war on cancer, various trade wars, as well as the devastating war on drugs, the war on crime, and of course, the "war on terror".

Access Denied. What would and should a post-pandemic world look like? Since the outbreak of the coronavirus pandemic, there has been a general feeling that the world is at an historical turning point, that nothing will ever be the same again. 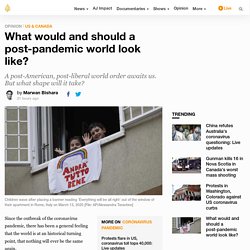 The realists ponder and the (neo)liberals bemoan the comeback of the strong state, the rise of nationalism, the ascendance of China at the expense of America, as well as the failure of global governance, the retreat of globalisation, and increasing divisions within "united Europe". Indeed, as the coronavirus wreaks havoc across the world, national and local governments have taken a charge in directing the fight against a pandemic, which is by definition global and would necessitate global action - one would imagine. Russell Brand - Corona Lockdown! Can anything positive come from this?! A little exercise to make sure that, after the virus crisis, things don’t start again as they were before. This is an exercice extracted from a paper in French (translated in English by Stephen Muecke) in AOC-Media A little exercise to make sure things don’t restart after the lock out just as they were before* If you wish to share your auto description: here is a platform: Proposed by @BrunoLatourAIME following arguments proposed in Down to Earth Politics in the New Climatic Regime (Polity, 2018). 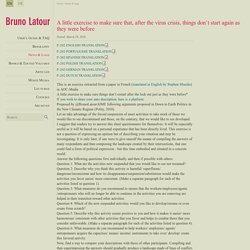 Let us take advantage of the forced suspension of most activities to take stock of those we would like to see discontinued and those, on the contrary, that we would like to see developed. I suggest that readers try to answer this short questionnaire for themselves. It will be especially useful as it will be based on a personal experience that has been directly lived. This exercise is not a question of expressing an opinion but of describing your situation and may be investigating. The world's population is nearing 8 billion. That's not great news. This explosive growth concerns leaders at the United Nations, who created World Population Day in 1989 to raise awareness about the problems caused by overpopulation. 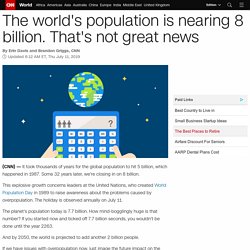 The holiday is observed annually on July 11. Population of AFRICA 2019. United Nations Office for the Coordination of Humanitarian Affairs - occupied Palestinian territory. PowerPoints Public Health in the Anthropocene. Appropedia. Plan B Documentary. Plan B Documentary Based on Lester Brown’s Plan B book series, this 90-minute film, by award-winning film producers Marilyn and Hal Weiner, premiered on PBS stations across the United States on March 30, 2011. 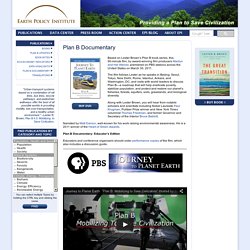 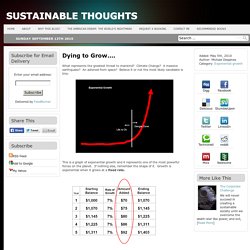 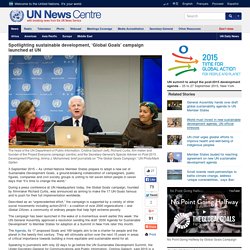 During a press conference at UN Headquarters today, the Global Goals campaign, founded by filmmaker Richard Curtis, was announced as aiming to make the 17 UN Goals famous and to push for their full implementation worldwide. Described as an “unprecedented effort,” the campaign is supported by a variety of other social movements including action/2015 – a coalition of over 2000 organizations – and Global Citizen, a community of ordinary people that help fight extreme poverty. Ited Nations 2015: Time for Global Action. Sustainable development goals - United Nations. Avoiding the Great Collision: “We Can Save What is Left” I believe that a central question facing societies today — perhaps the central question — is whether the world economy can be tamed to operate within constraints that protect and restore the natural world. There is ample evidence that it is not so tamed today.

Almost universally, even governments agree that the environmental impacts of today’s economic activity are unacceptably large and must be reduced. Recently, major international assessments of climate change and declining ecosystem services have added new weight to this conclusion. How Did We Get Into This Mess? Many of our current crises are the long-term results of a meeting which took place 60 years ago By George Monbiot. Published in the Guardian 28th August 2007 For the first time, the United Kingdom’s consumer debt now exceeds our gross national product: a new report shows that we owe £1.35 trillion(1). Solutions. Sustainia100 2016 This is the year of ‘Systemic Opportunity’! Now in its fifth year, the Sustainia100 has tracked more than 4,500 solutions to date from all over the world. This year’s edition features solutions deployed in 188 countries, and more than half come from small and mid-sized enterprises.

Showcasing everything from health solutions that tackle climate change, to renewable energy products that alleviate gender inequality, this year’s publication presents 100 solutions that respond to interconnected global challenges and help achieve the Sustainable Development Goals. Solutions you must know about! SD annual report 12 13 (ipdf) by Lee Pinney. Calculate your score on the Torfaen Sustainability Index: join the 551 other people who have calculated theirs! Titled. Global Environment Outlook 4 (GEO-4)

Population Matters - for a sustainable future. Our population is growing There are now more than 7,500,000,000 people on planet Earth. (UN) It took until the early 1800s for the world population to reach one billion. Now we add a billion every 12-15 years. World Population Growth. Current World Energy Consumption. TheWorldCounts, 15 March, 2014 These are hot topics these days... ...Energy Consumption, Energy Savings and Global Warming. Emergency services and safety. Emergency Management Victoria. Under the Emergency Management Act 2013, the State Crisis and Resilience Council (SCRC) is responsible for developing a three-year rolling Emergency Management Strategic Action Plan.

This paper reports exploratory research conducted in a flood-impacted rural Australian town to identify the factors which residents perceived as supporting community resilience to disaster. Checklists and forms. Accident and hazard reporting. Definitions. How much disease burden can be prevented by environmental interventions? Victoria bushfire: Affected residents criticise CFA emergency response. Two elderly women inside car swept away in Hunter flood, police confirm. Could not load plugins: File not found. Flood consequences. Floods impact on both individuals and communities, and have social, economic, and environmental consequences. Victorian Council of Social Service. Natural disasters and community resilience: A framework for support. Taking responsibility for disaster risk reduction. Taking responsibility for disaster prevention. Emergency Portal. The National Security Hotline is the single point of contact for the public to report possible signs of terrorism.