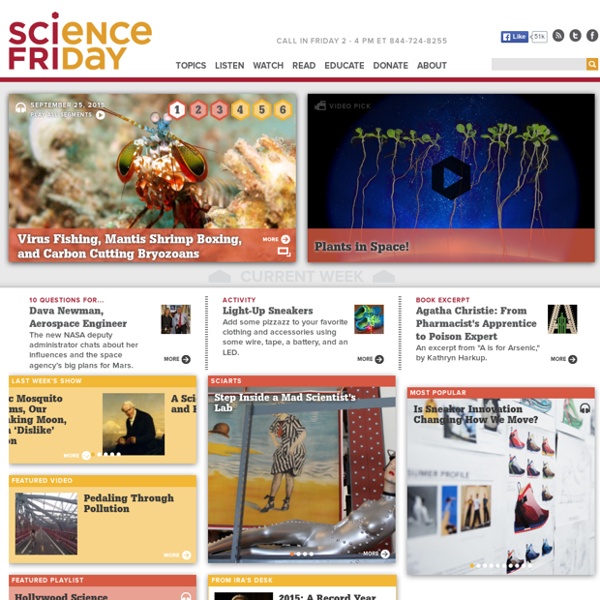 Don't miss the new documentary film Particle Fever. Not only does it take you behind the scenes at the Large Hadron Collider and the search for the Higgs boson, but it explains in everyday language just why the search for Higgs was so important, how the size of the particle is crucial to understanding the universe and whether we may be the only universe there is, and how the lives and reputations of scientists hinged on the 40-year quest. The filmmakers talk about it here.

The Top 75 ‘Pictures of the Day’ for 2012 *Update: The Top 100 ‘Pictures of the Day’ for 2012 have just been published. Click here to check out the most up-to-date post! After the positive reception from last year’s “Top 50 ‘Pictures of the Day’ for 2011“, the Sifter promised to highlight the top 25 ‘Pictures of the Day‘ at the end of every quarter, eventually culminating in an epic Top 100 for 2012. It’s hard to believe we’re already into the final quarter of 2012. Collection Online Featuring nearly 1600 artworks by more than 575 artists, the Collection Online presents a searchable database of selected artworks from the Guggenheim’s permanent collection of over 7,000 artworks. The selected works reflect the breadth, diversity, and tenor of the Solomon R. Guggenheim Foundation’s extensive holdings from the late 19th century through the present day, and are continually expanded to include a larger representation of the museum’s core holdings as well as recent acquisitions.

Levantine Arabic Levantine Arabic (Arabic: اللهجة الشامية‎, al-lahjah aš-šāmiyyah), is a broad dialect of Arabic spoken in the 100 to 200 km-wide Eastern Mediterranean coastal strip.[2] It is considered one of the five major varieties of Arabic.[3] In the frame of the general diglossia status of the Arab world, Levantine Arabic is used for daily spoken use, while most of the written and official documents and media use Modern Standard Arabic. It is part of Eastern Arabic that includes Mesopotamian Arabic and penisnsular Arabic along with Levantine. On the basis of the criterion of mutual intelligibility, Levantine Arabic could be regarded as a self-standing language (with different variants or dialects as explained below), as distinct from other members of the Arabic language family such as Egyptian Arabic, Maghrebi Arabic or Peninsular Arabic, in the same way as French, Spanish, Italian and Romanian are all descended from Latin but are separate languages within the family of Romance languages. NB.

BanksyInside - A Digital Magazine Dropping What's Fresh on the Web The mysterious Banksy just released some new paintings on his website. You heard it right, Banksy painted on a canvas. All Banksy fans will appreciate. Here are a few of my favourites. Schools Should Teach Science Like Sports Suppose you wanted to teach children to play baseball or softball. How would you go about doing it? One approach might be to sit them down and start having them memorize the rules of the game, the dimensions of the field, the names and statistics of past players, and a host of other facts. You would stop teaching them periodically to review the material in preparation for multiple-choice assessment tests. The students who showed a great aptitude for memorizing large numbers of facts could go into honors classes where they would memorize even larger numbers of facts. At the end of the process, without ever leaving the classroom, how well do you think the children would be able to play baseball or softball?

Iraqi Arabic Mesopotamian Arabic, also known as Iraqi Arabic, is a continuum of mutually intelligible Arabic varieties native to the Mesopotamian basin of Iraq as well as spanning into central and northern Syria,[2] western Iran,[2] southeastern Turkey,[3] and spoken in Iraqi diaspora communities. In its various forms, it is the official vernacular of Iraq.[citation needed] Rashad Alakbarov Paints with Shadows and Light Artist Rashad Alakbarov from Azerbaijan uses suspended translucent objects and other found materials to create light and shadow paintings on walls. The best part is that you can easily create something similar at home – all you need is one or two lamps and some items from your desk. The stunning light painting below, made with an array of colored airplanes has found its way to exhibitions like the Fly to Baku at De Pury Gallery in London. Rashad adds, “Above the cloud with its shadow is the star with its light. Above all things reverence thyself.”

5 Quick Tips for Secondary Classroom Management That Actually (I Promise You!) Work This fall I will begin my sixth year of teaching, which is still weird to see written down because it seems like just yesterday I was struggling through my first. (And second. And probably third, too, for good measure.) Classroom management was my biggest struggle in those beginning-teaching years. I went in suspecting I would have classroom management in the bag because I'd had pretty extensive experience working with kids from babysitting, being a camp counselor and other volunteer-type roles.

Middle Eastern Schools The Presidio of Monterey’s DLIFLC Undergraduate Education houses three Middle East resident basic course schools. The student population consists of all four branches of the U.S. Armed Services, the U.S. 9 Books Scarier Than Any Horror Movie There is nothing better than a good ghost story. It might be tempting to pop in one of your scarier movies when you want to get into the Halloween spirit, but there are plenty of novels sure to keep you up for just as many nights. Just be careful if you read these titles in a public place.

Teaching Calculus The following answer to a question we’ve all been asked was posted yesterday on a private Facebook page for AP Calculus readers. The author, Allen Wolmer is a teacher and AP Calculus reader. He teaches at Yeshiva Atlanta High School, in Atlanta, Georgia. I reprint it here with his kind permission. AA Degree Office Due to reduction in staff, there will be a longer than usual wait time for a response from the AA Degree Advisor. Your patience is appreciated. ALL FORMS FOR THE AA DEGREE OFFICE ARE AT THE MENU TO THE LEFT UNDER "REGISTRAR FORMS." You will find the AA Degree Application and Degree Plan / Information form, which includes a list of all CLEP/DSST tests accepted for our program. You will also find an FAQ. Please read through the information provided.

The 32 Greatest Unscripted Movie Scenes Much to the dismay of screenwriters, movies scripts aren’t always set in stone. They are often like living objects constantly evolving during the filming process. Some films, like Jaws and Annie Hall, don’t even have a finished script when the cameras start to roll.