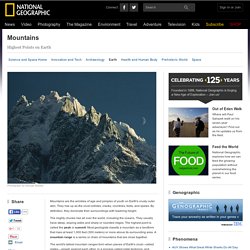 They rise up as the crust collides, cracks, crumbles, folds, and spews. By definition, they dominate their surroundings with towering height. The mighty chunks rise all over the world, including the oceans. They usually have steep, sloping sides and sharp or rounded ridges. The highest point is called the peak or summit. The world's tallest mountain ranges form when pieces of Earth's crust—called plates—smash against each other, in a process called plate tectonics, and buckle up like the hood of a car in a head-on collision. Parts and features of mountains hills and cliffs - synonyms and related words. Brae noun Scottish a slope or the side of a hill brink literary. 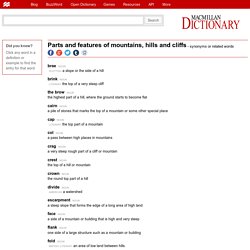 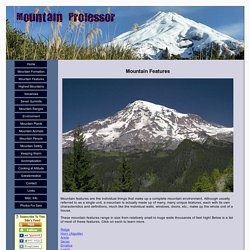 Although usually referred to as a single unit, a mountain is actually made up of many, many unique features, each with its own characteristics and definitions, much like the individual walls, windows, doors, etc., make up the whole unit of a house. These mountain features range in size from relatively small to huge walls thousands of feet high! Below is a list of most of these features. Click on each to learn more. Check out our new Photos page to purchase museum-quality photosby Mountainprofessor.com! World Geography Games: Mountain Ranges. Longest Mountain Ranges in the World - Top Ten. Exploring 7 of Earth’s Great Mountain Ranges. Atlas Mountainscredit: Victor Englebert/Photo Researchers Like hiking? 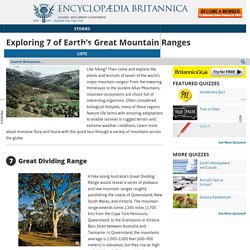 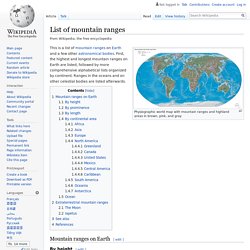 First, the highest and longest mountain ranges on Earth are listed, followed by more comprehensive alphabetical lists organized by continent. Ranges in the oceans and on other celestial bodies are listed afterwards. BBC Earth - Mountain formation - Find out how mountains formed. Mountain formation. To understand mountains we must first know more about their geomorphic history. 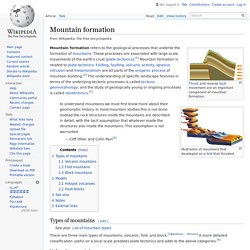 In most mountain studies this is not done: instead the rock structures inside the mountains are described in detail, with the tacit assumption that whatever made the structures also made the mountains. This assumption is not warranted.— Cliff Ollier and Colin Pain[4] Types of mountains[edit] There are three main types of mountains: volcanic, fold, and block.[5][dubious ] A more detailed classification useful on a local scale predates plate tectonics and adds to the above categories.[6] Volcanic mountains[edit] Movements of tectonic plates create volcanoes along the plate boundaries, which erupt and form mountains.

A shield volcano has a gently sloping cone due to the low viscosity of the emitted material, primarily basalt. Fold mountains[edit] When plates collide or undergo subduction (that is – ride one over another), the plates tend to buckle and fold, forming mountains. How Are Mountains Made? Have you ever taken the time to look at the world around you and marvel at its natural beauty? 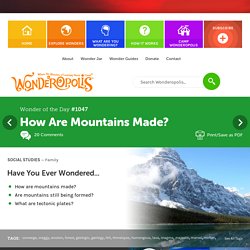 From humongous oceans and dense forests to sweeping plains and rolling hills, nature paints a vivid picture that can take your breath away. Maybe one of the most incredible sights on Earth, though, is a majestic mountain range. From the Himalayas to the Rocky Mountains, there's just something about those tall, craggy peaks that stirs the soul. Have you ever WONDERed how mountains got there, though? Did they fall out of the sky and land where they are? There are several different ways that mountains can form. Many mountains were formed as a result of Earth's tectonic plates smashing together.

When two tectonic plates converge, their edges can crumple kind of like an aluminum can does when you crush it. For example, the tectonic plates that lie underneath India and Asia crashed into each other over 25 million years ago. Mountains can also form along natural fault lines. Mountain. High elevations on mountains produce colder climates than at sea level. 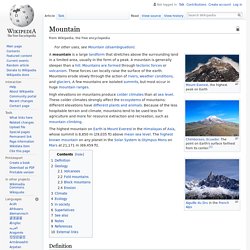 These colder climates strongly affect the ecosystems of mountains: different elevations have different plants and animals. Because of the less hospitable terrain and climate, mountains tend to be used less for agriculture and more for resource extraction and recreation, such as mountain climbing. The highest mountain on Earth is Mount Everest in the Himalayas of Asia, whose summit is 8,850 m (29,035 ft) above mean sea level. The highest known mountain on any planet in the Solar System is Olympus Mons on Mars at 21,171 m (69,459 ft).

Definition There is no universally accepted definition of a mountain. The UN Environmental Programme's definition of "mountainous environment" includes any of the following: Top 10 Most Dangerous Mountains In The World. 70 Millions Years In 2 Minutes - The Himalayas Forming. Formation of Himalayas HD.