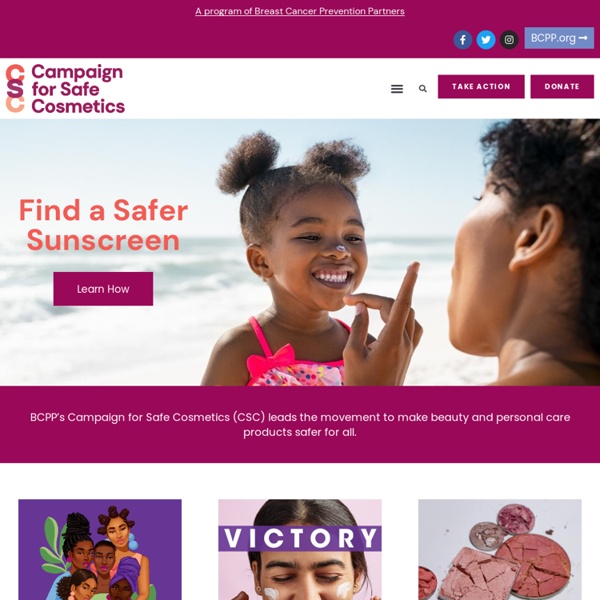 Les dogmes de la nutrition Home | GreenYour.com Top Five Chemicals to Avoid Originally Posted October 2007, Updated 2015 There are thousands of dangerous chemicals in cosmetics today. I've chosen these top five based on their risk, and their widespread useage. Use this list as a guide to help you decipher if what you're buying is truly natural. 1. “Fragrance” can be one or more of 200 chemicals. 2. 3. 4. 5. Home Sodium Laureth Sulfate | Toxics | Health | Science & policy | Toxics | Issues Use in Cosmetics Sodium laureth sulfate (sometimes referred to as SLES) is used in cosmetics as a detergent and also to make products bubble and foam. It is common in shampoos, shower gels and facial cleansers. It is also found in household cleaning products, like dish soap. Health and Environmental Hazards Depending on manufacturing processes, sodium laureth sulfate may be contaminated with measurable amounts of ethylene oxide and 1,4-dioxane. i The International Agency for Research on Cancer ethylene oxide as a known human carcinogen and 1,4-dioxane as a possible human carcinogen. The industry panel that reviews the safety of cosmetics ingredients notes that sodium laureth sulfate can irritate the skin and eyes (though approving of its use in cosmetics). v Sign up for our newsletter Regulatory Status Ethylene oxide and 1,4-dioxane are prohibited on Health Canada's Cosmetic Ingredient Hotlist. Related Ingredients Other ethoxylates may be contaminated with ethylene oxide and 1,4-dioxane.

Beijing to increase threshold for smog red alerts Beijing: The first red alert over air pollution in Beijing almost brought the capital to a standstill in December, with schools shut, construction halted and driving restricted. Now, in a swift policy shift, Beijing plans to issue a red alert based on higher thresholds: neatly changing the equation without necessarily reducing the smog. Loaded: 0% Progress: 0% China's smog engulfs capital Chinese push for investment consistency Trump grooves at black church Creepy clowns 'luring' children into woods Turkish tanks cross into Syria US, China ratify Paris climate agreement Turnbull goes to China Trump: Democrats 'the party of slavery' As the climate summit in Paris opens, the capitals of the world's two most populous nations, China and India, are blanketed in smog, with regulators in Beijing asking factories to limit output and halt construction work. The air quality index, used in many countries, is an aggregate measure of various pollutants in the air. New York Times

2006 Ivory Coast toxic waste dump A truck full of garbage on the streets of Abidjan. Much of Trafigura's toxic waste was dumped in large open areas in the poor suburbs of the city The 2006 Ivory Coast toxic waste dump was a health crisis in Ivory Coast in which a ship registered in Panama, the Probo Koala, chartered by the Dutch-based oil and commodity shipping company Trafigura Beheer BV, offloaded toxic waste at the Ivorian port of Abidjan. The waste was then dumped by a local contractor at as many as 12 sites in and around the city of Abidjan in August 2006. The gas caused by the release of these chemicals is blamed by the UN and the government of Côte d'Ivoire for the deaths of 17 and the injury of over 30,000 Ivorians, with injuries that ranged from mild headaches to severe burns of skin and lungs. Almost 100,000 Ivorians sought medical attention for the effects of these chemicals.[1] The substance was claimed by Trafigura to have been "slops", waste water from the washing of the Probo Koala's tanks. Background[edit]

Meth in the water reveals WA's $2 billion drug problem The hidden high: Flying under the radar on synthetic meth Sewerage tests have revealed West Australians have a $2 billion a year methamphetamine habit. Alarming figures from the West Australian Meth Strategy, released in May, showed 3.8 per cent of people over 14 years old used meth - nearly twice the national average of 2.1 per cent. A waste water trial recently completed in Perth, Geraldton and Bunbury in the past year showed West Australians consumed around two tonnes of methamphetamine annually. The broader Perth metropolitan area accounted for 1.6 tonnes. Police Minister Liza Harvey said the trial had provided science-based evidence of the scale of meth use across WA. "The results provide the most accurate data yet on consumption levels, daily, weekly and seasonal rates, trends, and a broad geographical breakdown," she said. Labor WA leader Mark McGowan has slammed the state's meth use rate, claiming the state government had ignored the problem for too long.