Neoliberalism has conned us into fighting climate change as individuals 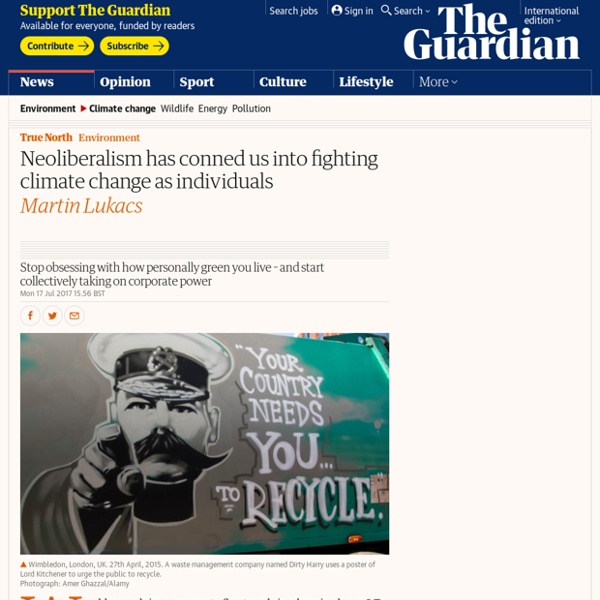 Would you advise someone to flap towels in a burning house? To bring a flyswatter to a gunfight? Yet the counsel we hear on climate change could scarcely be more out of sync with the nature of the crisis. The email in my inbox last week offered thirty suggestions to green my office space: use reusable pens, redecorate with light colours, stop using the elevator. Back at home, done huffing stairs, I could get on with other options: change my lightbulbs, buy local veggies, purchase eco-appliances, put a solar panel on my roof. And a study released on Thursday claimed it had figured out the single best way to fight climate change: I could swear off ever having a child. These pervasive exhortations to individual action — in corporate ads, school textbooks, and the campaigns of mainstream environmental groups, especially in the west — seem as natural as the air we breathe. While we busy ourselves greening our personal lives, fossil fuel corporations are rendering these efforts irrelevant.

Related:  "Resistance is futile, you will be assimilated." So what? • Climate Change

Tribes Create Their Own Food Laws to Stop USDA From Killing Native Food Economies Jacob Butler checks on grapes in the Salt River Pima-Maricopa Indian Community garden. YES! photo by Tristan Ahtone. Climate change 'impacts women more than men' Image copyright Getty Images Women are more likely than men to be affected by climate change, studies show. UN figures indicate that 80% of people displaced by climate change are women. Roles as primary caregivers and providers of food and fuel make them more vulnerable when flooding and drought occur. The 2015 Paris Agreement has made specific provision for the empowerment of women, recognising that they are disproportionately impacted. In central Africa, where up to 90% of Lake Chad has disappeared, nomadic indigenous groups are particularly at risk.

Oil And Gas Giants Spend Millions Lobbying To Block Climate Change Policies [Infographic] Every year, the world's five largest publicly owned oil and gas companies spend approximately $200 million on lobbying designed to control, delay or block binding climate-motivated policy. This has caused problems for governments seeking to implement policies in the wake of the Paris Agreement which are vital in meeting climate change targets. Companies are generally reluctant to disclose such lobbying expenditure and late last week, a report from InfluenceMap used a methodology focusing on the best available records along with intensive research of corporate messaging to gauge their level of influence on initiatives to halt climate change. BP has the highest annual expenditure on climate lobbying at $53 million, followed by Shell with $49 million and ExxonMobil with $41 million.

Democratic Money and Capital for the Commons: Exec. Summary and Full Report Strategies for Transforming Neoliberal Finance Through Commons-Based Alternatives By David Bollier and Pat Conaty. A Report on a Commons Strategies Group Workshop in cooperation with the Heinrich Böll Foundation. Berlin, Germany / September 8-10, 2015 Download this Executive Summary as a PDF.

Forests worldwide threatened by drought Forests around the world are at risk of death due to widespread drought, University of Stirling researchers have found. An analysis, published in the journal Ecology Letters, suggests that forests are at risk globally from the increased frequency and severity of droughts. The study found a similar response in trees across the world, where death increases consistently with increases in drought severity. Dr Sarah Greenwood, Postdoctoral Researcher in Stirling's Faculty of Natural Sciences, said: "We can see that the death of trees caused by drought is consistent across different environments around the world. So, a thirsty tree growing in a tropical forest and one in a temperate forest, such as those we find throughout Europe, will have largely the same response to drought and will inevitably suffer as a result of rising temperatures and changes in rainfall patterns on Earth." "As the temperature of the planet continues to climb, mass tree mortality will hit more forests than ever before.

Taxing the Rich. Imposing A "Pigou Wealth Tax" in the Time of COVID-19 Arthur Cecil Pigou (1877-1959), a British economist, is well known for his contributions to welfare economics. One of the most prolific writers of his time, Pigou wrote over a dozen books and more than 100 articles and pamphlets dealing with both theoretical and practical aspects of welfare economics. His writings cover a wide range of human welfare issues from unemployment to housing to taxation. Some of his most famous books include Wealth and Welfare (1912), The Economics of Welfare (1920), A Capital Levy and a Levy on War Wealth (1920), The Political Economy of War (1921), and The Theory of Unemployment (1933).

This Changes Everything - ScreeningsThe Film – This Changes Everything This Changes Everything will be showing at the Toronto International Film Festival and the Camden International Film Festival in September, 2015. This Changes Everything will be available for theatrical and community screenings this Fall. If you or your organization are interested in hosting an event around the film, please contact: Theatrical ScreeningsCindy Banachcindy@abramorama.com The Death of Neoliberalism Is an Opportunity to Birth a New System President Donald Trump walks on the South Lawn prior to his departure from the White House May 4, 2018 in Washington, DC. (Photo: Alex Wong / Getty Images) Today in the US, as well as globally, we find ourselves in multiple reinforcing crises. There is a crisis of legitimacy in established institutions ranging from Congress, the presidency and the Supreme Court, to the media, the criminal legal system, organized religion, Wall Street banks and corporations. Along with this, there is a loss of belief in social mobility and fairness.

Are Actually Causing Climate Change? This Graphic Will Tell You As the world gears up for a crucial climate summit in Paris this December, a few facts about global warming are worth considering. For one thing, not all nations are equal. The top 10 most polluting countries produce almost three-quarters of all the global emissions. For another, energy plays an outsized role in causing climate change. It accounts for roughly 75% of emissions, internationally speaking.

Global Warming Solutions Stronger storms, rising seas The consequences of global warming are apparent across the nation. Nobody wants our kids to inherit a world where storms like Superstorm Sandy or worse are the new normal. Yet we’ve seen devastating drought and flooding in the Midwest and destructive wildfires in Colorado and California. Coastal communities are threatened by predicted sea level rise. The Hidden Cost of Privatization While the business of business is business, the business of government is not. This piece points out that while there may be a role for public-private partnerships, not only are the cost savings doubtful, but their effect on the ends of government are extremely worrisome. Public-private partnerships conflate public and private interests, and in conflicts between them, the private interests win out.

Naomi Klein: How science is telling us all to revolt In December 2012, a pink-haired complex systems researcher named Brad Werner made his way through the throng of 24,000 earth and space scientists at the Fall Meeting of the American Geophysical Union, held annually in San Francisco. This year’s conference had some big-name participants, from Ed Stone of Nasa’s Voyager project, explaining a new milestone on the path to interstellar space, to the film-maker James Cameron, discussing his adventures in deep-sea submersibles. But it was Werner’s own session that was attracting much of the buzz. It was titled “Is Earth F**ked?” Ten ways we can build a better economic system For the numerous readers who asked: "But what can we do?" after reading my "10 reasons to smash capitalism," here are ten ways we can build a better economic system: 10. We can elect governments that represent people rather than corporations. This will require serious electoral reform and include laws to make it clear corporations are not people and therefore cannot participate in the political process.

Wealthy nations pledged billions to help the poor adapt to climate change. Where did it all go? One of the cruel ironies of climate change is that the poor countries that have contributed the least to the problem are expected to get hit the hardest. A woman and her children walk to the Transit Center to find water in Dolo Ado, Ethiopia. More than 300,000 refugees fled severe drought, conflict and famine in southern Somalia in 2011 into Ethiopia and Kenya (William Davies / AFP/Getty Images) That's why, in recent years, many of the world's wealthier nations — including the United States, Germany, Britain, and Japan — have promised billions of dollars in aid to help developing countries adapt to the impacts of global warming and switch over to cleaner energy sources. In 2009, these nations pledged $30 billion in "fast start" climate finance over the next three years, with a promise to scale that up to $100 billion per year in aid from both public and private sources by 2020. So it's worth asking: What does this climate aid actually look like?

Related:
Related:  "Resistance is futile, you will be assimilated." So what?   -  Climate Change