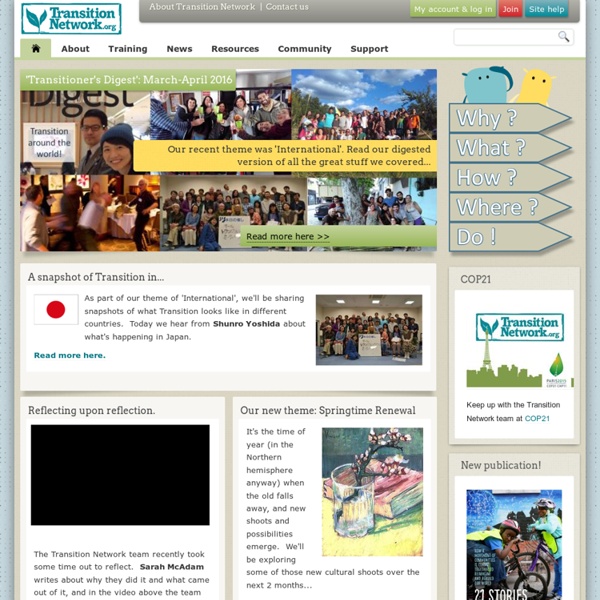 Green Village Set along the terraced slopes of the Ayung River in Sibang, Bali, Green Village is a master-planned community of eighteen dramatically unique homes, each custom designed, rigorously engineered, and hand-constructed to embody the inherent strengths and versatility of bamboo. Within walking distance of the Green School, the architectural innovations and structural vocabulary are an extension of the sustainable principles and artisan craftsmanship of the world famous campus. According to Elora Hardy, creative director of the Ibuku design team, “Green Village has redefined the potential of sustainable materials. It is a place where where people connect with nature. We build light on the land. With very few resources or attention a bamboo shoot can become a structural column within three years, and that house can stand strong for a lifetime.

How farmers can help fight climate change The other week, I spent some time interviewing several business leaders for the North Carolina Sustainability CEnter, asking them about their reactions to President Obama's climate speach. Their responses were decidedly mixed, but one discussion stayed with me. When I asked Charles Sydnor, the owner of Braeburn Farm, about the urgency of climate policy for his industry—he had this to say: "As a farmer, when we look at climate change there are two sides to the story – but we only really talk about one – namely the production of greenhouse gases. Yet agriculture should be part of the solution.

Composting toilet Public composting toilet facility on E6 highway in Sweden A composting toilet is a dry toilet that uses a predominantly aerobic processing system that treats excreta, typically with no water or small volumes of flush water, via composting or managed aerobic decomposition.[1] Composting toilets may be used as an alternative to flush toilets in situations where there is no suitable water supply or waste treatment facility available or to capture nutrients in human excreta as humanure. They are in use in many of the roadside facilities in Sweden and in national parks in both the United States and the United Kingdom. The human excrement is normally mixed with sawdust, coconut coir or peat moss to support aerobic processing, absorb liquids, and to reduce the odor.

Data Farming: Demonstrating the Benefits of Urban Agriculture [INFOGRAPHIC] Transforming underutilized land into productive urban farms was one of the many topics which were presented at the recent Kansas City Design Week. Jerome Chou, past Director of Programs at the Design Trust for Public Space, presented his unique experience with the implementation of the Five Boroughs Farm in New York City and the impact that urban agriculture can have on low-income areas of a city. Chou pointed out in his presentation that having the land available for an urban farm is only half of the battle. The other half involves changing local zoning laws, influencing political opinion, garnering economic support, and proving the project will have a net benefit to a community. These challenges where not unique to just New York City but also to Kansas City’s 18th and Broadway Urban Farm which was also presented at Kansas City Design Week.

17 Apart: Growing Celery Indoors: Never Buy Celery Again Remember when we tested and shared how to grow onions indefinitely last week? Well, at the same time, we've been testing out another little indoor gardening project first gleaned from Pinterest that we're excited to share the successes of today — regrowing celery from it's base. We've figured out how to literally re-grow organic celery from the base of the bunch we bought from the store a couple weeks ago. I swear, we must have been living under a rock all these years or just not be that resourceful when it comes to food, but we're having more fun learning all these new little tips and tricks as we dive deeper into trying to grow more of our own food. Project: EARTH : Timeless Earth Solutions Note: the above video was made 3.5 years ago and will be updated in November with a more relevant and current one. Experience…. Best Technologies & Innovations in Bio-Architecture, Renewable/Radiant Energy, Food and Water Systems, Economic Systems and Social Architecture.Advanced Educational Environments, Materials, Practices and Concepts.Holistic (Gestalt) Mind, Body and Spirit Development.Sustainable Lifestyle Solutions.Integrative Wellness Services.Community grounded in Truth, Love and Integrity… true security & peace of mind.The Highest Attainable Nourishment with Vibrant “Living Foods and Water.” Community Living – Reclaiming our Heart Wisdom & Core Life Purpose By creating communities, that make it easy, affordable and rewarding to be socially and environmentally conscious, a whole shift in behaviors and culture naturally arises that fundamentally transforms the lives of people. The E.A.R.T.H.

'Debate on Science is Over, Time to Act Is Now': World Reacts to IPCC Report The new report further states that greenhouse gas emissions at or above current rates would induce changes in the oceans, ice caps, glaciers, the biosphere, and other components of the climate system. (Underlying photo: UNEP)Following the release of the IPCC's first installment of its fifth assessment report (AR5) on climate change in Stockholm on Friday, environmental groups, experts, and activists from around the world were reacting to the findings contained in the report and commenting on the implications it will or should have as the planet faces the "unprecedented" rate of global warming and the irrefutable consensus by the world's scientific community. For most, the report's findings represent only a more precise and updated affirmation of what has been known to most experts for decades.

Centre for Interactive Research on Sustainability CIRS is a space for multidisciplinary education and research, and though it’s one of the greenest buildings on earth, living within the resources and energy flow available on the site and surroundings, its goal is to become the baseline which future buildings will surpass. Rather than simply reducing its environmental impact, CIRS enriches its environment by making use of resources that would otherwise go unused. CIRS sources energy from the ground and scavenges heat from neighbouring buildings, generates electricity from the sun, obtains ventilation from the wind and harvests its water from the rain. Utilizing new technologies, CIRS also returns energy and water back to its surroundings.