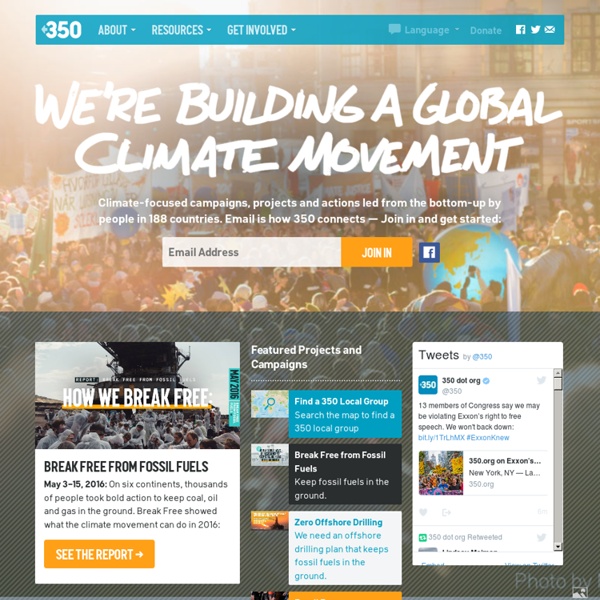 On Monday, 120 people converged on the Leard State Forest in North-West New South Wales to block construction work on the proposed Maules Creek Coal Mine. Stationing ourselves at the main entrances of the forest, we - local farmers, traditional owners and other community members, environmental campaigners, and those concerned about global warming - stopped work on the mine for the day. Five people were arrested,including 75 year old Raymond McLaren, who had never done anything like this in his life. Yesterday, the protest continued, as two activists locked themselves to a gravel truck, halting construction of the rail spur for the new mine. Responding to the calls of local community members, this weekend was a gathering of people from all around the country to stop this mine. From young to old and coming from cities as far as Adelaide and Brisbane, we came together to protect our environment, our community, and our climate.

Bill McKibben - Global Warming's Terrifying New Math If the pictures of those towering wildfires in Colorado haven't convinced you, or the size of your AC bill this summer, here are some hard numbers about climate change: June broke or tied 3,215 high-temperature records across the United States. That followed the warmest May on record for the Northern Hemisphere – the 327th consecutive month in which the temperature of the entire globe exceeded the 20th-century average, the odds of which occurring by simple chance were 3.7 x 10-99, a number considerably larger than the number of stars in the universe. Meteorologists reported that this spring was the warmest ever recorded for our nation – in fact, it crushed the old record by so much that it represented the "largest temperature departure from average of any season on record." The same week, Saudi authorities reported that it had rained in Mecca despite a temperature of 109 degrees, the hottest downpour in the planet's history. Not that our leaders seemed to notice.

Saul Griffith: Climate Change Recalculated Good evening. How are we for signal, very good, I am Stewart Brand from the Long Now Foundation. You maybe wonder what this Twitter thing is about. This data, it turns out is helpful helpful for funders of Long Now and of these talks. Microsoft Answer Desk: PC & Software Help At Microsoft, help is available all day, every day – and in any way that suits you best. Because we know that accidents happen, glitches occur and problems can't often wait to be resolved until regular business hours, the Microsoft Answer Desk is staffed 24 hours a day, seven days a week by people who know our products better than anyone else. In order to help you get the information you need to get your device back on track, get your software up and running, or get buying advice, we offer live chat, email, telephonic and in-store assistance. This way, you can contact us on your schedule and spend the rest of your day focusing on the things that matter most.

Greta Thunberg, the Fifteen-Year-Old Climate Activist Who Is Demanding a New Kind of Politics Sometimes the world makes so little sense that the only thing to do is engage in civil disobedience—even in a country as attached to its rules and regulations as Sweden is. Fifteen-year-old Greta Thunberg has been protesting for more than a month. Before the country’s parliamentary election on September 9th, she went on strike and sat on the steps of the parliament building, in Stockholm, every day during school hours for three weeks. Since the election, she has returned to school for four days a week; she now spends her Fridays on the steps of parliament.

How farmers can help fight climate change The other week, I spent some time interviewing several business leaders for the North Carolina Sustainability CEnter, asking them about their reactions to President Obama's climate speach. Their responses were decidedly mixed, but one discussion stayed with me. When I asked Charles Sydnor, the owner of Braeburn Farm, about the urgency of climate policy for his industry—he had this to say:

Clifford Pier : A "Fight" Between Johnston And Clifford ~ Merlion Wayfarer's Walking Singapore Marina Bay & Singapore River South, Singapore May 2013 Measuring 240 feet long by 110 feet wide, Clifford Pier was built to replace Johnston's Pier (1854-1933) which was situated opposite Fullerton Square (Read "Fullerton Heritage - Fullerton Square"). Jeremy Corbyn appoints Labour’s first shadow minister for climate justice Jeremy Corbyn has created a new role on Labour’s front bench, appointing a shadow minister for climate justice to liaise with young popular movements such as Extinction Rebellion. The move comes after the UK parliament became the first in the world to declare an “environment and climate emergency” – a symbolic motion recognising the need to combat the climate crisis. Earlier this year, Mr Corbyn and government ministers also met with the 16-year-old climate activist Greta Thunberg and at the time he pledged to continue “conversations with youth climate strikers”. We’ll tell you what’s true. You can form your own view.