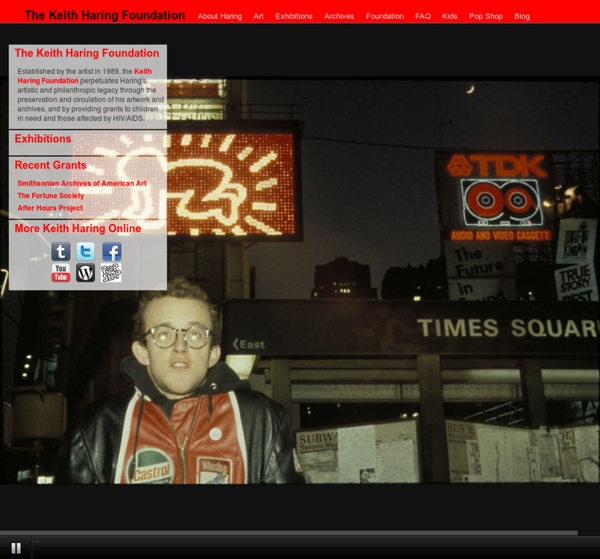 Artist's Physical Gestures Produce Beautiful Charcoal Drawings Using just her body and a piece of charcoal, New Orleans-based performance artist Heather Hansen bends and twists in fluid motions across the surface of paper to create beautifully rough symmetrical shapes and patterns. Her captivating performances involve dance-like movements that are just as much the main focus as the final, large-scale drawings. Watching her process is a mesmerizing experience where lines emerge from her many natural, physical gestures. Without hesitation, she repeats her movements and smears the lines together into the final, unpredictable works.

Banksy – Jerusalem Wall « hardcore as something more beautiful Old man: „You paint the wall, you make it look beautiful.“ Me:“Thanks.“ Old man:“We don‘t want it to be beautiful, we hate this wall, go home!“ Sharpie Markers Official Blog Sharpie King, a.k.a. Immy Mellin, hard at work on his next Sharpie creation His name is Immy Mellin but artists and fans alike know him as the Sharpie King. His Sharpie marker moniker is the result of his passionate use of Sharpie markers in all of his art. We found Immy on Flickr.com and were absolutely amazed at just what can be done with Sharpie markers – his work is nothing short of artistic genius!

Meet the Man Who Wants to Mine the Moon — Naveen Jain wants to privatize the moon by exploring its precious minerals. — His company, which calls itself MoonEx, was awarded a contract as part of NASA's $10 million Innovative Lunar Demonstration Data. The moon is made of far more valuable stuff than green cheese. And one man wants to capitalize on that fact.

Impermanent Sand Paintings by Andres Amador San Francisco-area landscape artist Andreas Amador etches massive sand drawings onto beaches during full moons when his canvas reaches its largest potential. Using only a rake and often several helpers the geometric and organic shapes are slowly carved into the sand, often interacting with the physical topography like the stones in a zen garden. The works exist for only a few moments, just long enough to snap a few photographs before being completely engulfed by the encroaching tide. Amador has also collaborated on a number of killer marriage proposals, the question popped as part of his elaborate drawings viewable from an elevated distance. You can see much more on his website, and he also sells prints.

Mark Jenkins // City Besançon Rome Rio de Janeiro Tudela Extreme Knitting- Looped madness Loop after loop Agata Oleksiak crochets anything that enters her bubble; even people! Olek was born in Poland and graduated with a degree in Cultural Studies, she moved away from the ” industrial, close-minded Silesia,” a region in Poland, when she rediscovered her crochet abilities while in New York- where she’s been knitting art ever since. She has stated that she chose to crochet as a means to do two things at once: to watch movies and make some great art. She has been quoted saying, “Life and art are inseparable.

Glam Rocker : Christian Montenegro All images © copyright 2009 Christian Montenegro Ediciones Malevo Estampa - Fine Art PrintsBuy it My Yahoo! - Waterfox AOL and Yahoo have come together as Oath, a part of Verizon. By continuing to use our services, you agree to Oath’s new Terms of Service and Privacy Policy. Below is a summary of some of the key updates. How we collect and use data. We’ve updated some of the ways we collect and analyze user data. Paul Klein (art activist) Paul Klein (born 1946) is an American art dealer. He was chosen 2006 Man of the Year by the Chicago Society of Artists.[1] Klein works for the Briddge Group providing financial and legacy planning for collectors. He was the first executive director of the Chicago ART Project.[2] From 2004-2008 he was the art curator for the 2,500,000-square-foot (230,000 m2) expansion of McCormick Place,[3] the editor of ArtLetter,[1] and wrote for "Chicago Life" which was distributed regionally in the New York Times.[citation needed]

Guy Secretly Shoots Subway Passengers As 16th-Century Paintings You can find all sorts of people on the London Underground. You won’t however see anybody from the 16th century. Not unless you’re Matt Crabtree that is. He sees them all the time. Take a look at his pictures to see what we mean. Michael De Feo Best known in the street art movement for his ubiquitous and iconic flower image, artist Michael De Feo has been creating illegal works on the streets for more than 20 years in more than 40 international cities including New York, Los Angeles, Miami, Cabo San Lucas, Amsterdam, Paris, Venice, Buenos Aires, and Hong Kong. Although his flower is the only image he repeats in his street art, Michael has created a variety of other works in the streets. De Feo's current studio work reflects his ongoing interest in Dutch 17th century flower still life painting and Vanitas painting. Michael's studio paintings frequently incorporate geographical maps as a metaphor for painting the entire globe. Michael's work has appeared in countless media outlets, including three covers of New York Magazine's "Reasons to Love New York" issues, The New York Times, The London Sunday Times and TIME Magazine. Download Michael's complete C.V.

François Barraud François-Emile Barraud François Barraud (14 November 1899 – 11 September 1934) was a Swiss painter. Barraud was the eldest of four brothers who all painted or sculpted at various points in their lives.[The brothers, François, Aimé, Aurèle and Charles, were largely self-taught artists having been raised as professional plasterers and house painters. Barraud attended evening classes at the local art school in 1911 together with his brothers.

Waterfox Drawspace Pro Lessons are designed for artists of all levels and educators, and are logically organized into resources and activities. Eventually, all lessons and E-books authored by Brenda Hoddinott will be available here: four to eight brand new lessons and newly-revised older lessons are being added every month! Upgrade Now: Download all 310 lessons and 4 e-books! Try for Free: Download lessons marked as "Free"! 1.1.R1 Glossary Of Art Terms Definitions of art-related terms used in the resources and activities of Drawspace Curriculum (updated February 2013)