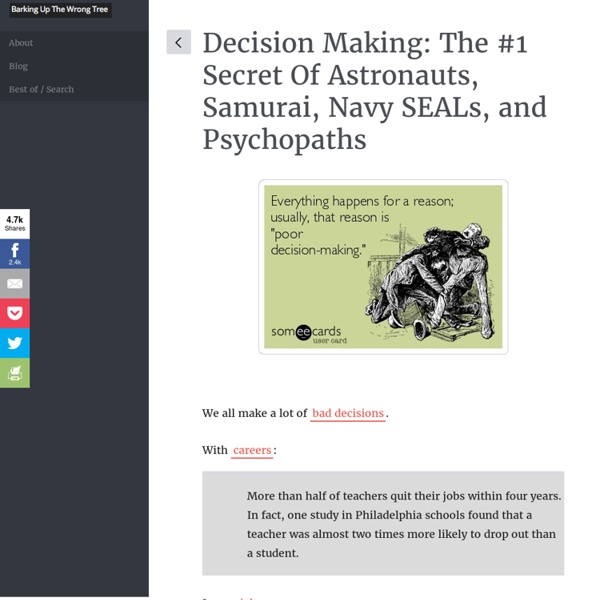 We all make a lot of bad decisions. With careers: More than half of teachers quit their jobs within four years. In fact, one study in Philadelphia schools found that a teacher was almost two times more likely to drop out than a student. In our jobs: A study showed that when doctors reckoned themselves “completely certain” about a diagnosis, they were wrong 40% of the time. And in our personal lives: …an estimated 61,535 tattoos were reversed in the United States in 2009. So how can we all make better decisions? It’s “arousal control.” That’s a fancy word for keeping a cool head. In their book, Decisive, Chip and Dan Heath identify short term emotion as one of the primary causes of bad decisions. Astronauts, samurai, Navy SEALs, and psychopaths. 150 Miles Above The Earth Is No Place For Panic It’s the 1960’s and NASA is going to send people to the moon for the first time. How do you make sure astronauts don’t freak out in the cold darkness of space where there’s no help? You’re NASA. No. Nope. Related:  Decision Making • Interesting Reads

untitled Computer Science Reveals 4 Secrets That Will Make You Happy Where do you go for most of your answers these days? Google. And it’s no surprise that Google’s a company full of engineers. And computer software engineers have developed methods — algorithms — to solve some of the most insanely complex problems out there. Turns out you can get some amazing solutions. Okay, time to update the software in your brain. How To Minimize Regret And Maximize Happiness Computer scientists often use a framework called “explore/exploit.” In life, exploration minimizes regret. Exploring is fun. And exploiting what you’ve learned can provide big returns. No need to do heavy math. From Algorithms to Live By: The Computer Science of Human Decisions: When balancing favorite experiences and new ones, nothing matters as much as the interval over which we plan to enjoy them. So if you’ve just moved to a new city, try a different restaurant every night for a while. And it also explains why older people can be so set in their ways. How To Organize Your Office Sum Up Ouch.

How To Go From Dreaming To Doing: 4 Steps To Motivation You have stuff you know you should be doing. But it doesn’t get done. You need to go from dreaming to doing — but it’s hard. You want to accomplish more at work, hit the gym, get a new job or study harder at school… but it’s not happening. I’ve talked about strategies to make challenges easier like the 20 second rule. What gets you going when you’re not motivated to reach those longer term goals? There’s a solution that can help you not only make change easier, but boost motivation. Yes, WOOP. WishOutcomeObstaclePlan Can a method with the silliest name in social science really work? People who say they want to exercise more and use the WOOP method do dramatically better: How does it work? The first step is wishing. Here’s how to do it right. 1) Wish (But Don’t Stop There) Everything starts with a wish. Having a positive attitude is pretty much essential because a negative attitude makes us more likely to quit — or to never start in the first place. Why? Want to lose weight? 4) Make A Plan Tags:

untitled This Is How To Make Good Decisions Life would be a lot easier if we just knew how to make good decisions. Research shows we all make a lot of bad ones. With careers: More than half of teachers quit their jobs within four years. In fact, one study in Philadelphia schools found that a teacher was almost two times more likely to drop out than a student. In our jobs: A study showed that when doctors reckoned themselves “completely certain” about a diagnosis, they were wrong 40% of the time. And in our personal lives: …an estimated 61,535 tattoos were reversed in the United States in 2009. We get a lot of sketchy tips based on unreliable sources. For starters, you might think you would be better off if you just had more information about the choice at hand. And you’d be wrong… You don’t need more info. In the past 20 years we went from a world where information was difficult to come by to a world where we can’t get away from the stuff. Solution? Via To Sell Is Human: The Surprising Truth About Moving Others: Feelings Are Your Friends

SKILLS & TOOLS — Quirky Blog Research. It’s the hero of any great Quirky submission. A thorough analysis of your invention’s competitive landscape has three key benefits: 1. It reveals whether or not your invention already exists. It’s no fun spending a lot of time coming up with a new product idea, only to find out that someone beat you to it. 2. 3. Now that we understand why doing your research before submitting is a good thing, let’s get into some best practices. Google should be your first stop right after you’ve thought up an invention. - Use web friendly words. - Try synonyms. - Keep searches short and sweet. - Use quotes to lock a phrase. - Search within a site. - Don’t forget “images” and “shopping.” Find more Google search tips here. Couldn’t find your invention online? - Amazon - international eCommerce site; largest in the United States - Kickstarter - global crowdfunding platform - Indiegogo - another international crowdfunding site - This is why I’m broke - online magazine - Skymall - shopping magazine

untitled Decision-making Sample flowchart representing the decision process to add a new article to Wikipedia. Decision-making can be regarded as the cognitive process resulting in the selection of a belief or a course of action among several alternative possibilities. Every decision-making process produces a final choice that may or may not prompt action. Decision-making is the study of identifying and choosing alternatives based on the values and preferences of the decision maker. Overview[edit] Edit human performance with regard to decisions has been the subject of active research from several perspectives: Psychological: examining individual decisions in the context of a set of needs, preferences and values the individual has or seeks.Cognitive: the decision-making process regarded as a continuous process integrated in the interaction with the environment.Normative: the analysis of individual decisions concerned with the logic of decision-making and rationality and the invariant choice it leads to.[1]

The Elegant, Effective Election Data Visualization That Is Thankfully Not A Map : MapBrief™ We occasionally field the suggestion, nay, insinuation, that our posture here at Mapbrief is unduly critical. Whether it be pie charts, contiguous cartograms, or untucked shirts, our opinions are admittedly fixed. So much so that you might say “dogma”; we say “consistency”. But in the spirit of staying positive, let’s admire this recent graphic from the Washington Post detailing campaign contributions: Note the five dimensions of information: 1) donor name, 2) total donation, 3) state of Senate race, 4) receiving political party, and 5) relative size of state-level donation. What makes me especially happy is that I can so clearly picture what this graphic could have been: a map of the US with the 11 states having some choropleth ramp (39 states of “no data”!) The horror. Moral of the story: sometimes the best map is no map. Great job by the Post team. —Brian Timoney