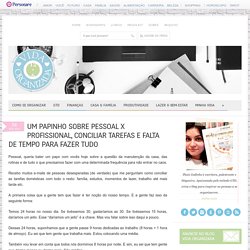 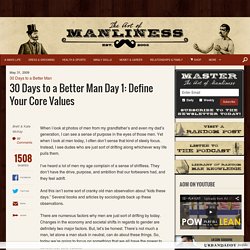 Yet when I look at men today, I often don’t sense that kind of steely focus. Instead, I see dudes who are just sort of drifting along whichever way life pulls them. I’ve heard a lot of men my age complain of a sense of shiftless. They don’t have the drive, purpose, and ambition that our forbearers had, and they feel adrift. And this isn’t some sort of cranky old man observation about “kids these days.” How to Create a Life Plan in 5 Easy Steps. The craftsman is an archetype of manliness that has been with us for millennia. 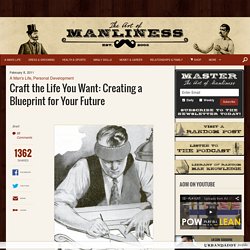 We admire his independence, his work ethic, and his unwavering sense of purpose. We envy the way he personally shapes and creates the fruits of his labor. While not many of us will ever make a living hammering horseshoes or chiseling wood, we are all artisans in a way, because we are all charged with crafting our own lives. Each man must take an active role in shaping his future. He must gain entry to the Guild of Greatness. Ask Yourself These Two Questions to Prioritize Your Tasks. Imagine Three Different Futures to Help You Make Better Decisions. If You Want to Follow Your Dreams, You'll Have to Choose a Focus. How to Prioritize When Everything Is Important. You know that sinking feeling you have when there's too much on your plate? 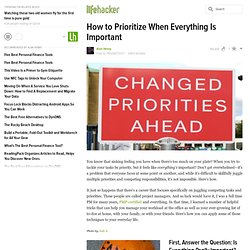 When you try to tackle your tasks by priority, but it feels like everything's important? Don't get overwhelmed—it's a problem that everyone faces at some point or another, and while it's difficult to skillfully juggle multiple priorities and competing responsibilities, it's not impossible. Here's how. P It just so happens that there's a career that focuses specifically on juggling competing tasks and priorities: These people are called project managers. Photo by Josh S.P First, Answer the Question: Is Everything Really Important? Even if everything on your plate is supposed to be equally important, you still need a way to break down which ones you spend your time on, and how you slice up your time.

Photo by Lisa Stevens.P Grill the boss. Get OrganizedP The goal of your system, whichever you select, is to take away the need for you to waste time deciding what to work on next, even when you have a lot on your plate. Dwight Eisenhower's Best Productivity Tricks. The Eisenhower Decision Matrix: How to Distinguish Between Urgent and Important Tasks.

Tackle Life-Changing Decisions by Thinking of Your Goals Like a Game. 5 Expert-Approved Ways to Make Smarter Decisions. Humans may have impressive minds capable of great feats, but experts have known for a while that our decision-making processes are flawed — and often in predictable ways. 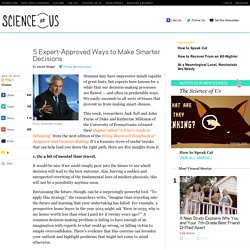 We easily succumb to all sorts of biases that prevent us from making smart choices. This week, researchers Jack Soll and John Payne of Duke and Katherine Milkman of the University of Pennsylvania released their chapter called “A User's Guide to Debiasing” from the next edition of the Wiley-Blackwell Handbook of Judgment and Decision Making.

It’s a treasure trove of useful tweaks that can help lead you down the right path. Here are five insights from it. 1. It would be nice if we could simply peer into the future to see which decision will lead to the best outcome. Envisioning the future, though, can be a surprisingly powerful tool. 2. There’s no such thing as evaluating a decision “objectively” — human beings are and always will be tugged this way and that by various irrelevant factors. 3. 4. 5. Use the 10-10-10 Rule to Make Better Decisions. Think of Decisions as Experiments and Start Making Better Ones. Four Tricks to Help You Make Any Difficult Decision. Go “Back to the Future” to Make Better Decisions.