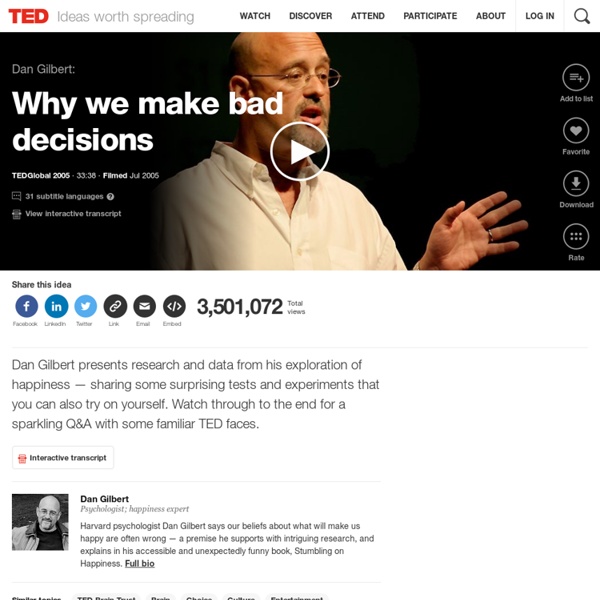 8 tips to make your life more surprising — from a “Surprisologist” A closeup of Tania Luna, with glow stick. Photo: James Duncan Davidson In today’s talk, Tania Luna shares her experience of immigrating to the United States from Ukraine as a little girl. Perfectly happy with her family’s outhouse and with chewing a single piece of Bazooka gum for a week, Luna found herself blown away by the wonders of her new country. From pizza to pennies to pit-bulls, Luna’s moving story reminds us to appreciate the unexpected joys of daily life and to embrace uncertainty. This philosophy translates directly to Luna’s day job, as a Surprisologist. Commit to the mindset and process of surprise. Luna believes we can all be surprisologists. Tania Luna leads a TED audience in a glowstick dance, during a talk given a year prior to the one posted today.

7 talks on how we make choices | Playlist Now playing Over the years, research has shown a counterintuitive fact about human nature: That sometimes, having too much choice makes us less happy. This may even be true when it comes to medical treatment. Baba Shiv shares a fascinating study that measures why choice opens the door to doubt, and suggests that ceding control — especially on life-or-death decisions — may be the best thing for us. (Filmed at TEDxStanford.)

TAILOPEZ.COM The 'no mistake' fast track is what we all want to be on. Because as the Dutch say, "We are too soon old, and too late smart." Steve Jobs was right when he said, "I didn't want to be the richest man in the graveyard." It's not enough to just be successful. It doesn’t matter if you are 18 years old or 80 years old, the arrow of time moves forward. Hall of Fame pro basketball player Charles Barkley was right, "Father time is undefeated." Imagine if you could have back the years you have wasted on a bad marriage or dating the wrong person; recover the youth you lost to being overweight and unhealthy; get back the money you lost on bad investments; take back the lost decades spent in the wrong career; find lasting friendships instead of having squandered time around people who ended up betraying you in the end. The greatest wish of every human is to have their wasted years back. But time moves forward. Now he says he was mistaken. You and I are left with no way to undo our mistakes.

How to help your doctor give you better care Upstreamists like me — and we can be doctors, nurses or other clinicians — know that asthma can start in the air around us. We know that ailments such as depression, anxiety and high blood pressure can arise from chronically stressful conditions at work and home. We see how policies that deny opportunity, fairness and justice can be reflected in patients’ faces as well as in their DNA. There aren’t nearly enough of these pioneers working in health care today, but our ranks are slowly growing. 1. Create a list of the potentially unhealthy issues in your environment. Some of these problems you might be able to fix yourself. 2. There’s a reason why billions of dollars are spent each year by pharmaceutical and medical device companies on marketing that urges us to “ask your doctor about [insert brand-name drug or procedure here].” So, next time you visit your doctor, try asking: “Doctor, do you consider yourself an upstreamist?” 3. Not a gadgethead? 4. You can conduct your own assessment.

Tough Choices: How the poor spend money “It’s stress,” Halima Tinson says as she paces back and forth in front of a San Diego preschool. “But I want my husband to go to school. Because I know when he finishes, I won’t have to worry anymore.” Tinson is trying to get her three-year-old twins signed up for the Head Start program to free up time for her husband. The Tinson-Ricardos are just one of thousands of poor families in San Diego. Barely scraping by in deep poverty Halima Tinson had to take three buses to get from her job across town to the preschool in the City Heights neighborhood of San Diego. “I just got my hours cut because my boss said I don’t have a car. “There’d be some times when we’d go without water for a whole week, maybe two weeks. Ricardo just climbed that same hill to get groceries for the family. But looking around the Tinson-Ricardo’s home, there are some signs of better times… or bad decisions. The Tinson-Ricardos have four kids living at home: Rickey Jr., 7, Isaiah, 5, Adora, 3, and Jonah, 3.

A Homeless Man and His BlackBerry Just becomes he doesn't have a home mean he doesn't deserve a life. I could tell he was different the moment he walked in the coffee shop. It wasn’t his appearance. It was how he moved: warily, shoulders hunched over and eyes darting. He ordered a coffee, carefully counting out coins on the counter. Did someone have some cash jobs for him? Bert isn’t unsheltered. He made it clear: he hadn’t given up. It wasn’t easy to engage him in conversation. He made a joke about people acting as if poverty was an infectious disease. His phone, then, functions as an important conduit. E-mail and text is especially important. Ironically, all this is easier to manage over text and e-mail than the phone. Despite nearly everyone owning a cell phone, we think of them as luxuries, especially as data plans approach $100 a month. Even the most progressive areas of the country can show a certain callousness to what poverty should look and feel like. Yes — phones. I Want More Stuff Like This! Published In: