Trying Not to Try: How to Cultivate the Paradoxical Art of Spontaneity Through the Chinese Concept of Wu-Wei 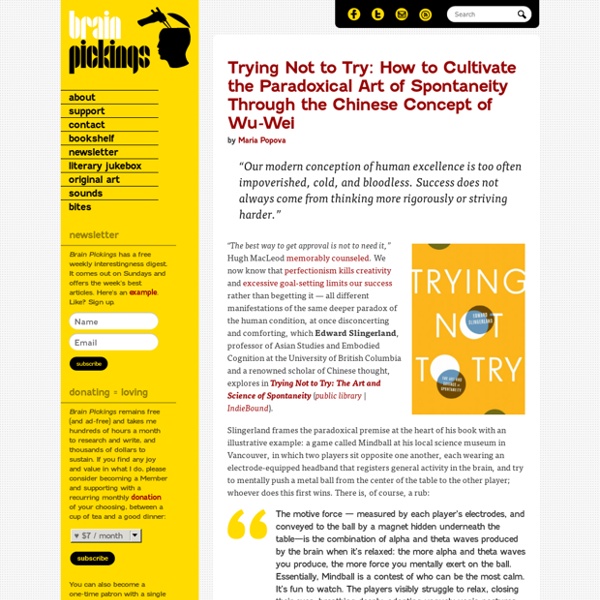 by Maria Popova “Our modern conception of human excellence is too often impoverished, cold, and bloodless. Success does not always come from thinking more rigorously or striving harder.” “The best way to get approval is not to need it,” Hugh MacLeod memorably counseled. We now know that perfectionism kills creativity and excessive goal-setting limits our success rather than begetting it — all different manifestations of the same deeper paradox of the human condition, at once disconcerting and comforting, which Edward Slingerland, professor of Asian Studies and Embodied Cognition at the University of British Columbia and a renowned scholar of Chinese thought, explores in Trying Not to Try: The Art and Science of Spontaneity (public library | IndieBound). Our lives, Slingerland argues, are often like “a massive game of Mindball,” when we find ourselves continually caught in this loop of trying so hard that we stymie our own efforts. Art by Austin Kleon from 'Show Your Work.' Share on Tumblr

3 Things Mindfulness is Not. ~ Ruth Lera Via Ruth Leraon Apr 18, 2014 The experience of practicing mindfulness or meditation is one that is most often beyond words. There is an elusive quality to touching into the moment—and only this moment—that is hard to describe, perhaps impossible. However, in our North American perfectionist culture, which is obsessed with hating ourselves and constantly striving to be better, the word mindfulness has been usurped to mean many different things. 1. How often have I heard people make a simple mistake such as stubbing their toe or writing the wrong number on a cheque; some little, normal human slip-up that we all make each and every day, and what do they say. “Through continual practice we find out how to cross over the boundary between being stuck and waking up. We don’t like making mistakes, but it is a act of courage to choose to be mindful of all experiences when they occur, even the ones we categorize as mistakes. 2. “Argh, I forgot my keys; that wasn’t very mindful of me.” 3.

Motivation, Bonuses and Open Source | Psygrammer Let’s start with a few quick observations on money and motivation. Bonuses can be an easy and expensive way to demotivate staff just as to motivate them.Experiments consistently show that financial motivation can actually reduce performance particularly on tasks that require thinking … like programming.If money were the sole motivator then open source would not have transformed the world and society would lose the massive contributions made by other volunteers.But equally … unfair rewards and low salaries can switch off the mind of your team. So why do many organizations persist with financial bonuses as their core incentive? What’s the right balance of rewards? The surprising truth about motivation Dan Pink has done some entertaining, enlightening videos around the topic of motivation. He makes the point that research by psychologists and economists demonstrates consistently that financial incentives can be effective in improving performance for physical, mechanical and procedural tasks.

Wuwei: No Trying, No Doing In a famous story from ancient Chinese philosophy, Butcher Ding has been called upon to play his part in a traditional religious ceremony. The ritual, to consecrate a newly cast bronze bell, requires the butcher to sacrifice an ox in a public space, with the ruler and a large crowd looking on. The still smoking bell is brought fresh from the foundry and cooled with the blood of the sacrificial animal — a procedure that demands precise timing and perfectly smooth execution. Butcher Ding is up to the task, dismembering the massive animal with effortless grace: “At every touch of his hand, every bending of his shoulder, every step of his feet, every thrust of his knee — swish! When I first began cutting up oxen, all I could see was the ox itself. The result is that Butcher Ding is not so much cutting up the ox as releasing its constituent parts, letting the razor-sharp edge of his cleaver move through the spaces between the bones and ligaments without encountering the slightest resistance.

Love Undetectable: Andrew Sullivan on Why Friendship Is a Greater Gift Than Romantic Love by Maria Popova Reflections on the cornerstone of our flourishing. “A principal fruit of friendship,” Francis Bacon observed, “is the ease and discharge of the fulness and swellings of the heart, which passions of all kinds do cause and induce.” Thoreau would “sometimes awake in the night and think of friendship and its possibilities.” St. Sullivan writes: For me, friendship has always been the most accessible of relationships — certainly far more so than romantic love. He argues that our world has failed to give friendship its due as “a critical social institution, as an ennobling moral experience, as an immensely delicate but essential interplay of the virtues required to sustain a fully realized human being.” You can tell how strong the friendship is by the silence that envelops it. Reflecting on the tragedy of loss that prompted his meditation, Sullivan adds: A part of this reticence is reflected in the moments when friendship is appreciated. Love is a supremely jealous thing.

The Psychology of Trust in Life, Learning, and Love by Maria Popova The science of why tit-for-tat isn’t the best strategy for cooperation and why you should hear out your hunches. “When you trust people to help you, they often do,” Amanda Palmer asserted in her beautiful meditation on the art of asking without shame. But what does it really mean to “trust,” and perhaps more importantly, how can we live with the potential heartbreak that lurks in the gap between “often” and “always”? That’s precisely what psychologist David DeSteno, director of Northeastern University’s Social Emotions Lab, explores in The Truth About Trust: How It Determines Success in Life, Love, Learning, and More (public library). DeSteno, who has previously studied the osmosis of good and evil in all of us and the psychology of compassion and resilience, argues that matters of trust occupy an enormous amount of our mental energies and influence, directly or indirectly, practically every aspect of our everyday lives. The short answer is that we have to.

Banned TED Talk: Graham Hancock – The War on Consciousness Yet another TED talk banned by the TED community due to the challenge it poses to mainstream science. The talk was done at a TEDx conference and aired on the TEDx YouTube channel for a period of time before it was removed due to its content. After personally listening to this talk it is quite clear why it was censored. In my opinion Graham makes some strong points about psychedelics and I agree with him that we should all have the right to explore them as we choose. We Need Your Help! We're creating a conscious alternative news network that we feel the world needs, and we need your help! Like you, we are tired of corporate media that's politically driven and one sided. This is how we can take things to the next level! Dont Follow Your Passion, Follow Your Effort I hear it all the time from people. “I’m passionate about it.” “I’m not going to quit, It’s my passion”. Or I hear it as advice to students and others “Follow your passion”. What a bunch of BS. Why ? Think about all the things you have been passionate about in your life. If you really want to know where you destiny lies, look at where you apply your time. Time is the most valuable asset you don’t own. Let me make this as clear as possible 1. 2. 3. 4. Don’t follow your passions, follow your effort.

7 Rules for Maximizing Your Creative Output After my last article on experiencing creativity, there was a question in the resulting forum discussion about how to enter this highly creative flow state, the state where you lose all sense of time, your ego vanishes, and you become one with the task in front of you. Is this peak creative state a rare chance event, or can it be achieved consistently? For me the creative flow state is a common occurrence. I usually enter this state several times a week, staying with it for hours at a time. I’m able to routinely enjoy the flow state as long as I ensure the right conditions, which I’ll share with you in a moment. My first memories of habitually entering this flow state date back to the early 80s when I was learning BASIC programming. For most of my life I took these creative spurts for granted. Here are my 7 rules for optimizing the highly creative flow state: 1. To enter the flow state, you need a goal. Don’t overqualify your purpose. 2. 3. 4. I work best in a private, quiet environment.