ECJ Says Safe Harbor Is Not So Safe. Posted by Tara Taubman-Bassirian on October 8, 2015. 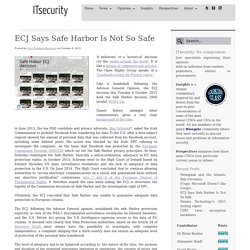 ‘A milestone’ or a ‘historical’ decision cry the media around the world. It is like a deluge of comments and articles. 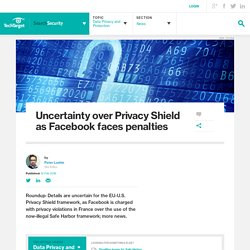 Privacy Shield framework is still up in the air this week. Since the agreement for privacy protection on transatlantic data flows was announced on Feb. 2, transfers using the old Safe Harbor mechanisms could be deemed illegal and subject to enforcement penalties on privacy grounds. But uncertainty remains, as details of the new framework have yet to be worked out.

Some parts of the agreement are beginning to fall into place. On the U.S. side, the Judicial Redress Act, which would give non-U.S. citizens access to U.S. courts for cases involving data privacy -- a key component of the Privacy Shield agreement -- awaits President Barack Obama's signature. Hamburg Data Protection Watchdog Fines International Companies For Illegal Data Transfers. 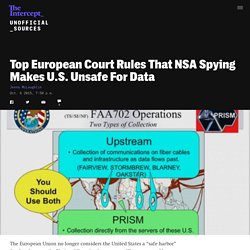 The EU’s highest court, the Court of Justice, declared on Tuesday that an international commercial data-sharing agreement allowing U.S. companies free-flowing access to large amounts of European citizens’ data was no longer valid. As Snowden revealed in 2013, the NSA has been interpreting section 702 of the Foreign Intelligence Surveillance Act as giving it license to intercept Internet and telephone communications in and out of the U.S. on a massive scale. That is known as “Upstream” collection. The NSA is not required to demonstrate probable cause of a crime before a court or judge before examining the data. The ruling was seen as posing a major obstacle for U.S. What’s not yet clear is what they can do about it.

Sen. Safe Harbour: Key Aspects of the ECJ Ruling. Today, the Court of Justice of the European Union (ECJ) declared that the Safe Harbour agreement which allowed the movement of digital data between the EU and the US was invalid. 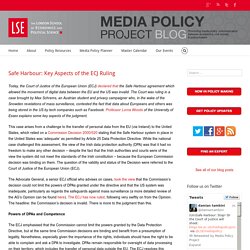 The Court was ruling in a case brought by Max Schrems, an Austrian student and privacy campaigner who, in the wake of the Snowden revelations of mass surveillance, contested the fact that data about Europeans and others was being stored in the US by tech companies such as Facebook. Professor Lorna Woods of the University of Essex explains some key aspects of the judgment. Public Affairs 2.0 » Internet Commerce is put in question by today’s European Court of Justice ruling. October 6, 2015 What this will mean for both US and EU companies Today thousands of potential jobs, billions in revenues and any cooperation such as medical research is put into question in a landmark decision by the Court of Justice of the European Union (CJEU) in Luxembourg. 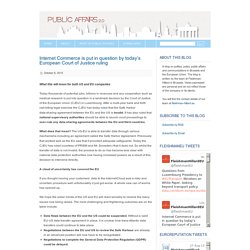 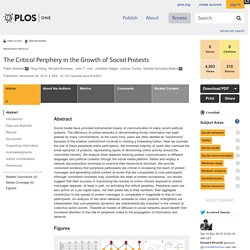 Academy of European Law > International Data Transfers after the Invalidation of the Safe Harbour Decision. Objective. 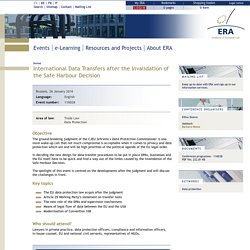 See how Google modifies the results for a #safeharbor search. The @Gizmondo article is good. Making Privacy a Reality: The Safe Harbor Judgment and Its Consequences for US Surveillance Reform. Earlier this month, the Grand Chamber of the Court of Justice of the European Union (CJEU) issued its judgment in Schrems v. 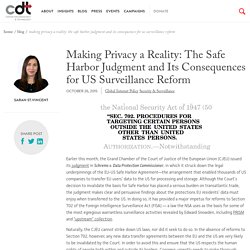 Data Protection Commissioner, in which it struck down the legal underpinnings of the EU-US Safe Harbor Agreement—the arrangement that enabled thousands of US companies to transfer EU users’ data to the US for processing and storage. Although the Court’s decision to invalidate the basis for Safe Harbor has placed a serious burden on transatlantic trade, the judgment makes clear and persuasive findings about the protections EU residents’ data must enjoy when transferred to the US. In doing so, it has provided a major impetus for reforms to Section 702 of the Foreign Intelligence Surveillance Act (FISA) — a law the NSA uses as the basis for some of the most egregious warrantless surveillance activities revealed by Edward Snowden, including PRISM and “upstream” collection. Naturally, the CJEU cannot strike down US laws, nor did it seek to do so. BREAKING: ECtHR finds Russian surveillance system violates Art .8; risk of abuse high when States have direct access. 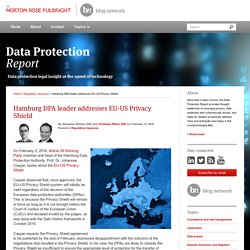 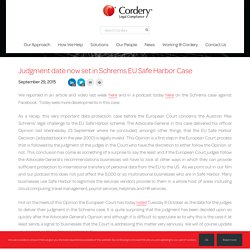 Today sees more developments in this case. Data Privacy eBulletin. The European Court of Justice (CJEU) has today ruled that the EU-US ‘safe harbor’ regime is invalid. Companies relying on safe harbor registration to transfer personal data from Europe to the US will need to adopt alternative processes or risk non-compliance with the European Data Protection Directive 1995. The decision has drawn criticism from some commentators for creating huge uncertainty, risk and cost for businesses, whilst others have welcomed the outcome as a strengthening of the privacy protections of European citizens from being subjected to mass state surveillance. About safe harbor The EU operates a comprehensive data protection regime, stipulating minimum measures for the protection and security of personal data of EU data subjects. The US data protection regime is markedly different (and widely accepted as less stringent), operating a complicated mix of federal and state legislation as well as self-regulation.

What happens now? US and EU Should Act Swiftly to Establish New Privacy Protections to Avoid Long-Term Digital Trade Disruption. Sign Up. Facebook told by Belgian court to stop tracking non-users. Image copyright Getty Images A court has given Facebook 48 hours to stop tracking people in Belgium who are not members of its social network. Facebook says it will appeal against the decision and that the order relates to a cookie it has used for five years. The cookie is installed when an internet user visits a Facebook page even if they are not members. However, the Belgian court said that the company was obliged to obtain consent to collect the information being gathered. "The judge ruled that this is personal data, which Facebook can only use if the internet user expressly gives their consent, as Belgian privacy law dictates," it said in a statement. If Facebook fails to comply, it could face a fine of up to 250,000 euros (£180,000) per day.