The Donald, The President, & the Courts

D.C. and Maryland sue President Trump, alleging breach of constitutional oath. In an unprecedented court escalation, Trump protesters could be facing decades in prison for Inauguration demonstrations. Nearly six months after Donald Trump was sworn into office, more than 200 protesters who gathered in Washington, D.C. to protest his inauguration are facing felony charges that carry sentences of 70 to 80 years. 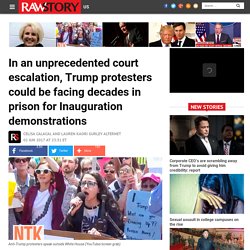 According to Al Jazeera, the 212 protesters were arrested by the Metropolitan Police Department and initially charged with felony rioting, a crime that carries a 10-year prison sentence and a $25,000 fine. On April 27, the Superior Court of the District of Columbia added additional charges that include urging to riot, conspiracy to riot and destruction of property. The possibility of long-term prison sentences for these protesters could have a chilling effect on participation in future rallies, particularly at a time of heightened levels of anti-Trump activism. While it’s unclear whether police departments will respond to large-scale political protests in a similar fashion, a dangerous precedent has been set. Trump Administration Asks Supreme Court to Restore Travel Ban. © AP Photo/Jeff Chiu Karen Shore holds up a sign outside of the 9th U.S. 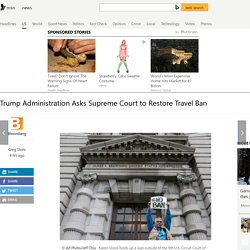 Circuit Court of Appeals in San Francisco, Tuesday, Feb. 7, 2017. Trump has been sued. Here’s why the Justice Department shouldn’t represent him. President Trump in Washington on April 11. 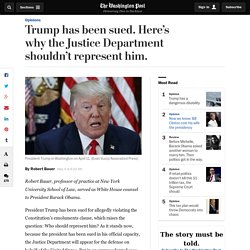 (Evan Vucci/Associated Press) By Robert Bauer By Robert Bauer May 4 at 8:20 AM Robert Bauer, professor of practice at New York University School of Law, served as White House counsel to President Barack Obama. President Trump has been sued for allegedly violating the Constitution’s emoluments clause, which raises the question: Who should represent him? As it stands now, because the president has been sued in his official capacity, the Justice Department will appear for the defense on behalf of the United States. Instead, the president should be required to retain private counsel to represent him. Judge Curiel Rules Trump Must Face Trial for Racketeering in Trump University Suit. Federal District Court Judge Gonzalo Curiel has ruled that Donald J. 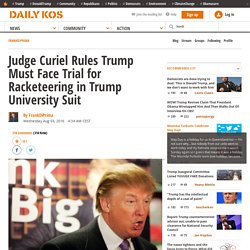 Trump, founder of Trump University, must face civil trial for fraud and racketeering under the federal Racketeer Influenced and Corrupt Organizations Act (“RICO”). Trump had moved for summary judgment in a last-ditch effort to block a class-action trial scheduled to begin right after the national election. Denying the motion, Judge Curiel ruled that there were genuine issues of material fact for trial as to whether Trump had personally committed fraud and racketeering.

If Trump loses, he is liable for three times the damages suffered by the students who paid tuition. That is the bite of the RICO statute — triple damages. Lawsuit Accusing Trump Of Inciting Rally Violence Gets Green Light From Judge. #TrumpRussia ... twisting slowly in the wind, there is a comb-over the Presidency. (March) One bit of journalistic malfeasance committed by CNN was that they rubbished the dossier’s claims on Michael Cohen without doing independent journalistic research of their own. 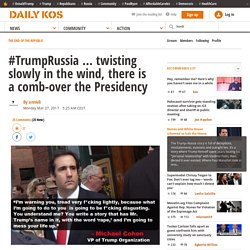 It is disappointing that American media would treat the one as proving the other. CNN spoke with reverence of a ‘second Michael Cohen’ as if that somehow meant the first one could not have left the United States. A Twitter account I now believe to be a peddler of disinformation tried to feed out the line that Cohen had an Israeli passport with a single day’s difference, explained by the time difference, and that he used this. Now, it is certainly possible that there is only one Michael Cohen who was in Prague on an Israeli passport rather than an American one. But ‘Michael Cohen’ is a common enough name. (March) The internet is tightly controlled in Russia. Who will also wind up in an Ecuadorean embassy, since they probably don’t have taco bowls. Summer Zervos says Trump groped and defamed her. Trump's lawyers say he's immune from her lawsuit.

Donald Trump is trying to get out of a lawsuit filed by a woman who says he sexually harassed her using the same excuse he’s used to wiggle away from ethics and conflict of interest concerns: I’m the president, so I’m immune. 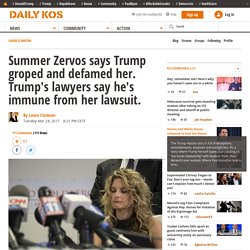 But wait, you’re saying. Paula Jones got to sue Bill Clinton—the U.S. Supreme Court even said she had the right to do that—so why wouldn’t Summer Zervos get to sue Trump for defamation? The argument is that Clinton v. Art of the deal: Flynn lied about talking to Russians about sanctions before Trump took office. Ethics watchdog offers to help Nordstrom sue Trump under California Unfair Competition Law. Trump Escalates Attack on Federal Judges Who Dare Delay and Question His Travel Ban from Muslim Countries. Photo Credit: www.whitehouse.gov. 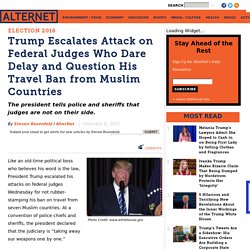 Appeals Court Judges Play Hardball Over Trump Ban. Lawyers for the federal government and the states of Washington and Minnesota squared off Tuesday over the president’s suspended executive order—in a fight observers say is likely headed to the Supreme Court. 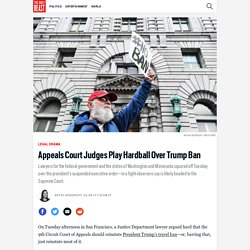 On Tuesday afternoon in San Francisco, a Justice Department lawyer argued hard that the 9th Circuit Court of Appeals should reinstate President Trump’s travel ban—or, barring that, just reinstate most of it. It was the latest court skirmish over Trump’s most controversial move yet: an executive order banning travelers from seven majority-Muslim countries from entering the United States. And if the oral arguments that took place before the appeals court Tuesday are any indicator, it’s a legal battle that’s far from over, with stakes that are sky-high and an outcome that’s far from predetermined. This all started late in the day on Friday, Jan. 27, when the president signed the executive order and kicked off a weekend of chaos at international airports around the country.

DOJ Lawyers LITERALLY Argued That Trump Is Above The Law And Untouchable By Any Court (AUDIO) You know how white supremacists have been calling Trump their “God-Emperor?” 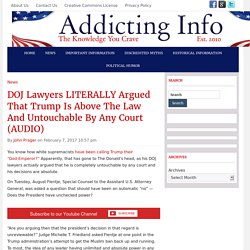 Apparently, that has gone to The Donald’s head, as his DOJ lawyers actually argued that he is completely untouchable by any court and his decisions are absolute. On Tuesday, August Flentje, Special Counsel to the Assistant U.S. Trump Administration, States Clash In Court Over Reinstating Travel Ban. Trump Lawyers To Court Reviewing Muslim Travel Ban: Stay Out Of It.