What Is FilmStruck - FilmStruck Is the New Go-To Destination for Serious Movie Buffs. On first blush, FilmStruck, the new streaming service co-produced by TCM and the Criterion Collection, seems like a moviegoer's dream come true. 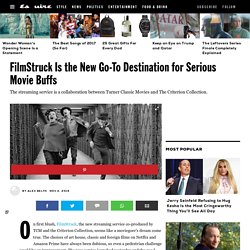 The choices of art house, classic and foreign films on Netflix and Amazon Prime have always been dubious, so even a pedestrian challenge would be an improvement. The new service launched yesterday and the good news is that while there is certainly room to grow, FilmStruck lives up to expectations, and then some, offering a carefully curated experience that will satiate your movie Jones.

Advertisement - Continue Reading Below. Can TCM and Criterion Strike it Rich With FilmStruck? If you build it, will they come? 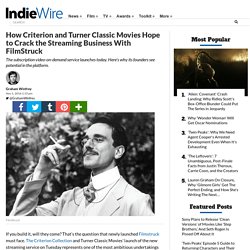 That’s the question that newly launched Filmstruck must face. The Criterion Collection and Turner Classic Movies’ launch of the new streaming service on Tuesday represents one of the most ambitious undertakings yet in the world of subscription video-on-demand entertainment. (Check out our list of five great films available on the platform now.) Starting today, FilmStruck is offering hundreds of hard-to-find, critically acclaimed movies and bonus features for $6.99 per month, playing titles from Criterion, Janus Films and Zeitgeist as well as movies from Hollywood studios like Warner Bros. (The platform was originally scheduled to go live on October 19 before issues with the sign-up process required roughly a two-week delay.) READ MORE: Inside Criterion’s Plan to Disrupt Streaming Video But will consumers who already subscribe to Netflix be willing to pay for another streaming service that’s devoted exclusively to film? Criterion president Peter Becker.

"Twin Peaks": David Lynch's journey to revive the cult TV classic, 26 years after its cancellation — Quartz. It was cookies, not cherry pie, that brought Twin Peaks back to TV. 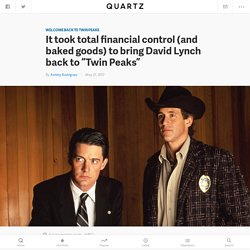 Twenty-six years ago, David Lynch’s surreal soapy drama about the murder of a prom queen in a small Pacific-Northwestern town was pulled from the air after the once promising TV show suffered a sharp decline in ratings. Tonight, on US cable channel Showtime, it will pick up where it left off all those years ago. Twin Peaks premiered on US TV on April 8, 1990 with a two-hour pilot that pulled nearly 35 million viewers, a third of the nation’s TV audience at the time, the New York Times reported (paywall). It was broadcast on ABC, one of four main terrestrial TV channels in an age when households with cable received less than 35 channels and the internet as we know it was a sci-fi dream. (Households today get more than a hundred channels, but many cord-cutters getting their entertainment via the net.) Twin Peaks: 20 Easter Eggs, References, and Callbacks You Might Have M.

Why Is ‘Twin Peaks’ So Influential? - The Atlantic. Frank Sinatra 'Trilogy' Album: Behind the Scenes of Recording. Frank Sinatra, a man not fond of interruption, was in the middle of a 1978 recording session at Warner Bros. studios in Burbank when his longtime producer Sonny Burke walked in and dared to halt the proceedings. 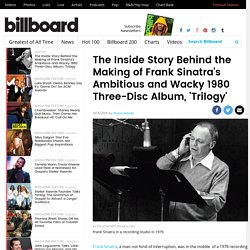 Vincent Falcone, a pianist-conductor who had worked with Sinatra for two years at that point, recalls that the singer, then 63, was recording Cy Coleman’s “I Love My Wife.” Falcone doesn’t remember if the song was intended for a new album -- Sinatra had already recorded it as a single -- but whatever the purpose of the session, Burke thought he had a better idea. Burke ushered Sinatra into the control room, and an animated conversation ensued. Lost television broadcast - Wikipedia. Lost television broadcasts are composed of mostly early television programs and series that for various reasons cannot be accounted for in personal collections or studio archives. 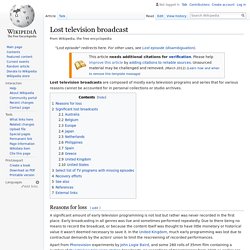 Reasons for loss[edit] A significant amount of early television programming is not lost but rather was never recorded in the first place. Early broadcasting in all genres was live and sometimes performed repeatedly. Due to there being no means to record the broadcast, or because the content itself was thought to have little monetary or historical value it wasn't deemed necessary to save it. In the United Kingdom, much early programming was lost due to contractual demands by the actors' union to limit the rescreening of recorded performances. Apart from Phonovision experiments by John Logie Baird, and some 280 rolls of 35mm film containing a number of Paul Nipkow television station broadcasts, no recordings of transmissions from 1939 or earlier are known to exist. Significant lost broadcasts[edit] Australia[edit] 10 missing-feared-lost TV shows. More lost than the ill-fated passengers of Oceanic Flight 815, many classic episodes of cult TV are sadly absent from the archives – missing, presumed wiped. 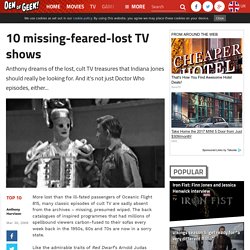 The back catalogues of inspired programmes that had millions of spellbound viewers carbon-fused to their sofas every week back in the 1950s, 60s and 70s are now in a sorry state. Like the admirable traits of Red Dwarf's Arnold Judas Rimmer, episodes are painfully noticeable by their absence, thanks to a general policy among broadcasters of junking shows to re-use valuable videotape and save space on their shelves. To us, with our shiny Blu-ray collections, it might seem like an unforgivable act of cultural vandalism but these were the days before DVDs and companies didn't see any further commercial value in hanging on to the majority of their productions – especially those in, heaven forbid, black and white.

8 important TV shows that were lost or destroyed. One TV network dumped its entire collection into the sea. 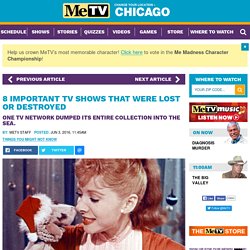 Image: NBC It took a while for networks and studios to fine-tune how to preserve the television shows they produced. Before Lucille Ball and Desi Arnaz introduced the idea of filming television shows on film, studios broadcast the episodes live or on low-quality kinescopes. The primitive method for broadcasting meant a lot of early shows didn't make it past the 1950s. However, that wasn't the only reason certain shows were lost over time. Whether it was due to low-quality film, live broadcasts or negligence by the networks, these eight television shows have been lost or destroyed.

Do you remember watching any of these shows? Mary Kay and Johnny The series broke ground as the first television show to feature a couple sharing the same bed, but it's also noticeable for only having one episode still in existence. The entire DuMont Network. Tune in to long-forgotten DuMont, early rival to NBC and CBS · Wiki Wormhole.