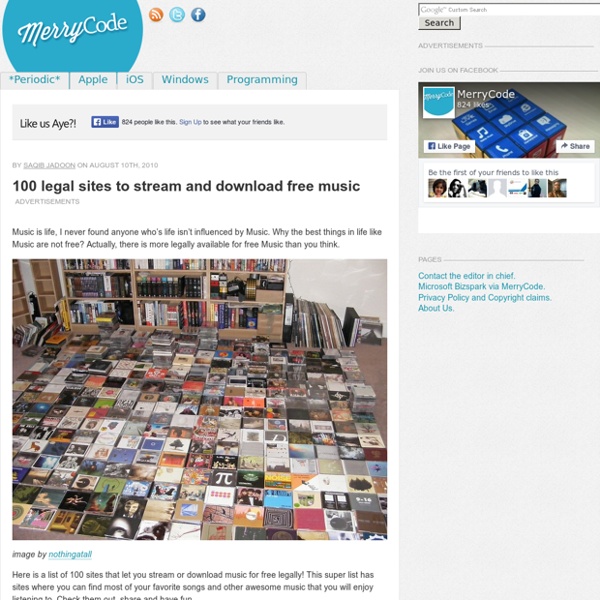 Music is life, I never found anyone who’s life isn’t influenced by Music. Why the best things in life like Music are not free? Actually, there is more legally available for free Music than you think. image by nothingatall Here is a list of 100 sites that let you stream or download music for free legally! This super list has sites where you can find most of your favorite songs and other awesome music that you will enjoy listening to. DeezerDeezer is the French-based service which is one of the largest and very popular music recommendation search engine. 8Tracks awesome site, with last.fm integration! Mog The Most Sophisticated, User-Friendly Music Player on the Web. Clown Basket ClownBasket is the songwriter’s forum to share their own original music with the world. so here is a way for you to get your original music out there! My Band Stock My Band Stock is a type of fan funding tools, where artists raise money from their fan base to record music. ReverbnationReverbnation is huge site.

Vinegar & Water Are All You Need for Super Shiny Hair Used Matches = Killer Smoky Eyes iVillage “Find a matchbook, then light and blow out a match,” advises Nadine Jolie of Nadine Jolie. 100 Greatest Beatles Songs By Elvis Costello I first heard of the Beatles when I was nine years old. I spent most of my holidays on Merseyside then, and a local girl gave me a bad publicity shot of them with their names scrawled on the back. This was 1962 or '63, before they came to America. The photo was badly lit, and they didn't quite have their look down; Ringo had his hair slightly swept back, as if he wasn't quite sold on the Beatles haircut yet.

Animals Are Better Than People. Here Are 15 Unusual Examples Of Adorable Proof. No matter how adorable, dangerous or strange animals are, there is one thing that is for certain: they are better than people. They don’t hold grudges, judge or condescend. Animals don’t ruin your day just because they can. All they want to do is act naturally, and in some cases, when they do, it’s the cutest thing in the world. Take these 15 unique animal friends, for example.

Music Harnesses Emotion to Drive Evolutionary Behavior by Lori Chandler The various milestones of my life are best explained by the soundtrack I was rocking to at the time. In fact, my growth as a person can be documented in great detail by exactly what artist resonated with me at which juncture. Speed Up Your Hearing We surf the net with our eyes, ears and fingers. Eyes offer the largest conduit and while podcasting and audio books just use ears, the ears are best suited for hands-free operation. In addition -- a big plus -- we think better when active because more blood gets to our heads. Also, listening at faster speeds causes a listener to focus more intently on what's being said. Listening at normal speed is then like watching football played at a walking pace. Podcast playback is a process that can be adjusted for speed and pitch correction to prevent the chipmonk effect.

A different way to visualize rhythm - John Varney To learn more on circular perceptions of rhythm with specific reference to African music, read this paper and then watch this Five(ish) Minute Drum Lesson on African Drumming. How has drumming played an essential role in African culture? What do specific rhythms represent? Interested in the software applications of a circular rhythmic approach? What are the pros of representing rhythm with a circular representation as opposed to using a more traditional linear representation? This article will help you learn more. The Sacred Geometry Of Music The Sacred Geometry Of Music by Andrew Lorimer Music uses the laws of vibration to manifest aurally what exists at the center of everything. Into our reality springs a non-visual harmonic law that is universal. The notes and intervals of music speak directly to the chakra centers and causes them to vibrate in harmony to the vibration of a string or vocal chords, speakers moving through the air, or the sound of someone’s lips making a farting noise through a metal tube. Music uses the laws of physics and mathematics to bring out an emotional response in the listener. The music of the Western world uses a mathematical system based on Twelve.