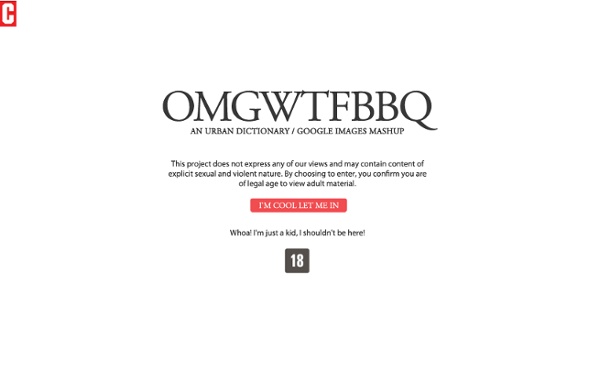 50 Fascinating Things I've Read Lately Pretty simple. When I read something I like, I try to write it down. In no particular order, here are 50 things I've read lately that, for one reason or another, caught my attention. "Today, of Americans officially designated as 'poor,' 99 percent have electricity, running water, flush toilets, and a refrigerator; 95 percent have a television, 88 percent a telephone, 71 percent a car and 70 percent air conditioning. Cornelius Vanderbilt had none of these."

Internet Anagram Server / I, Rearrangement Servant : anagram, anagram, software, anagramme, anagrama, wordplay, word play, anagram creator, anagram solver, anagram finder, anagram generator, anagram maker, anagram unscrambler, anagram machine, crossword, In News:The New York TimesSydney Morning HeraldThe Globe and MailJerusalem Post Did you know that parliament is an anagram of partial men? Or, Clint Eastwood an anagram of Old West Action? Someone once said, "All the life's wisdom can be found in anagrams. Anagrams never lie." 15 Free Guides That Really Teach You USEFUL Stuff Advertisement Over the past months, we’ve written quite a few PDF manuals for you, on all kinds of diverging subjects, including BitTorrent, iTunes, iPhone, Twitter, Mac, Linux, Photoshop and several other topics. Freely available to MakeUseOf subscribers, there are now multiple manuals released every month, for everyone to enjoy. After releasing 15 manuals and nearly half a million downloads we thought it was about time to look back and review what has been published so far. Enjoy! Downloads are free, no strings attached.

Incredible Concept Bike Folds Down to Size of One Wheel If you’ve ever had to lug a bike with you onto the train or bus, or up a steep flight of stairs, you can probably understand the appeal of lightweight folding bikes. But most of them are too light-weight to handle the demands of serious riders. Dominic Hargreaves was having the same struggles with folding bikes, and after failing to find one that he liked, he decided to make one for himself. The result was The Contortionist, a folding bike that twists around to fold itself entirely into the wheels’ 26-inch circumference.

10 Apps That Show Off the iPhone 4S's New Features - Videolicious A new iPhone gets you a faster processor, a better camera for stills and video, enhanced GPS, and Siri, the voice-enabled personal assistant. These apps take advantage of them. A new iPhone means new hardware, and with the 4S, the most notable upgrades are to the processor and the camera. You also get some other goodies like Siri, Apple's voice-enabled personal assistant. 10 Awesome Online Classes You Can Take For Free Cool, but you need iTunes for nearly everything, and that gets an 'F.' Are there really no other places to get these lessons? I was sure there are some on Academic Earth. Flagged 1. 7 of them are available via YouTube.

Removing an object on a photo with GIMP Tutorial to remove objects (or people) and restore the portion of the background they hide in a photo with the Resynthesizer plugin. An impressive video has been posted on Youtube to show how, with Photoshop, it is possible to delete objects in an image automatically, without any design work. The same can be done with The Gimp in fact and for longer (it is not impossible that the same algorithm has been reused). This plugin "re-synthesizes" the background" and rebuilds it from same elements on the photo.

Guitar Lessons for Beginners Archive - Free Guitar Lessons Online - Acoustic and Electric Guitar Lessons The following free guitar lessons have been created with the beginner in mind. It is suggested that new guitarists begin at lesson one, spending at least one week learning the exercises and songs in that lesson before moving on. Learning to relax while playing guitar will help immeasurably, so be sure to have fun! Learning Guitar - Guitar Lesson One Have you always wanted to play guitar, but never got around to actually getting started? Here is reason to begin... a free online guitar lesson, which is essentially the same lesson I teach all new students.

50 Fresh Free Fonts of 2010 Though there's a broad variety of fonts available for download online, designers keep on tracing the fresh ones to enhance their design copy, a website, brochure, or even an advertisement in a brand new an' awesome way. Still, the free stuff could not always boast of good quality – premium goodies always demand some kind of money investment. However, now it's possible to find the appropriate font that's free, clear, beautiful, and effective for design purposes. Many great designers are now offering professional quality fonts completely for free.

How to build your own USB Keylogger Cause I've searched a lot for a project like this, and I haven't find anything around the Web, I would share my experience of my personal USB Keylogger. It's not really a pure "USB" Keylogger (cause USB HID protocol is much more difficult than PS/2 protocol), but it adapt an USB Keyboard to PS/2 port, while (of course) recording the keys pressed. In this way, even if it's discovered by anybody, it should be confused with a normal PS/2 Adapter. That's the final result:

17 Best Icon Resources for Mobile Web Design A stunning and eye-catching icon is an asset to any web design, but icons used in Mobile Web Design become an essential part of the user interface. What makes a mobile icon effective and stimulating is a large shape, unique visual style and the ability to communicate its intended use clearly, without requiring a lot of additional context. Free web elements, especially beautiful icon resources, can be found in nearly every designer’s toolbox. Below are 17 stand-out and free icon resources you can add to your own toolbox to aid in designing brilliant mobile apps and websites. Each set is licensed under a Creative Commons license.