Pop Culture and Parenting. A Grown Up Geek's Webcomic 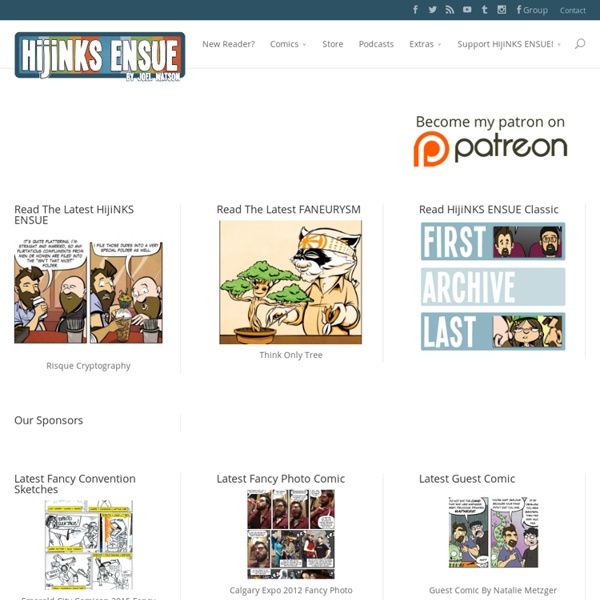 [crossposted from my Patreon Activity Stream] I just received my first Patreon payment: Apr 1, 2014 at 2:00 am+$1,046.52 processed to your account from your patrons.$1,167.30 Pledged / $62.40 CC Fees / $58.38 Patreon …and I just wanted to share some updates about what’s going on with my Patreon and the various rewards I’m currently working on. 3 COMICS A WEEK: So far I’ve been pretty awful at this. So far in March we’ve had a hail storm that damaged both our cars, and our roof.

Tim Ferriss's 4-Hour Workweek and Lifestyle Design Blog I love testing new gadgets and products. It’s an obsession. For The 4-Hour Chef alone, I tested well over $100,000 worth of gear. OCD + Amazon Prime = expensive. Why on earth do I do it? Simple–I love sharing the 5-10 things out of 500-1,000 that really work.

What's New with Phil & Dixie Online Comics Welcome! The comics you'll find here were written and drawn in the 1980's and 1990's. They appeared in Dragon magazine: TSR's Dungeons & Dragons publication. Unsounded AboutComicWorldMiscellanyShop Chapter 12: The Collar of Kasslyne In Which The Question Itself Is Called Into Question Chapter 11: Only A Cause In Which Idealism Gives Rise to Ugly Ideas

First Encounters Page 3 - Table Titans NameNewt Readerman ClassNetromancer RaceHuman throwing a banana cream pie in the face of technology. The Joy of Tech is a comic about technology and pop culture, created by Nitrozac and Snaggy, and updated three times a week. We like to feature the people and events that are making today's tech news. We've been making comics on the web since early 1999, and The Joy of Tech is now in its 12th year. We're very proud to be featured regularly on places like re/code (from the people formally known as AllThingsD), and Folha in Brazil, and Mashable!

5 Websites That Are Sure to Be Entertaining (and Extremely Distracting) With the semester coming to an end, and finals starting soon, this time of the year can be stressful. So, what better way to handle your stress, than to avoid all your responsibilities? Check out these websites listed below to provide yourself some quality entertainment when you need a little distraction from your everyday tasks! 1. Freerice.orgThis is a great website to not only distract you from doing work, but give back at the same time! So how does it work? 21 boredom-busting websites that will entertain you forever Bored with the same old websites? Looking for a few new corners of the Internet to get you fired up with enthusiasm? Well, you’re in luck. Dragon Heroes - Online comic As a kid I wanted to achieve my dream to write, illustrate and publish a book to show people that with hard work anything is possible. I believe that everybody has some kind of dream and seeing that someone else achieving their dream would give them hope. I have now published two books and Dragon Heroes were one of my other projects with this purpose. If the projects I have done have given hope to at least one person, that would be enough. I'm a university student in my twenties now and I feel that I should leave this task to younger ones. And not only because school and part-time jobs take most of my time.

50 Social News Websites: There are a great deal of social news sites on the internet, sometimes too many. Most of them are dormant and are no longer active, largely because they were poorly marketed and hence, never had an active community of users in the first place. You want a community that gives you fresh news on topics you care about.