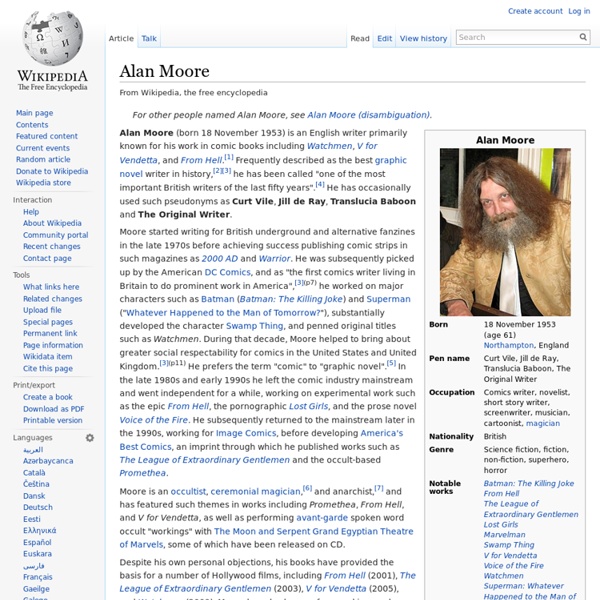 Alan Moore (born 18 November 1953) is an English writer primarily known for his work in comic books including Watchmen, V for Vendetta, and From Hell.[1] Frequently described as the best graphic novel writer in history,[2][3] he has been called "one of the most important British writers of the last fifty years".[4] He has occasionally used such pseudonyms as Curt Vile, Jill de Ray, Translucia Baboon and The Original Writer. Moore is an occultist, ceremonial magician,[6] and anarchist,[7] and has featured such themes in works including Promethea, From Hell, and V for Vendetta, as well as performing avant-garde spoken word occult "workings" with The Moon and Serpent Grand Egyptian Theatre of Marvels, some of which have been released on CD. Early life[edit] "LSD was an incredible experience. Alan Moore (2003)[2](pp19–20) In the late 1960s Moore began publishing his own poetry and essays in fanzines, eventually setting up his own fanzine, Embryo. Career[edit] Early career: 1978–1980[edit] Related:  Littérature

Mina Harker In the novel[edit] She begins the story as Miss Mina Murray, a young school mistress who is engaged to Jonathan Harker, and best friends with Lucy Westenra. She visits Lucy in Whitby on July 24 of that year, when schools would have closed for the summer. After her fiancé Jonathan escapes from Count Dracula's castle, Mina travels to Budapest and joins him there. Mina cares for him during his recovery from his traumatic encounter with the vampire and his brides, and the two return to England as husband and wife. Mina and Jonathan join the coalition around Abraham Van Helsing, and turn their attentions to destroying the Count. Dracula flees back to his castle in Transylvania, followed by Van Helsing's gang, who kill him just before sunset. In other media[edit] Mina (or a similar character) has appeared in most film adaptations of Stoker's novel. In Stoker's original novel, Mina Harker recovers from the vampire's curse upon Dracula's death. Books[edit] Film[edit] In F. TV[edit] Music[edit]

V for Vendetta Publication history[edit] When the publishers cancelled Warrior in 1985 (with two completed issues unpublished due to the cancellation), several companies attempted to convince Moore and Lloyd to let them publish and complete the story. In 1988, DC Comics published a ten-issue series that reprinted the Warrior stories in colour, then continued the series to completion. The first new material appeared in issue No. 7, which included the unpublished episodes that would have appeared in Warrior No. 27 and No. 28. Background[edit] David Lloyd's paintings for V for Vendetta in Warrior originally appeared in black-and-white. Cover of Warrior#19, highlighting the comic's conflict between anarchist and fascist philosophies. In writing V for Vendetta, Moore drew upon an idea for a strip titled The Doll, which he had submitted in 1975 at the age of 22 to DC Thomson. Plot[edit] Book 1: Europe After the Reign[edit] Book 2: This Vicious Cabaret[edit] Book 3: The Land of Do-As-You-Please[edit] V[edit]

Gustave Doré Paul Gustave Louis Christophe Doré (/dɔːˈreɪ/; French: [ɡystav dɔʁe]; 6 January 1832 – 23 January 1883) was a French artist, printmaker, illustrator and sculptor. Doré worked primarily with wood engraving. Biography[edit] «Le Christ quittant le prétoire» Doré was born in Strasbourg on 6 January 1832. By age five, he was a prodigy troublemaker, playing pranks that were mature beyond his years. Les Oceanides Les Naiades de la mer, 1860s In 1853, Doré was asked to illustrate the works of Lord Byron.[2] This commission was followed by additional work for British publishers, including a new illustrated English Bible. In the 1860s he illustrated a French edition of Cervantes's Don Quixote, and his depictions of the knight and his squire, Sancho Panza, have become so famous that they have influenced subsequent readers, artists, and stage and film directors' ideas of the physical "look" of the two characters. The completed book, London: A Pilgrimage, with 180 engravings, was published in 1872.

Allan Quatermain Allan Quatermain is the protagonist of H. Rider Haggard's 1885 novel King Solomon's Mines and its various prequels and sequels. Allan Quatermain was also the title of a book in this sequence. History[edit] Allan Quatermain, having waited until the last minute, orders his men to fire in this illustration by Thure de Thulstrup from Maiwa's Revenge (1888) The character Quatermain is an English-born professional big game hunter and occasional trader in southern Africa, who supports colonial efforts to spread civilization in the Dark Continent, though he also favours native Africans having a say in their affairs. In the earliest-written novels, native Africans refer to Quatermain as Macumazahn, meaning "Watcher-by-Night," a reference to his nocturnal habits and keen instincts. Appearance and character[edit] The series spans 50 years of Quatermain's life, from 18 to 68; at the start of the foundation novel King Solomon's Mines, he has just turned 55. Series[edit] Allan Quatermain (1887)[edit]

Nineteen Eighty-Four History and title[edit] A 1947 draft manuscript of the first page of Nineteen Eighty-Four, showing the editorial development. The Last Man in Europe was an early title for the novel but in a letter dated 22 October 1948 to his publisher Fredric Warburg, eight months before publication, Orwell wrote about hesitating between The Last Man in Europe and Nineteen Eighty-Four.[14] Warburg suggested changing the main title to a more commercial one.[15] Copyright status[edit] The novel will be in the public domain in the European Union and Russia in 2021 and in the United States in 2044.[21] It is already in the public domain in Canada;[22] South Africa,[23] Argentina[24] Australia,[25] and Oman.[26] Background[edit] The banner of the Party in the 1984 film adaptation of the book (I) the upper-class Inner Party, the elite ruling minority, who make up 2% of the population. As the government, the Party controls the population with four ministries: Plot[edit] Characters[edit] Principal characters[edit]

Dieter Rams Rams at the 50th Anniversary of Braun Innovation exhibition, Boston 2005 Life and career[edit] Rams began studies in architecture and interior decoration at Wiesbaden School of Art in 1947. Soon after in 1948, he took a break from studying to gain practical experience and conclude his carpentry apprenticeship. He resumed studies at Wiesbaden School of Art in 1948 and graduated with honours in 1953 after which he began working for Frankfurt based architect Otto Apel. In 1955, he was recruited to Braun as an architect and an interior designer. Dieter Rams was strongly influenced by the presence of his grandfather, a carpenter. By producing electronic gadgets that were remarkable in their austere aesthetic and user friendliness, Rams made Braun a household name in the 1950s. In 2010, to mark his contribution to the world of design, he was awarded the 'Kölner Klopfer' prize by the students of the Cologne International School of Design. Dieter Rams: ten principles for good design[edit]

List of The League of Extraordinary Gentlemen characters Overview[edit] Character's name Original source/authorAppearances or mention in the League universeBrief biography/overviewNotes The appearances key is: V1I1: Volume I, Issue #1 (example)V1C: Volume I cover (example)V1I2BC: Volume I, Issue #2, Back Cover (example)V1S: Volume I supplemental materials (example)ASV: Allan and the Sundered VeilNTA: The New Traveller's AlmanacBD: The Black DossierMIM: Minions of the MoonNHI: Nemo: Heart of IceNRB: Nemo: The Roses of BerlinT: Tales of The League of Extraordinary Gentlemen An italicised appearance is either a graphic novel or film appearance where the character is only mentioned in dialogue or otherwise referenced but not shown or a text story appearance where the character is mentioned either briefly or indirectly. A[edit] Alice's Adventures in Wonderland and Through the Looking-Glass, Lewis CarrollNTAMentioned in The New Traveller's Almanac, which suggests that Wonderland is somewhere underneath England and/or in a parallel universe. Ayesha[edit]

George Orwell English author and journalist Eric Arthur Blair (25 June 1903 – 21 January 1950),[1] better known by his pen name George Orwell, was an English novelist, essayist, journalist and critic, whose work is marked by lucid prose, awareness of social injustice, opposition to totalitarianism, and outspoken support of democratic socialism.[2][3] Life Early years Blair family home at Shiplake, Oxfordshire Eric Arthur Blair was born on 25 June 1903 in Motihari, Bihar, British India.[7] His great-grandfather, Charles Blair, was a wealthy country gentleman in Dorset who married Lady Mary Fane, daughter of the Earl of Westmorland, and had income as an absentee landlord of plantations in Jamaica.[8] His grandfather, Thomas Richard Arthur Blair, was a clergyman.[9] Although the gentility passed down the generations, the prosperity did not; Eric Blair described his family as "lower-upper-middle class".[10] In 1904 Ida Blair settled with her children at Henley-on-Thames in Oxfordshire. Policing in Burma Statue

Edward Gorey Edward St. John Gorey (February 22, 1925 – April 15, 2000) was an American writer and artist noted for his illustrated books.[1] His characteristic pen-and-ink drawings often depict vaguely unsettling narrative scenes in Victorian and Edwardian settings. Early life[edit] In the early 1950s, Gorey, with a group of recent Harvard alumni including Alison Lurie (1947), John Ashbery (1949), Donald Hall (1951), and Frank O'Hara, amongst others, founded the Poets' Theatre in Cambridge, which was supported by Harvard faculty members John Ciardi and Thornton Wilder.[3][4][5] He frequently stated that his formal art training was "negligible"; Gorey studied art for one semester at the School of the Art Institute of Chicago in 1943. Career[edit] His first independent work, The Unstrung Harp, was published in 1953. The New York Times credits bookstore owner Andreas Brown and his store, the Gotham Book Mart, with launching Gorey's career: "it became the central clearing house for Mr. Personal life[edit]

Griffin (The Invisible Man) Dr Jack Griffin is a fictional character, also known as The Invisible Man, who appears as the protagonist in H.G. Wells' 1897 science fiction novela The Invisible Man. In the original novel, Griffin is a scientist whose research in optics and experiments into changing the human body's refractive index to that of air results in his becoming invisible. The character has become an iconic character, particularly in horror fiction, and versions of it have appeared throughout various media. Griffin is a gifted young university medical student with albinism, who studies optical density. He believes he is on the verge of a great scientific discovery, but feels uncomfortable working under his professor. To finance his experiments, Griffin robs his own father. Now driven insane by his inability to reverse the experiment, Griffin seeks assistance from a tramp named Thomas Marvel. Furious, Griffin vows to kill Kemp. Jack Griffin works for Dr. The Invisible Man appears in Mad Monster Party?