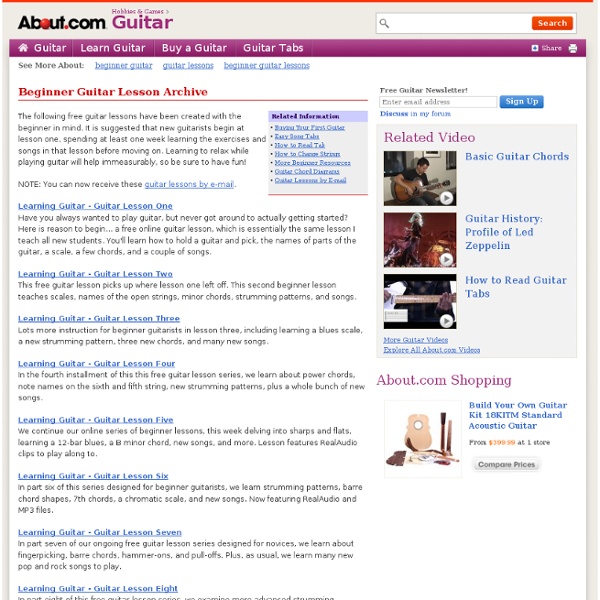 The following free guitar lessons have been created with the beginner in mind. It is suggested that new guitarists begin at lesson one, spending at least one week learning the exercises and songs in that lesson before moving on. Learning to relax while playing guitar will help immeasurably, so be sure to have fun! Learning Guitar - Guitar Lesson One Have you always wanted to play guitar, but never got around to actually getting started? Here is reason to begin... a free online guitar lesson, which is essentially the same lesson I teach all new students. Learning Guitar - Guitar Lesson Two This free guitar lesson picks up where lesson one left off. Learning Guitar - Guitar Lesson Three Lots more instruction for beginner guitarists in lesson three, including learning a blues scale, a new strumming pattern, three new chords, and many new songs. Related:  Entertainment

10 Apps That Show Off the iPhone 4S's New Features - Videolicious A new iPhone gets you a faster processor, a better camera for stills and video, enhanced GPS, and Siri, the voice-enabled personal assistant. These apps take advantage of them. A new iPhone means new hardware, and with the 4S, the most notable upgrades are to the processor and the camera. You also get some other goodies like Siri, Apple's voice-enabled personal assistant. The iPhone 4S has only been available for a little more than a week, but you can already find some apps that have been designed specifically to take advantage of the phone's new dual-core A5 processor. Perhaps even more notable are the upgrades to the iPhone's camera. Also new and exclusive to the iPhone 4S is Siri, Apple's voice-activated personal assistant who can schedule appointments, find you a good slice of pizza, tell you the local time in China, and more. If you're getting an iPhone 4S now, these apps—many of them free—will really show you what your new phone can do.

HTML & CSS From Scratch in 30 Days This class is perfect for anyone with a great website idea or just an interest in learning how to code. This is a beginner-level class so if you have basic computer literacy and an internet connection, you're all set. Learn at your own pace. You'll leave this class with the skills to create your very own stylish, professional, and responsive website. What You Will Learn HTML and Web Fundamentals. What You'll Make Spread throughout the course are Code Challenges. Handouts and Resources You will be provided with extensive handouts and suggested reference materials to continue your learning even after the course.

List of songs considered the best This list of songs considered the best includes the top 10 positions from a variety of published results. While there is no general agreement regarding the greatest "song" and no uniform criteria for evaluating results, many publishers and organizations have produced these lists—of songs considered the best. The inclusions in this article are attributed to a reliable source who independently affirms the creditability of the survey, poll, or critique that was used. Published best song lists[edit] Bests of all time (non genre-specific)[edit] Rolling Stone's "500 Greatest Songs of All Time"[edit] The "500 Greatest Songs of All Time" was the cover story of a special issue of Rolling Stone; issue number 963, published December 9, 2004—a year after the magazine published its list of the "500 Greatest Albums of All Time". Q magazine's "1001 Best Songs Ever"[edit] The 1001 best songs ever was the subject of a 2003 special edition of Q magazine. MAX TV's "1000 Greatest Songs of All Time"[edit] [edit]

Gibson's Learn & Master Guitar | Learn to Play Guitar at Home with DVD Lessons | Acoustic & Electric 2011 Acoustic Guitar Magazine’s Player’s Choice Award for Best Instructional MaterialAcousticGuitar.com The Gibson name has stood for superior quality in musical instruments for decades now. With Gibson's Learn & Master Guitar, taught by guitar pro Steve Krenz, that tradition of excellence continues. Gibson's Learn & Master Guitar course is known as the most complete course available for learning guitar. It is the winner of the 2011 Acoustic Guitar Magazine ‘Players' Choice’ GOLD Award, two Telly Awards, and an AEGIS Award for Excellence in Education. What's Inside: 20 professionally filmed DVDs in HD with over 40 hoursof instruction.5 Jam-Along CDs.100+ page lesson book.Unlimited access to our online student support site. Gibson’s Learn & Master Guitar is designed for all skill levels. The Alternatives If you have looked online for guitar courses, you have probably seen a lot of thirty-minute "Learn Guitar Overnight" videos. Not a beginner guitarist? The DVD's Topics Covered Styles Covered

50 Fascinating Things I've Read Lately Pretty simple. When I read something I like, I try to write it down. In no particular order, here are 50 things I've read lately that, for one reason or another, caught my attention. "Today, of Americans officially designated as 'poor,' 99 percent have electricity, running water, flush toilets, and a refrigerator; 95 percent have a television, 88 percent a telephone, 71 percent a car and 70 percent air conditioning. Cornelius Vanderbilt had none of these." "As late as the 1950s, New York's garment industry was the nation's largest manufacturing cluster. "If everyone worldwide had the same chance of becoming a billionaire, you'd expect the chance of a billionaire child having a billionaire parent to be one out of 9.3 million. "Two married 66-year-olds with roughly average earnings over their lives will end up paying about $110,000 in dedicated Medicare taxes through the payroll tax, including the portion their employers pay. "Don't have $7.5 million?

Learning Guitar Beginners Lesson(2) - Ode To Joy & Let It Be Aprender Guitarra Free HD South Asian Movies Forever 100% Free. Paa 13 comments Mod 11 comments How Startup Valuation Works - Illustrated How would you measure the value of a company? Especially, a company that you started a month ago – how do you determine startup valuation? That is the question you will be asking yourself when you look for money for your company. Create an infographic timeline like this on Adioma Let’s lay down the basics. Why does startup valuation matter? Valuation matters to entrepreneurs because it determines the share of the company they have to give away to an investor in exchange for money. How do you calculate your valuation at the early stages? Figure out how much money you need to grow to a point where you will show significant growth and raise the next round of investment. How to Determine Valuation? Seed Stage Early-stage valuation is commonly described as “an art rather than a science,” which is not helpful. Traction. Reputation. Revenues. For consumer startups having a revenue might lower the valuation, even if temporarily. Hotness of industry. Not necessarily. It comes down to two strategies.

Rockschool guitar grade 1 scales 2012-2018 syllabus « Guitar Lessons in Dumfries as well as Skype and FaceTime online guitar lessons If you are thinking about doing a Rockschool exam you are going to have to learn some scales! Scales are a great way of finding your way around the fingerboard and come in handy for the improvisation and interpretation section of the exam. At grade 1 there are 5 scales to learn. These are all in open position. This means they include open strings. They are also all 1 octave. First of all lets have a look at the TAB for the scales. Once you have learned the scales you can play around with the notes inside the scales to help solidify the shapes in your mind and fingers. Please feel free to download the free pdf version of the scales. Remember to practice your scales whenever you pick up your guitar to practice! Once you can play your scales fluently it’s a good idea to play them in random orders.

5 Pranks to Play on Your Friend's iPhone When attempting to prank your friends, stealth is key. You also have to really want to make them feel as much pain and humiliation as possible. Luckily, the existence of smartphones can help a lot. Besides the old-fashioned and, lets be honest, predictable method of simply hacking a friend's Facebook or Twitter, the iPhone's features make it particularly well-suited for pranks. Because we're firm believers in a good prank, we've come up with six great ways to prank your friend's iPhone. Have any more phone pranks for making your loved ones miserable? 1. Image: Mashable A quick and easy, the ol' "stuck in the phone" lock screen bit is a modern classic, and requires little effort on your part. 2. If you're looking to infuriate your friends and potentially cause them some really awkward text conversations with their contacts, you should consider the autocorrect dictionary prank. Don't worry, some day they'll look back at this and laugh. 3. Image: Flickr, jesse757 No-brainer here. 4. 5.